League Of Rock – The Training Wheels Are Off! 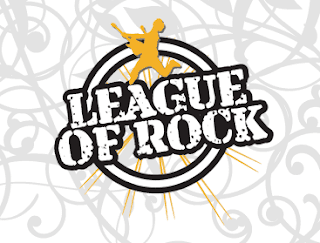 Back for another installment on my own personal “Rock Star” journey. Last night was practice number 2 at the Rehearsal Factory in Toronto.

This last week was spent jamming out on our songs along with my CD’s and emailing back and forth trying to really get a handle on what our 4th song was going to be. Last week we left practice with a pretty clear decision that Pearl Jam’s Black filled the final spot, but as we packed up our gear that night a couple other suggestions were thrown into the pot.

At some point on Sunday the emails started flowing once again to discuss our song choices and the Janis Joplin tune “Move Over” was brought up once again. This was one of the very first songs that was mentioned back during our Jab night. Absolutely loving that song I thought it was perfect, until I got home and looked at it. That idea was subsequently dropped as I deemed it to be completely put of my wheelhouse. As mentioned before, I am no Geddy Lee on the bass and didn’t want to embarrass myself and my band. 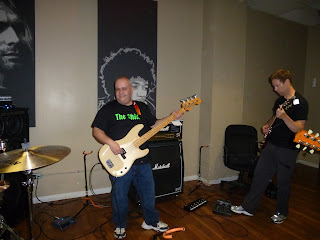 I was now in a serious dilemma, I love the song, I know it would totally showcase Laurie’s vocals and would work well with our other three songs BUT! I really wasn’t sure if I could make it work. I told the guys that I didn’t want to be the reason we weren’t considering this song but I didn’t even know where to begin. I suggested maybe we could use this week’s coach to possibly teach me the basics for this song so we could at least attempt it. 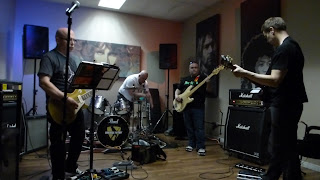 The guys in the band really encouraged me, and suddenly I felt it was gut check time. I didn’t want to let them down and I needed to learn this song. Tuesday was my day off from work and I began the somewhat painful process of trying to piece this baseline together. I will say that I called Janis more than a few bad names  but little by little I “Frankenstein’d” the song together. Suddenly it started to gel and dammit, it started to feel good. I decided to celebrate my own personal victory by heading downtown on a mission. I ordered my own custom, one of a kind “SHINE” World Tour 2013 T-Shirt. C’mon, if I am going to be in a band I better have my own tour shirt.

I was pumped and ready to roll for our next practice as we unpacked out gear into the “Legends” room at the Rehearsal Factory. We tuned up and got to right work on our first tune which would set the frustrating tone for most of the evening.

Personally I struggled to find the groove. I know we made some headway in the right direction but it wasn’t until late into the night that I started to flirt with that euphoric feeling I felt the previous week. It just never quite got there.

Our coach this week was Amanda Bentley, and in my opinion she really imparted some great wisdom and being a bass player herself she shared a few techniques and pointers for me and our drummer that we will certainly get to work on. One of the most important lessons she taught me was to embrace my  “bass face” and feel the song. I should have recorded her saying this as my daughter teases me about my expressions while I practice. So now I know the “bassface” is not only me! Thanks Amanda, and sorry Meagan I am not constipated, I am feeling the song. 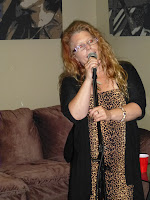 After that we chugged along, working through all of our 4 songs with varying degrees of success. It dawned on me that playing with other musicians is so very different than my time at home with my CD’s. I can only relate it to riding a bicycle. At home my Cd’s are the training wheels, their perfection is my safety net and when I go off track I can always find my way back. With the band the training wheels are off and in the words of David Lee Roth, “We’s a freewheelin”!

This is where I found myself this week. We seemed to be following one another and as someone slid off the track, we tended to all follow and the road got bumpy sometimes derailing completely. Nobody said this was going to be easy, hell if it was we’d all be rock stars. When I left practice it was clear, I have a lot more to learn before I hit the stage but I am more determined than ever to learn to ride without the training wheels. In the words of Bon Scott, “It’s a long way to the top, if you want to rock n roll!”….