Rat Pak Records is set to unleash a new hard rock offering that’s sure to make waves upon the musical landscape on October 29th, 2013.  Citing major influences such as Rob Zombie and Motorhead, which can immediately be heard throughout the record, Beasto Blanco’s Live Fast Die Loud exhibits the volume to 11, fist pumping anthem power and attitude of rock and roll that’s sorely lacking in today’s market place.  Think of Beasto Blanco as the offspring result if White Zombie and Motorhead got a little too drunk while camping in the woods and sleeping in the same tent.

Chuck Garric, who has spent the last 12 years as the bassist for Alice Cooper, a position he still holds today, leads the project.  Chuck has appeared on and co-written songs for the albums Eyes of Alice Cooper, Dirty Diamonds, Along Came a Spider and Welcome to My Nightmare II.  Spending time with current KISS drummer Eric Singer and his project ESP (Eric Singer Project) as well as working with Dio and L.A. Guns as a touring bassist, Garric has also worked with Damon Johnson’s brainchild from the 90’s, Brother Cane when they reunited for shows in 2011.

For Garric’s project Beasto Blanco he has delved deeply into the Alice Cooper family and recruited the likes of Glen Sobel, currently the drummer with Alice Cooper, who has played with numerous other big names and Jonathan Mover, Alice Cooper drummer from the 90’s who stepped in for an injured Sobel during the 2012 tour with Iron Maiden.  In the producer’s chair is Tommy Henriksen who has been Alice Cooper’s guitarist since 2011 and is a sought after producer and songwriter, having worked with a whole host of artists.  Cooper’s eldest daughter, 32 year old Calico Cooper also plays a role in Beasto Blanco.  Chris Latham, an accomplished recording engineer and guitarist from the California based band Paperback Hero handles the guitar work here. 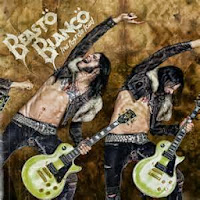 The streaming link that I received to preview the album is missing the first track, “Ill Nostro Spirito”, so my listen begins with song number two, “Beasto Blanco”.  It starts off with a Motorhead style sound quickly evolving once the Rob Zombie-esque vocals kick in.  The track is fast, with a female voice that sounds almost like a child accenting the chorus.  “Bloodshot” is next and seems to cover the evils of too many drinks after a breakup the night prior.  Track #4, “California” keeps the pace ramped up exhibiting more hooks, musically and vocally.  “Breakdown”, probably the absolute stand out cut of the album in my opinion takes the listener through a Zombie-esque ride ala “Dragula”.  Ted Nugent also 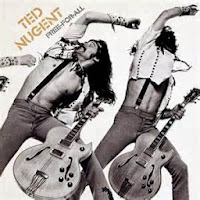 plays a role in the shaping of this record, not limited to the cover tribute of his 1976 Free For All album and “Vegas Baby Vegas” takes us through to the awesome, grinding, filled with power waiting to be unleashed “Motor Queen”.  “Freaks” is next on the list, abound with hooks and riffs once again and guaranteed to get your fist pumping in the air.  The Motorhead style of “Beg to Differ” leads us into the album’s title track, “Live Fast, Die Loud” and closes up with the driving anthem of “No More Man”.  All in all a fantastic listen, far, far superior to Rob Zombie’s latest lack lustre offering, Venomous Rat Regeneration Vendor in my opinion. 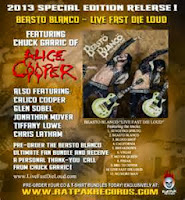 The praises of Beasto Blanco are being sung by the likes of actor Johnny Depp, Iron Maiden drummer Nicko McBrain, Motorhead drummer Mikkey Dee, famed producer Bob Ezrin, John Corabi and even Alice Cooper himself!  Live Fast, Die Loud is available for pre-order from Rat Pak Records and comes in a variety of options including, but not limited to the “ultimate fan bundle”.  The package is equipped with the CD, a limited print lyrics and picture book, official concert shirt, sticker, Chuck Garric limited print guitar pics, Beast Blanco diamond plated ball cap and even a personal thank-you telephone call from Chuck Garric himself!