Meister's "Views of the Cruise" – Volume #10 – Planning The Debauchery

Ladies and gentlemen, boys and girls, children of all ages, the Monsters of Rock: The Lost Weekend cruise is fast approaching with a little more than a week away now.  For those of you joining me for the first time here with my “Views of the Cruise” blog articles, I am commonly known as the Meister and I was fortunate enough to take part in last years adventure, Monsters of Rock: The Voyage.  If you have not already done so, please feel free to head over to my first blog in this series to read all about my adventures and mishaps aboard the ship, the MSC Poesia during last year’s cruise. (2012 RECAP).
MEISTER’S “VIEWS OF THE CRUISE” – VOLUME #10 – PLANNING THE DEBAUCHERY 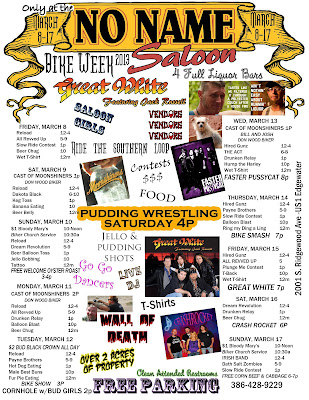 I am from just north of Toronto, Ontario, Canada and will be abandoning my snowy homeland and making the trek down to sunny Florida, arriving on March 13th.  The first order of business upon arrival, after securing my hotel room of course, is to meet up with some cruise friends, some of whom I’ve chatted extensively with on Facebook, but never met in person and some of whom I met on my trip to Memphis this past November for Tora Tora’s 25th anniversary.  There is a group of us that are trekking from Fort Lauderdale to Edgewater, about four hours away, to catch Faster Pussycat on the night of the 13th.  Look at the promo poster for the event that I attached here:  there certainly are a few things going on that look fun and interesting, but the “Cornhole w/bud girls” scheduled for Tuesday raises some questions!  I will also get to see Faster Pussycat play Toronto shortly after the cruise on March 31st with the incredible local band Diemonds opening, who would also be an excellent addition to the cruise (DIEMONDS). 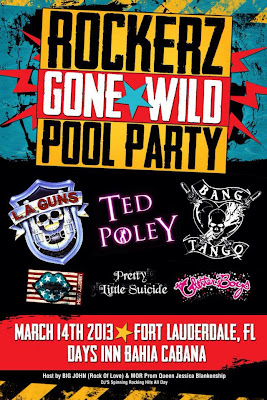 Next up on my agenda of metal and mayhem is The Rockerz Gone Wild Pool Party taking place on March 14th at the Days Inn Bahia Cabana Resort in Fort Lauderdale.  This party is presented by one of our fellow cruisers who has worked hard to get this thing off the ground and planned lots of fun and debauchery.  Things get under way at 2pm with meeting Decibel Geek cohort Cynthia Johnson along with some of my fellow party goers, cruisers and probably rockers while enjoying cocktails at the tiki bars in the brilliant Florida sunshine.  I’ve heard that Ted Poley, the voice of Danger Danger, has volunteered to be the official lifeguard while Joe Leste of Bang Tango has signed on to be the official bikini inspector…..aaaahhh, debauchery abound!  The bands start around 4pm, boasting six acts in total including Glitter Boys, Pretty Little Suicide, Liberty Lush, Bang Tango, Ted Poley and L.A. Guns!  With Bang Tango (also playing Toronto post cruise March 23rd), Ted Poley and L.A. Guns being on the cruise as well and Faster Pussycat the night before, seeing these great bands now will free up some time for me aboard ship as last year I had to agonize over conflicting schedules and which band to see over another.  The event is also hosted by Big John from Rock of Love and he will be on hand signing autographed photos for a $10 donation to the Wounded Warrior Project.  An L.A. Guns autographed guitar is also expected to be raffled off.  At the time of posting this, there were still a FEW tickets available, check out the official website here: ROCKERZ GONE WILD 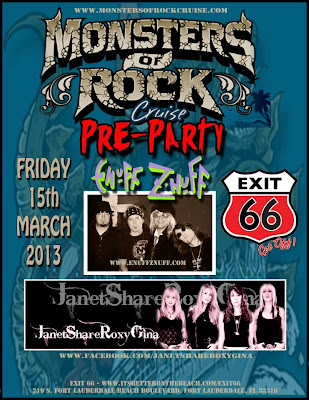 Wow, what a start for the first two days of my rock vacation!  I’ll probably be taking a little extra time to lie in on Friday, March 15th as I sleep off the effects of what I’m sure will be an extremely high intake of frosty adult beverages.  There is a gym near-by that part of me would like to hit on that morning, but I get the feeling that it will fall by the wayside in favour of the study of the backs of my eye lids!  Hopefully I will be able to schedule an interview or two with some of last nights performers for this morning, but if not I’m sure that I will find some trouble to occupy my time with….it is spring break after all!  I won’t have too long to amuse myself as the Official M.O.R. Pre-Party takes place later that night at Exit 66 right on the beach.  Last year I joined the ship’s registry late in the game and the Kix hosted pre-party was sold out, so I missed it.  That ain’t happening this time around, I’m not the brightest, but sometimes I do learn from my mistakes…lol!  This year’s event features performances by Enuff Z’nuff and JSRG (3/4 of the original Vixen).  That makes another two bands that I can knock off the list of performers aboard ship, which should make it really easy to catch all of the bands involved over this trip and some more than once!

There’s nothing like the feeling of live music, I’m a music junkie and I love this genre of music, it’s my passion!  While I do appreciate some select artists or songs from other genres, it’s hard rock and metal that powers my life and makes me who I am.  So, to free up even more breathing room for the band schedule I’ll be catching Queensryche in Toronto this coming Thursday, March 7th as well.  While I’ve seen Queensryche several times over the past years, this will be the first experience for me sans Geoff Tate after all the drama surrounding his departure from the band.  I saw reported somewhere that they, with new front man Todd LaTorre, will only be performing material from the first five albums of their catalogue   Thank God as this is the far superior of their work and they lost me along the way with some of the more recent releases. 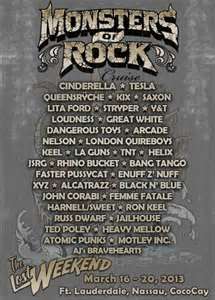 Last year one of the driving forces of me trekking out to the cruise was Y&T.  They are one of the first bands I heard as a kid and have never had the opportunity to see them live.  Somehow, with the last minute sc
hedule changes due to Lynch Mob and Stryper being snowed in and missing the departure time, I managed to succeed in missing both Y&T shows!  Another mistake that I’ve learned from!  And if all else fails on this cruise and somehow I manage to bungle it all up again and miss them, I have a back- up with tickets to their post cruise performance in Toronto on March 26th!

So, now I wait (impatiently) for the band schedule to be released so that I may pour over it and plan out my shows and events aboard the MSC Poesia for this year’s voyage.  Last year the schedule came about a week before cruising, so that’s any time now!  The cruise documents and official paperwork have already been received and my packing of the important stuff has begun.  CD covers, record sleeves, concert tour books, silk band flags, DVD slipcases and band photos are all sorted and ready to go, hunting for autographs, you know…the important stuff!  Two pair of shorts and a couple t-shirts and my clothes are packed, anything else I need, I’ll buy there….lol

Rest assured, however that even though I will be on holidays I will still be working hard for Decibel Geek and plan to bring you a daily diary of my experiences aboard ship, if I’m coherent enough to type that is….lol.