Brothers and sisters, the apocalypse is descended upon us. The Metalocalypse that is…

So, I started watching this show titled Metalocalypse on recommendation from someone I find intriguingly fantastic. They’ve turned me onto a few things in recent times, and I’m better for it. This is just one in that long string of home runs. Astounded to discover that I’ve never heard of Metalocalypse, I was immediately told I had to check it out. The show originally broadcast on the Cartoon Network‘s Adult Swim starting back in 2006! Why had I never heard of this nor heard any friends speak of this? Is it because we are Canadian and maybe didn’t get this up here? No idea, but I’m here to right the wrong.

The show, as I said, began in 2006 and lasted for four seasons of 61 episodes and one special. Each episode is less than 15 minutes long and created with flash animation. Series creators Brendon Small (a musician himself) and Tommy Blacha perform many of the voiceovers. Known names Mark Hammill and Malcolm McDowall also lend their vocals. The premise of Metalocalypse follows the fictitious Death Metal band Dethklok, most episode titles even containing “klok” or “deth”. 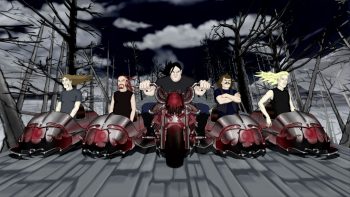 Dethklok (in Metalocalypse) is half American/half Scandinavian consisting of Nathan Explosion (vocals), Skwisgaar Skwigelf (guitar), Pickles (drums), William Murderface (bass) and Toki Wartooth (guitar). In real life, Dethklok is Brendon Small (series creator and writer). Music written by Small was credited to the band and used in episodes of the show. In 2007 a full album appeared simply titled The Dethalbum. In 2009 Dethalbum II surfaced. 2012 saw Dethalbum III and 2013 served us The Doomstar Requiem: A Klok Opera.

At first, I admit that I was a little apprehensive. I mean, Death Metal is not really my buzz. And the classification of “Melodic Death Metal” is just plain oxymoron dumb. Like that CGCM Podcast episode where we created “Fart Metal”. I chuckled during the first short episode and found myself compelled to continue forward. I struggled to hear or discern the voices at times, especially that of bass player William Murderface. But by episode three Metalocalypse had its hooks in deep. 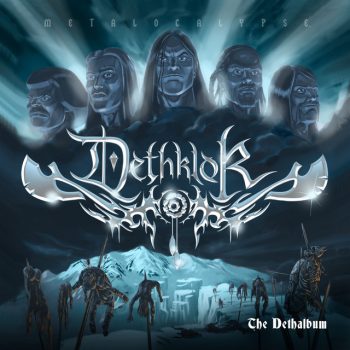 Loaded with unnecessary splatter and absurdities eliciting many a chuckle, each show features an over the top depiction of metal chock full with false statements. I love how it makes fun of the perception that “normal” folks have about our music and culture. Even though Death Metal is not my thing, the cultural stereotypes surrounding it are the same.

In the show, Dethklok is massive, bigger than The Beatles and a massive force on earth. The fans rabidly show their fanship by doing literally anything for the band, usually to comedic even if dark or macabre results. The dangers of death or dismemberment at Dethklok concerts is so high that ticket holders must sign a “Pain Waiver” prior to entry. Throughout the series (at least what I’ve watched so far) the band is depicted as, shall we say, a few sandwiches short in the picnic basket. A death metal version of Spinal Tap. But that doesn’t seem to affect the influences they have. A government group often tries to stop Dethklok by infiltrating the band with a “specialist”. The “specialist”, like maybe a record producer, is sent in by the collective government group with instructions to report back to the council.