What were some of the first bands/artists that you became a fan of and why?

My parents were young and into Rock-N-Roll, so I grew up listening to an array of good music like The Beatles, The Cars, Janis Joplin, Rolling Stones, Black Sabbath, Eric Clapton, etc. I think Tom Petty had my heart though. Damn The Torpedos never gets old. He has an attitude and a presence that stuck with me. I got his guitar tablature book when I decided I wanted to learn and tried playing “Even The Losers” over and over again. Most of his stuff is A, G, C. I realized it doesn’t have to be rocket science to write a song. I never did learn how to play anyone else’s songs but my own.

As soon as I was old enough to go hang out on my own in the East Village and figure out ways to get into the clubs, The Lunachicks, Fur and DGeneration made a big impression on me. The Lunachicks and Fur got me because I never was a witness, up close and personal, to powerful females not giving a f**k and doing their thing on stage.

What made you decide to pursue a career in the music industry and why?

I didn’t learn how to play when I was a kid. I didn’t understand music classes and I didn’t think I could ever play. When I was in 6th grade, we had to write down what we wanted to be. I said I wanted a career in music. It gave me a print out on how to, one day, be in the Philharmonic. I felt misunderstood.

Being a fan of music, I have managed, promoted, roadied, etc. for music companies and bands. I didn’t know how to play though.

In the early 2000s, I learned about Betty Blowtorch and got to know their lead singer and bass player, Bianca Halstead. She had a rough life and started playing in her mid 20s after she got sober. She inspired me and I started to learn how to play after she passed away in December 2001. 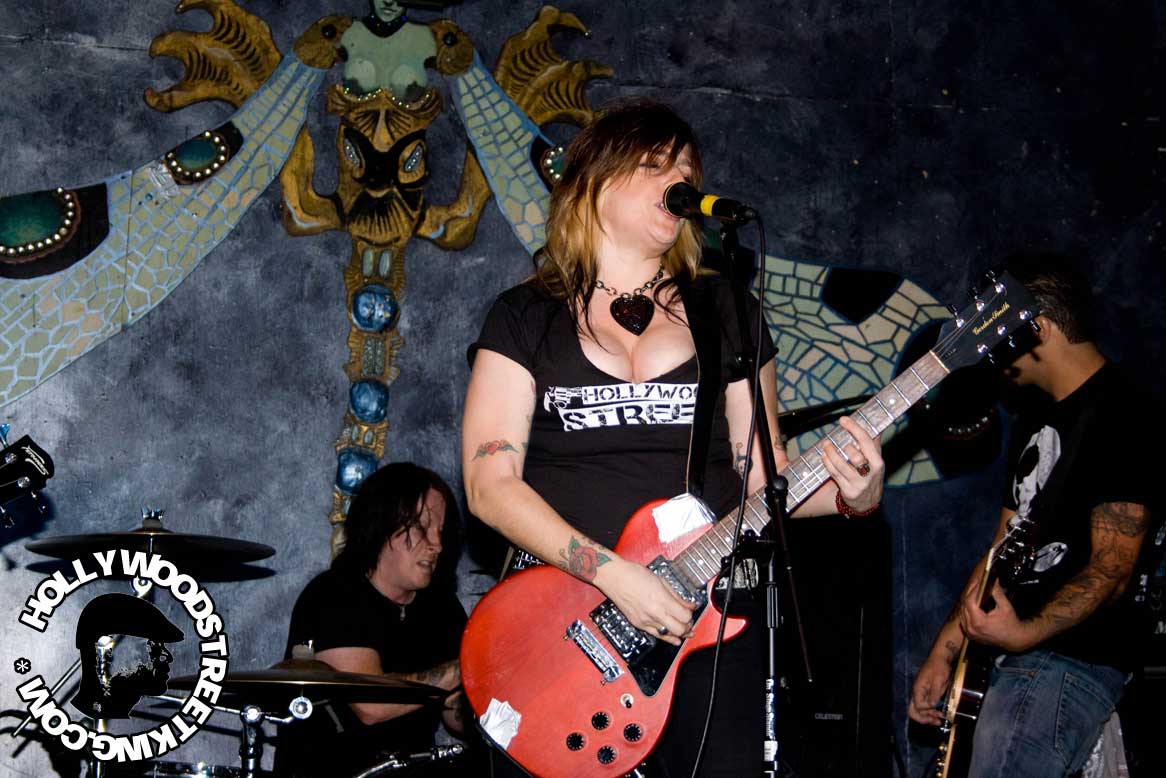 As a musician and as a singer, who are some of your influences and why?

I am in love with music of all genres and time periods and can still learn something by listening to a good song or seeing a great performance. I think one of the top people that blew me away though is Patti Smith.

I heard Patti’s music before but the first time I was in her presence – WOW. It was something I had never seen before. I was at St. John’s the Divine, somewhere in upper Manhattan for a tribute to Allen Ginsberg. She walked in with a purpose. All black, creased jeans, holding a clarinet in one hand and a lined piece of note paper in the other. She was so forceful on the mic. She read something like I’ve never seen anything read, then spit on the floor, crumpled the paper, went into song and then did something on the clarinet before saying a few more words and walking off. If I could have 1/8th of the presence that she did on that day, I’d consider myself a success.

Briefly discuss all of the bands that you are currently in and that you used to be in.

I haven’t been in too many bands. I started playing out somewhere in 2004. The first band that I played out with was my friend Kyle’s band Skeleteen. I played bass and did backup vocals. I am still a big fan. Chase was our drummer and, later, became the drummer of The UVs. I started The UVs in 2005 and, like me, it has gone through many growing pains. The lineup and direction the band is going in is better than it’s ever been. I got a great group of people and a lot of new material that I can’t wait for people to hear.

Mike Christie on lead guitar, Fabrice Ferrer on bass, Chase Manhattan on drums and I play rhythm guitar and sing.

I have also been helping out Betty Blowtorch do a remembrance for Bianca. It’s been 10 years since she’s passed. I’ve been playing bass and singing with the rest of the girls. It was the first time in ten years that they’ve all been in the same room. I love it. It’s a tremendous responsibility for me though, because I want the audience to enjoy it and have a good memory of the show. I want to make Bianca proud. We’re getting ready to do the big show – soon to be announced.

Corey Parks has taught me a lot. She is a very unique and creative person. I interned with her for a couple of years before I graduated to making her creations on my own. Corey is working on a couture line called Stand and Deliver, so anyone that is interested in her Corey Parks Custom line – basically the “punk rock” line – come to me. I enjoy creating and giving people a little “punk love” in the designs.

Discuss Rebel Music TV and your role as co-host on it.

Rebel Music TV is Tony Misfit’s creation. He got together with Ian Down from White Flag Down and wanted to have a go at an internet radio show. Rebel Radio is that show and it is a crazy internet radio phenomena. It has a lot of interest and people all over the world listen to it. We have shock value, sexy girls and substance. Everyone affiliated with the show has a love for rock/punk and all that is underground. I fell into the role of co-host by showing up to every podcast and giving Tony and Ian shit. They decided, since I talk so much, that they might as well give me my very own mic. Well, I share it with Samantha Meow. I don’t give her trouble because she’s like a little sister and I like to hang out at her store, Just Deadly. I also sometimes help keep the interviews on track when the drinks start flowing, since I’m the sober one.

RockShopNRoll is a culmination of all the things I love – community, art, music and shopping! (well, I’m a typical girl in that way, what do you want?)

It’s still in the works, site is 99% done. It is a high-end, Rock-N-Roll inspired accessories boutique with items that I make or one of a kind items that I find, as well as handpicked up and coming designers’ products. It will also have a blog section about shows and fashion. It’s definitely my labor of love!

Discuss your experiences (good and/or bad) being both a female singer/musician and working in the entertainment industry.

Not until I started hanging around the originally all girl band Blare Bitch Project did I get any encouragement to play. Blare N Bitch was the first to support me in having a band.

The good news is that there are some talented musicians that have respected and played with me. I don’t care what you are, just as long as you know how to play and can rock it. I’m very picky with who I play with. I want to be and learn with the best.

I hate to hear things like, “wow, I thought
you were just a groupie, I didn’t know you could actually play.” There’s two things wrong with that statement, the statement itself and then thinking it’s okay to actually say the statement out loud to me. Some guys have apologized for doubting my talent and genius (kidding), including a journalist. The funniest incident was when a security guard told me I couldn’t go through the back door, while I was carrying my gear, because “it’s only for the bands, honey, not for girlfriends.” I had to tell the “sweetie pie” that it’s MY band.

When you’re good, some guys like to claim you. I’ve heard around town different guys telling people that they taught me how to play or gave me my name. That’s total bullshit. I made me – that’s it, end of story.

What’s your advice to young people (particularly girls) who are contemplating becoming musicians and/or working in the entertainment industry in some capacity?

My advice to someone (male or female) starting out in any field is to just do it. Practice what you love. Find like-minded people and learn and grow together. Don’t listen to anybody or anything except for your heart. If you’re looking for advice, find accomplished people in the area you want to succeed in and emulate them.

Feel free to discuss any of your other endeavors that were not already mentioned above.

That’s all my endeavors at the moment. Catch up with me in a few months and I’ll bet that I have something else to talk about!

We’re always looking for shows, promoters, bookers and sponsors – hit us up if you like what The UVs are about.

I would like to mention and thank Raymond J. Flores, Tracie Cochran and Bianca Halstead for helping me become the person that I am today – they are my Lucky Angels. Blare N Bitch because she ROCKS and has always been by my side. And to my band members – Mike Christie, Fabrice Ferrer and Chase Manhattan. I love and learn from them every day.

Thanks for the interest, Andrew!