Formed in Toronto, Ontario, Canada, the hard rock band Harem Scarem did well in their native homeland and also in Japan, but seemed to have somewhat missed the boat in the coveted US market, the curse of Warner Music.  Throughout their career which began as early as 1987 they have unleashed twelve studio albums. (with the most popular probably being Mood Swings).  Founders Pete Lesperance and Harry Hess have remained in the band and the driving force throughout it’s tenure, undergoing a brief name change (they still went under Harem Scarem in Japanthough) in the late 90’s/early 2000’s they finally went on hiatus in 2008 after an impressive 20 years.
Now, perhaps on the surge of great Canadian bands re-forming and recording new material such as Brighton Rock, Coney Hatch and The Killer Dwarfs, Harem Scarem is back and like the aforementioned bands, is playing at The Rockpile Bar & Nightclub in Etobicoke, Ontario.  The Rockpile have done an incredible job of bringing in some bigger name acts to their relatively small venue and have done an awesome job of

creating a local scene here.  The Rockpile is becoming a destination, boasting such names as Faster Pussycat (many times), Helix, Kill Devil Hill, Drum Wars, Jack Russell’s Great White, Stryper, Y&T, L.A. Guns, Dio Disciples, Brighton Rock and many more past and future.  Together with Black Moon Entertainment they presented tonight’s show with Harem Scarem, who took the Rockpile by storm, but not before some great stage setting opening acts. 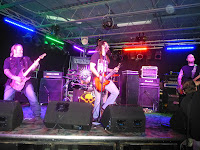 First up was West Memphis Suicide from Cambridge Ontario.  Now I had heard a ton about this band, albeit all from esteemed Decibel Geek colleague Wally “Wallygator” Norton and was excited to see and hear them for my first time.  The only song that I had any previous experience with was their version of KISS’ War Machine that they recorded for the Kissin’ Time tribute CD, Canada’s all indie tribute that saw all proceeds going to Toronto’s Sick Kids Hospital.  These guys are also finalists in the 97.7HTZ FM Rocksearch competition for 2013.  This is the same competition that spawned Rainbow Butt Monkeys (now known as Finger Eleven), The Trews and My Darkest Days, so Wally is not the only one buzzing about West Memphis Suicide and their brand of booze soaked southern metal.  There were several WMS shirts floating around, most sporting their slogan on the back, “D.I.R.T.bag”, which stands for Driven, Integrity, Respect, Trust.  I even caught sight of a couple showing off their Headstones shirts as well.  During their quick little sound check, I immediately caught Wally’s buzz on these guys.  The riffs I heard were awesomely dirty and chunky and I noticed that they rather looked like they could star on the next episode of 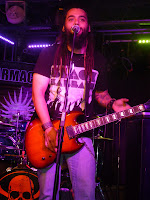 Duck Dynasty.  As they started the actual set the riffage continued along with a heavy beat pulling you into their stage set.  The bassist sported a real determined and angry look, a great rock bass-face while the guitarist, Barry Martin showed off the real rock and roll attitude, slinging his guitar around.  Singer,  Chris Raposo’s throaty, soulful growl fits well with the music and carried the songs through.  As Duck Dynasty, even joking that they resembled a bunch of truckers,  blasted through their set of heavy power rock that sounded a little like CCR mixed with Pantera with the raw, dirty riffs and the Southern swaggering bluesy feel they were on pace to finish early, so they added in a song even.  This rough looking bunch of dirtbags is definitely worth checking out and here’s a link to their song Dyin’ Breed on you-tube.  Check it out and let me know what you think of West Memphis Suicide. 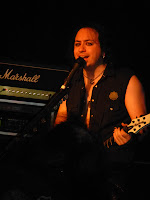 Toronto based band Warmachine took the stage next and ripped through a set of heavy songs.  The singer was quite short and the way he was hunched down over the microphone made him look even shorter, but there was nothing short in his vocals or his guitar playing.  Watching their first few songs, all I could think about was how much the singer’s (Joe Di Taranto) stance and guitar reminded me of German metallers Kreator, who I had just recently seen at Sweden Rock Festival.  Before their fourth cut, Eternally, Joe announced that Harry Hess had sung this one on their album and I found out later, after the show that Darren Smith, drummer for Harem Scarem was formerly in the band.  I’m not sure if he still is as he was not playing with them on this night, but he is listed as the drummer on their official Facebook page and their official website announces that Darren has been named the new lead singer for Jake E. Lee’s Red Dragon Cartel (who I will be sure to check out on The Monsters of Rock Cruise 2014).  A few more thundering tracks took us to what I like to call the “opening bands curse”.  A solo, drums as it were and I’m not 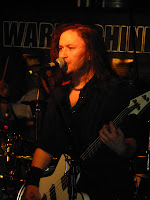 opposed by any means to soloing of any instrument, however I do not think that it has a place in a shortened opening set.  It was very short however and then they were under way again with the ballad With You.  Their final tune was a real treat for a die hard Iron Maiden fan like myself (if all goes well I will be seeing Iron Maiden in Brasil in September) when they ripped through a wicked cover of The Trooper.  Definitely Warmachine is a high energy band and I’ve since visited their stuff via the Facebook page and it’s really good.  Fellow Decibel Geek, Kate had purchased a CD at the show and now I’m wishing that I did as well.  I was a little lacklustre this night and I think it has to do with the fact that I was hanging back at a table rather than rocking the front row as I usually do at a show….the only way to see a concert in my eyes (and ears)! 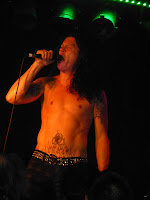 The milling throng assembling down in front of the stage in my usual stomping grounds before Heavens Fire took the stage eluded me to the fact that there was something to this next band although they were unfamiliar to me.  The three of them hit the stage and ripped through their first two cuts, having a real Maiden feel to them or was that just Warmachine’s The Trooper that was still rolling around in my head?  By the third song a fourth member of the group joined the stage to handle vocals.  Apparently the first two songs were prior to his joining the band and as I watched him reading off of an i-pad I realised that he was familiar and none other that aforementioned Darren Smith, skin basher for Harem Scarem and Warmachine!  Maybe that’s why he wasn’t with Warmachine as triple duty might be a bit taxing?  Even though the i-pad reading was taking place, it did not deter from the show 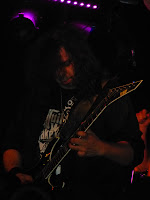 and they were another high energy band of which I was loving the music and decided that I have to purchase merchandise after this one.  They then proceeded to fulfill the curse with a guitar solo from founding member J.T. Harris.  I could hear elements of Motley Crue in the mix as well along with the Iron Maiden feel and then they double cursed with a drum solo!  They closed up with a great cover of the Van Halen classic Panama and Darren threw the microphone out in the crowd for an audience member to croon away for a chorus.  The solos did not stop me from purchasing their Judgement Day CD, which is excellent and produced by Harry Hess as well, but I just wish that opening bands would drop the solos and fit in another song as that’s what wins over more fans in my opinion anyway.  In any case check out the You-Tube link below for their song All For One, they are a great Canadian band.

Darren took his seat now behind the kit as Harem Scarem started up at the late hour of 12:30am opening with Saviours Never Cry from the Mood Swings album.  They sounded perfect and were wickedly tight, it was just like listening to the CD.  For the third song Darren announced that they were gonna go way back before he had pubic hair for this one and they tore through a heavier version of Hard To Love.  Harry spoke to someone down in front of the stage saying that she was crazy for flying all the way from Japan and I’m not sure if that was a joke or not.  I reflected quickly on some of my travels and while I wouldn’t go as far as Japan for a band I do make some awfully long treks to catch a great band….maybe I’m crazy too, I know that there are definitely some who think so anyway.  Darren chastised the crowd for not being more into it as Harry picked up the guitar and Darren took over vocals on Sentimental Blvd.  Christine from London bought a round of shots and sent them up on stage for the guys, I’m not sure if that was London, Ontario or England!  Pete downed his quickly while Harry claimed that if we wanted him to remain upright, he’d better refrain.  I could clearly hear a group of young ladies behind me belting out the chorus to Honestly as Darren succumbed and enjoyed his shot.  The Mood Swings songs were the highlight of the night for me being one of my favourite CD’s and we were treated to a triple shot with Stranger Than Love, Mandy and Had enough before

they left the stage at 1:30am.  Only an hour?  That seems to be way to short to me for a headlining act, but maybe Darren was tired as he’d been on stage for two bands (could have been three if he played with Warmachine) and really I guess with the late start time I don’t think I’d last until 3am or something.  They returned for an encore of two songs comprised of Justice and Higher Ground to wrap it all up at 1:45am.  Harem Scarem were amazing and super tight and cle
ar just like playing the CD and they really seemed to be enjoying being up on stage now that they have re-formed, I just would have liked an earlier start and a longer set.  After some dates in Japan they are booked for a return headlining gig at England’s Firefest Festival in October which has also seen the likes of Brighton Rock, Coney Hatch and Honeymoon Suite.  Darren sure is a busy guy with all his bands and I look forward to seeing him again on the Monsters of Rock Cruise as he sings with Jake E. Lee’s Red Dragon Cartel.  Let’s hope that Harem Scarem are also in the new music game as I’d love to hear some new stuff from the boys, but until then I guess it’s Mood Swings on a constant repetition on my MP3 player! 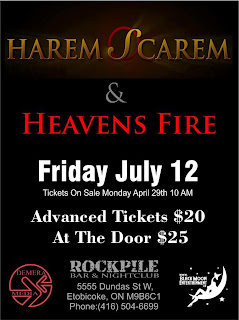