Sometimes you find yourself, almost subconsciously, returning to an album over and over again. I call that a sleeper. You spin it the first time, knowing nothing prior to that. It finds its way onto your phone for mobile listening and is seen to while away bus travel hours more often than expected. Then a week or two later at home scrolling through some recent releases and additions to your digital library, you again settle on that album. And here I am with MURDERBIRD – Pillars of Creation.

Some Facebook investigations (thanks for having an updated page) provides some background into MURDERBIRD. According to that, MURDERBIRD formed in 2014 and are based in Stockholm, Sweden. Of course, they’re Swedish! So much great musical output from the Scandinavians these days. Realizing membership of Tobias Ekholm (vocals), Stefan Haglund (bass), Markus Söderqvist (guitar), Patrik Forsberg (guitar), Marcus Hamrin (drums) and independently issued this debut album on June 28, 2019.

I’m, personally not usually one for the “modern” sound in my preferred rock and metal music selections. While that element runs strongly through Pillars of Creation, there’s much more lurking in the mix. Thrash elements, Hard Rock and perhaps I even detect a little NWOBHM if you scratch the surface deep enough. At a quick glance, it almost seems that the songs get longer as the album goes on. That’s not exactly true, but the early tracks hit in the 4-minute mark whereas the later reach 7 or above. At over an hour runtime, it’s quite a lengthy listen. 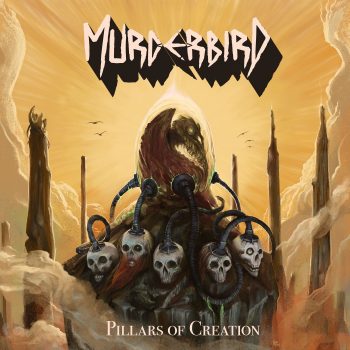 The album thunders off with “Into Fire” featuring a solid headbanging groove and some tasty guitar work. Check out the video below for an introduction to MURDERBIRD. From there we dive into a track called “Life Begins”. A real grinder of a riff starts off, before tapering back for a more melodic piece. “Mr. & Mrs. Predjudice” features more grinding guitar riffs to drive the song along with some venomous vocal deliveries here. Definitely a very modern feel to this one, but it’s possibly my fave on the album. “Silver Lining of Yesteryear” and “Lift Me Up” both feature a sing-along catchiness.

By the time we hit track #6, “Shining Star” the compositions leave the 4-minute range spanning 5 minutes and into the high sixes. The length of the compositions contributes to my waning interest by the time we are into the back quarter of Pillars Of Creation. Everything seems to blend together for me during this later stage. Perhaps I just have a short attention span. But, that said, overall MURDERBIRD – Pillars of Creation is a decent release, quite a satisfying listen and one that I keep returning to.