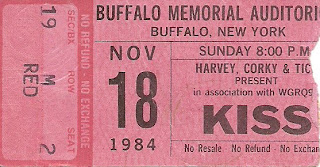 As a writer for the Decibel Geek Podcast, it should come as no surprise that I too am a Kiss freak through and through. So I thought it is time enough to share a Kiss memory with the Decibel Geeks.

Rewind to 1984. I was 14 years old and by this time I was already a concert veteran, having already seen Motley Crue/Accept and Ratt/Santers. Both of those shows were in Toronto, about an hour from where I lived. Those were just a bus ride away.

By this point in my life KISS were “it”, there was no other band on the planet that got me going more than KISS (with possibly the exception of Crue). They had just announced the first leg of the North American Animalize tour and   Toronto was nowhere to be found. I was beside myself. My ultimate rock heroes were touring and I wasn’t going to get to see them. This was a complete disaster, and I had to figure something out.

Buffalo, NY was on the list and Buffalo was also about an hour from where I lived. Problem was, there was no way my Father was going to let me and my 15 year old crew head off to another country to see KISS. I decided, however, to test the waters with my Dad just in case I was wrong or could somehow make him see that I might possibly die if I didn’t see Kiss. C’mon 14 year olds can be a little dramatic.

At dinner I informed my Dad of the horrible news. That Kiss wasn’t coming to Toronto this tour! I then pointed out the Buffalo show, and that if I could somehow be allowed to go to this show then I would never ask for anything ever again. Once again, 14 year olds can sometimes be a little over the top.

To my surprise, my Dad didn’t say no even though “no” was usually a favourite word of his. He said he would give it some thought.” Holy Crap” I thought, I was maybe, possibly going to see KISS!

The next day he came home from work and told me that he was willing to take us to the show, in fact he had invited his friend and would be actually going to the concert with us. How cool was my Dad?

Next obstacle was trying to get tickets. Remember this is 1984, pre-internet, pre-home computer (god does that make me feel old!) and we are trying to buy tickets for a concert in a different country. Luckily I found a “ticket” company that specialized in Bus tours.

When we went down to buy the tickets I was informed that they ONLY sold the tickets as a “bus tour” package (and at three times the ticket price). Once again I could feel the Kiss experience slipping through my fingers. My Dad tried to explain the situation to the girl at the store, but to no avail and we went home empty handed.

Without my knowledge, my Dad called the guy who owned the “ticket” company and explained that his 14 year old son “just might die” if he can’t go to this concert. Low and behold, this guy made an exception and my Dad told me to jump in the car we had to go downtown to pick up our KISS tickets. Visions of pyro flames, smoke bombs, the Kiss lighted logo, and Gene, Paul, Eric and Mark St. John in the same building!

When we got there to pick up the tickets this tall, long haired rocker guy hands us this “voucher” not the actual tickets?? This didn’t sit well with my Dad, he was thinking this guy was scamming us but the guy claimed we were to take the voucher to the box office and we would receive our tickets. So here I had to fork over my friends’ hard earned cash and I didn’t even have actual tickets to give them. It was a leap of faith but c’mon this was KISS!

Counting down the days before the show was agonizing but finally Sunday November 18th, 1984 finally arrived and 2 carloads of kids plus my Dad and his friend were off to Buffalo New York. When we arrived, the ticket scam turned out to be legit as my Dad emerged from the box office window with all of our tickets.

Queensryche opened the show. They were good although my Dad informed me they were “crap” and in fact for weeks after he would often let out a long, horrible, falsetto scream saying he was just singing some Queensryche for me.

When the lights went out, the crowd roared as my heroes were elevated up from behind the drums. So Cool! Just the fact that I was in the same building as KISS gave me goosebumps as they tore through a blistering set. 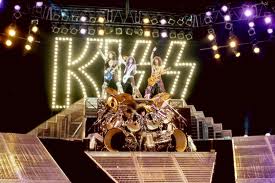 We were on our feet, cheering, air guitaring and singing along with every word. The concert was spectacular and I still consider the Animalize to be one of the best NON-Makeup tours with regards to set list, stage show and 4 guys out to prove they could deliver without the makeup. Cold Gin, Fits Like a Glove, Eric singing Young and Wasted, I Love it Loud, Thrills in the Night, it was a total blur of song after song.

We cheered for Paul and Gene and Eric and Mark. We were even yelling out Mark’s name until halfway through the show when Paul introduced us to Bruce Kulick!?! We were so confused, my concert program had Mark St. John? No worries, this Bruce guy was amazing. 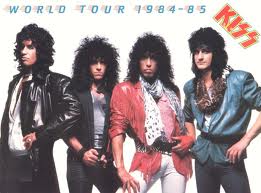 My Dad just smiled and spent a good portion of the show checking out the girls with my binoculars. That was until someone tossed a record onto the stage. Paul Stanley picked it up and asked the audience if they would prefer Kiss stop playing and put on this “Green Jelly” record. To my horror, my Dad jumped out of his seat screaming YEAH GREEN JELLY GREEN JELLY!

Paul actually smiled and motioned to my Dad with nod before he told Green Jelly to keep their F’n records off the stage and kicking into another KISS classic. My Dad had interacted with Paul Stanley! So Cool!

The big finale of the show had Paul, Gene and Bruce running up a ramp way up into the lighting truss. Then stepping onto a platform that slowly lowered them back to the stage. With plenty of lights and smoke and pyro! This was the coolest thing I had ever seen! We wanted the Best and that night in Buffalo we got the Best. 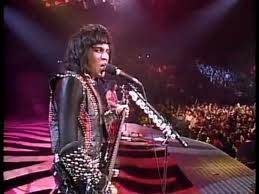 That was my “First Kiss” although it would not me my last. I look back on that now and I am so glad that I got to share my favourite band with my Dad. He would often admit that although Kiss’s music really wasn’t his thing, they did put on quite a show. Rest in peace Dad, I miss you so much and thanks for taking me to the show.