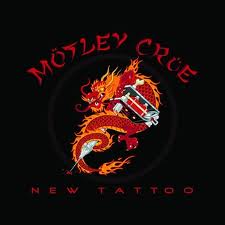 This week on the Decibel Geek podcast, Chris and Aaron wrapped up the year 2000 Year in Review show with some interesting song selections including “Fake“ off Motley Crue`s New Tattoo album. Now those that know me, know that the Crue are right up there with Kiss as my one-two punch for my all time favourite bands. I am a complete and loyal Cruehead.

Now New Tattoo was a strange time for the Crue. To rewind a bit they went from the highest of the highs charting the number one Dr. Feelgood album. Followed that with two commercially disastrous albums, the Vince out-Corabi in self titled Motley Crue album (an absolute masterpiece, if you ask me) and the Vince back in but incredibly strange Generation Swine album.

By the year 2000 they had acrimoniously parted ways with Elektra records and had regained ownership of their back catalogue. Nikki was large and in charge and ready to cash in on some serious profits as they re-released their previous albums on the new “Motley Records“ label.

A new album, without drummer Tommy Lee was released and in my opinion became the “lost“ Crue album. People still talk up the self titled Motley Crue album in order to either justify or rip apart the Crue without Vince and they also talk up the “grungy“ songwriting found on Generation Swine. I rarely ever hear anyone discussing the New Tattoo album unless it`s to complain that Tommy Lee isn`t there and I certainly agree that Tommy is integral to the sound of Motley BUT… 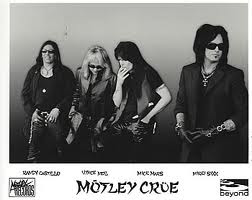 New Tattoo is actually a decent Motley album. Not exactly in the league of Dr. Feelgood or Shout at the Devil, but certainly every bit as strong as Theatre of Pain or Girls, Girls, Girls. The album marked a return to the traditional Crue themes of chicks, beers, chicks, rock n roll, chicks and drugs. Vince seemed much more comfortable on this album and although Tommy was sorely missed, I was just happy to have Motley sounding like Motley! The guitar tone on Tattoo was really lush and some of Mick`s coolest riffs.

Fake, 1st Band on the Moon, Treat Me Like the Dog I Am, Punched in the Teeth by Love, Hell in High Heels and a killer cover of the Tubes` White Punks on Dope! The songs are gritty, sleazy, snotty and most of all FUN! This seemed to be the critical piece missing from the last couple of Crue albums.

As for the tour that followed, I was quite tight for cash when they announced the Toronto show. So I had pretty much decided I would not be attending when Motley and Megadeth rolled into town that year. That changed one afternoon while out shopping with my wife. I stopped by the Ticketmaster booth just to see how the show was selling and inquired about 2 tickets. I was thinking that maybe some cheap nosebleeds might be better than not going at all. Then for some reason I inquired about a single ticket and my adrenaline kicked in when she said there was a single ticket in row 2! Row 2!! I had never been that close to my rock heroes and suddenly being tight on cash was no longer as important. I was THERE! 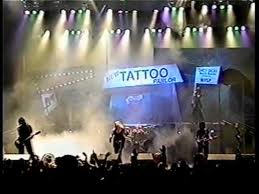 Heading off to see Motley Crue and Megadeth from the second row had me pretty pumped. Tommy or no Tommy this was going to be cool. Now I am not sure what was going on the night Mr. Czynszak caught this tour because there was no such sound problems that night in Toronto. Megadeth were great, the Crue were even better and I came home exhausted and content. My heavy metal fix satisfied for a while.

New Tattoo may not be the strongest Motley album, but in the year 2000 it sure felt like they were back on track doing what they do best. Full throttle cock rock with attitude. Crue! Crue! Crue!