"No Bullshit Rock and Roll" an Interview with WEST MEMPHIS SUICIDE 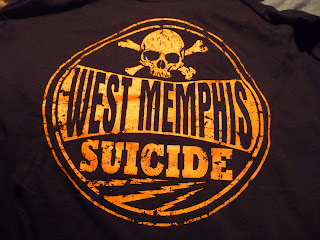 I will go under the assumption here that most of you reading this have probably never heard of West Memphis Suicide. That last sentence, in my opinion is a complete and utter miscarriage of justice. If I can share just one piece of musical advice to my readers out there, please stop what you are doing and immediately head over to Itunes or wherever you can  and pick up their album `Resurrecting the Ghost`. This album is a whiskey soaked journey into some raw, in your face metal that will shake the fillings out of your teeth and rock you to the core. This album should be platinum and hanging in a frame on a lucky record company’s wall, just sayin!
“Resurrecting the Ghost” is truly a metal masterpiece, heavy as hell yet oozing in melody and musicality and thats what I love about it. If I had to make a comparison, this album reminds me of Skid Row’s “Slave to the Grind”, all killer no filler and even the ballad’s kick ass. 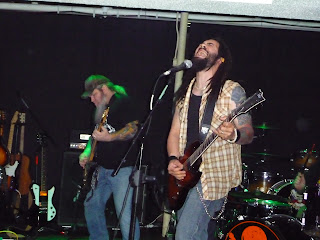 With a name like West Memphis Suicide you`ll probably be surprised to hear they hail from the town of Cambridge, Ontario up in Canada and they have been rocking up North for a few years now. I was turned onto this band from a friend of mine who invited me out to one of their shows last year. That night I witnessed a band tear up a stage so thoroughly and convincingly that I walked right over the merchandise table to buy the disc.
The band is comprised of Chris Raposo (vocals, guitar), Barry Martin (guitar), Paul Oliver (bass) and Chris Spiers (Drums) and last night we assembled in an alley behind the rock club that would host this evening`s performance.
WN        Ok guys who the hell is West Memphis Suicide? 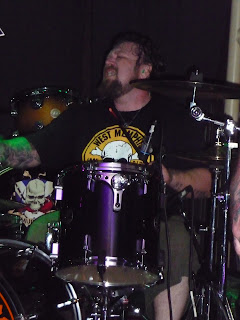 Paul       WE’RE THE CANADIAN FRESH MEAT! (laughter)
Barry     We are just another Rock Band trying do its thing.
Raposo We are just four regular guys man and hopefully that comes across when we play you know? A lot of guys get up there and they swoop their hair to the side and they have whatever gimmick going. They go on and they try to be rock stars. We just get up there and play a fuckin hard assed show and hopefully that comes across and I think it has so far for us. More and more people start coming out to the shows, more people starting to talk about us, the industry is starting to talk about it and we’re doing all on our own steam, I think that’s what we’re all about, No Bullshit Rock n Roll.
WN        Well, I was turned on to your Resurrecting the Ghost CD and I have to say it is one of my favourite Cd’s period. The songs and the production of that CD is as good as anything out there. Tell me where that all went down? 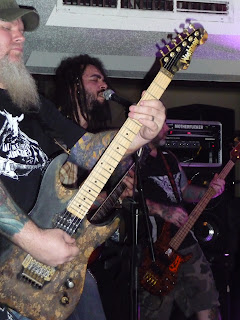 Raposo Sweet! Thank you very much. Well we did spend probably close to 5 million dollars to record that album.
Paul       Yeah less  $4 999 000 (laughing away).
Raposo The funny thing is that when people listen to it they expect it was recorded in a major studio but what we did was we recruited a buddy of ours who had produced his own band and did an amazing job of it. We’re all involved in finding common minded people and getting them involved. Kind of like a family affair you know and his name is Dave Houde! The Sound Distillery is the studio, the music was actually recorded in Paul’s Tattoo Shop (Lucky Souls Tattoo) downstairs in the bunker where we wrote all the songs and rehearse.
Chris      It was recorded on a laptop.
Raposo Yeah it was all done on Macbook and I think it turned out… I am proud of that motherfucker you know.
Paul       Mastered at Sterling Sound.
WN        I have heard a story regarding a Guitar Competition and a certain member of the band.
Raposo Oh
Shit (laughing) BARRY MARTIN!
Barry     YES I Won Everything! No it was Chris (Raposo) that entered the Shredder Search for Dean Guitars being a fan of one Dimebag Daryl and out of 1102 people on  the planet earth he came in the top 15 (note this contest was judged by Vinnie Paul of Pantera) which was pretty bad ass! So if anything people should be checking out the guitar work of this band, especially MINE (laughter) 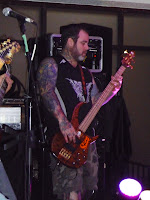 WN        So what is on the burner right now? Anything new in the works?
Raposo We have started tracking some new songs with Dave (Houde) again in Kitchener and I think they are starting to sound really good. We have Hockeyfest and a couple of bigger shows coming up but I am hoping the plan is to hunker down and put em all together, record em and put out a kick ass new record with our new Drummer CHRIS SPIERS!
Chris      YEP!
WN        Your t-shirts are adorned with the term DIRTBAG, I think it’s a pretty cool way to identify with your fans. Can you tell us about that?
Raposo It’s a story from when I was a little kid, I always had hand me downs from my cousins and was always the fat, portly kid that got beat up. In one instance I got kicked over a fence and my pants ripped down, I was always that kid that got picked on they called me a “dirtbag”. As I got older and got more confidence I thought I am going to turn this around and make it something that unifies people. So what I did was take the whole idea and broke it down so what it is, is this  Driven by Integrity, Respect and Trust and anybody I involve myself with and the band involves themselves with we feel lives up to this, you could almost call it a bikers code. People are grabbing onto that, finding themselves in that motto.
Paul       It’s like a badge of honour really and it’s cool for us because it’s a compliment to us and what we do.
WN        Now I know you recently got to play with John Corabi who, in my opinion fronted the best Motley Crue album. What was that like?
Barry     yeah same here I go on record as saying that, great album
Raposo I think he was great, Barry here is our schmoozer so he got to spend some time with him and got to hear some stories, didn’t you?
Barry     Yeah man, but no stories you’ll have to meet him yourself (laughter) No he was really cool there was no “rockstar” attitude. He was just a regular guy, playing the scene. Really cool singer, songwriter to play with him was great but to meet him and talk with him? I wasn’t hearing Motley Crue stories from some guy I was hearing Motley Crue from a guy that lived them. I was a little star struck yet having a beer with him he brought it down and it was cool.
WN        Ok, last question for you guys and I will ask individually. Pick me the song “you wish you wrote”
Raposo Oh that’s a tough motherfucker that one. I am gonna go hands down “Walk” by Pantera. Well anything by Pantera (laughs) that’s my pick
Barry     Anything by Lady GaGa ohh man there’s a lotta shit, I got so many Ok Fuckin Purple Rain by Prince there you go, I mean give me a break you know “Supposed to be a Heavy Metal Guy!” Purple Rain, anything from Skynard you know real shit. I can’t pick just one.
Chris      (points to Raposo) Anything that this guy here wrote (laughter)
Paul       I don’t know there’s just so many ahhhh,  “Broken” by Pantera 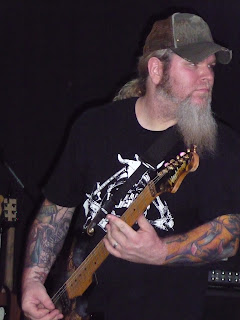 Raposo But you should see these guys collections, man I got through their DVD’s you got Annihalator, Metallica, Pantera, Dixie Chicks, Adele I mean what the fuck? It’s insane.
Barry  Hey I’ll tell you what that girl in the Dixie Chicks can sing and she can&nbs
p;jerk tears out of your eyes man. I mean look, music is the soundtrack of your life, you know what I mean so why would you pigeon hole yourself to I AM JUST A HEAVY METAL GUY!  Because then you are JUST a heavy metal guy
Raposo Well that goes back to what I said at the beginning you have the guys that get up there thinking they have to be all “RRRRRRROOOOAAARRRR”  all the time man. I mean you’ll know if you’ve seen us when we get up there we are having a blast, when its time to be serious we’re serious but even then we’ll joke around, it’s who we are.
Barry     You can be aggressive and have fun, I am having a blast when I am playing with these guys so why should I be miserable? I am miserable enough in my day to day living when I am waiting to go play with these guys again. 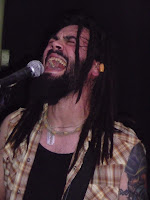 The boys in the band then headed inside the club to grab their guitars and hit the stage.  Kicking it off with the opening riffs of “Sixx Feet” , WMS launched headfirst into a kick ass hour long sweat soaked set. These guys work the stage and as mentioned in the interview, they truly seem to enjoy being onstage, goofing around and having fun playing together. Chris Spiers and Paul lay down groove so deep you could fall into it, while the tandem guitar work from Barry and Raposo is truly something to see.
Delta Bruise was a show highlight with its tasty bluesy feel. They ended the set with “Nothang Messiah” as the audience chanted along “ALL HAIL!” in metal unison. These guys mean business and they have all the ingredients, strong musicians, great songs and a kiler attitude. In Raposo’s own words “No Bullshit Rock and Roll”!