Now Hear This: All Things Must Pass 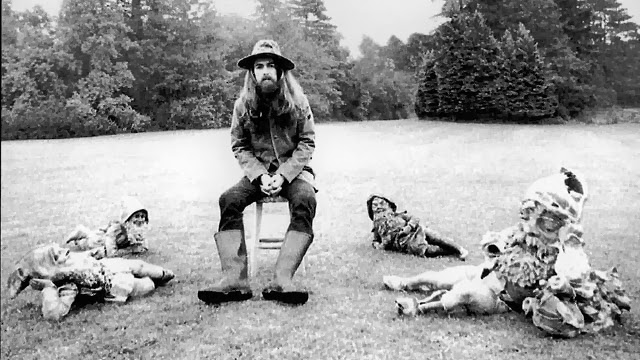 I know, poor George Harrison, right? Oh, it must have been so hard, being the guitar player in the most popular and successful rock band in history. The world’s smallest violin gently weeps. But try to imagine how George Harrison, who developed into quite a talented songwriter in his own right, felt to find himself, understandably, entirely overshadowed by two insanely gifted and prolific geniuses named John Lennon and Paul McCartney. How triumphant then that arguably the two very best songs on the last album that The Beatles recorded together, Abbey Road, were written and sung by George. “Something” and “Here Comes The Sun” are timeless classics and set the stage for Mr. Harrison’s first real solo album (let’s ignore its self-indulgent predecessors), a triple album called All Things Must Pass (it’s really just a double album since the third LP contains a mostly improvised jam session–okay, this one’s a tad self-indulgent as well).
John Ono Lennon had announced he was leaving The Beatles a week before Abbey Road was released in September of 1969 (that album would go on sell four million copies in the first three months). George Harrison’s song “Something” was released as the album’s second single and went to number one in both the US and the UK. 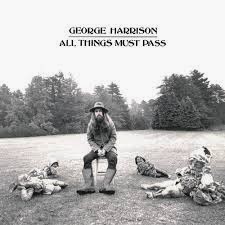 Harrison began recording All Things Must Pass with Phil Spector at Abbey Road Studios in May of 1970, mixing was completed in October and the album was released at the end of November. Several of the songs on the album had been rejected by The Beatles when the band were recording the aborted Get Back album, which was eventually released posthumously as Let It Be right around the time George began recording All Things Must Pass. Upon its release All Things Must Pass would sit at number one on the Billboard charts for the first seven weeks of 1971. The album spent longer at number one than either Let It Be or Paul’s first solo album McCartney had the previous year.
All Things Must Pass opens with a mellow tune George co-wrote with Bob Dylan called “I’d Have You Anytime.” It’s a nice song but far from the best on the album and perhaps an odd choice to place at the beginning of the record. Up next is the first single, “My Sweet Lord.” Harrison had originally given the song to Billy Preston, who included it on his second album for Apple Records, Encouraging Words.
George Harrison’s version of the song became a number one hit but soon after Harrison was sued by music publisher Brightunes, who owned the rights to a song called “He’s So Fine” which was written by then deceased songwriter Ronnie Mack and a hit in 1963 for a girl group called The Chiffons. Harrison and The Beatles were certainly familiar with the song and Brightunes won the lawsuit and pocketed more than 1.5 million in royalties.
The third song on the album is a fun tune called “Wah Wah” but the “fun” atmosphere is misleading since Harrison composed the song about the demise of The Beatles as the band was imploding. Phil Spector’s wall of sound is in full effect on the song, there’s a lot going on and it’s a tad bit overwhelming but like I said, fun.
Harrison actually wrote the final song on side one, “Isn’t It a Pity,” in 1966 but it was rejected for inclusion on several Beatles LPs. It’s a great song and would have worked well on The White Album or Abbey Road, perhaps not quite as much of a dirge but in the context of The Beatles maybe a sorrowful ballad?
Side Two opens with a masterpiece of songwriting and in my opinion the best solo song by any Beatles member, an avalanche of power pop called “What Is Life.” The song was a top ten hit in the US but still, that’s not enough. It should be a standard, a song that everyone knows. The song certainly transcends the more famous “My Sweet Lord.” It’s a brilliant tune, absolutely infectious.

After a nice cover of a Bob Dylan song called “If Not For You” that Dylan had only released his own version of a few months prior side two closes with three excellent ballads, “Behind That Locked Door,” “Let It Down,” and “Run of the Mill,” my favorite of which, “Run of the Mill,” is a touching lament about the demise of The Beatles.
Side three opens with another ballad called “Beware of Darkness,” it’s nicely recorded but personally I prefer all three of the preceding songs that closed side two. Up next is perhaps my second favorite song on the record, an upbeat ditty called “Apple Scruffs” that Harrison wrote in tribute to The Beatles’ die hard fans.
“Apple Scruffs” is followed by a great song called “The Ballad of Frankie Crisp,” Frankie Crisp being a previous owner of the Victorian mansion Harrison purchased in early 1970. The song is a sort of ode to the house and its history. Up next is a Phil Spector wall of sound called “Awaiting On You All,” a really good song that gets a bit buried within Spector’s effects. It’s another spiritual song from Harrison with an obvious gospel influence.
Side three closes with the title track, “All Things Must Pass,” a song that was attempted by The Beatles but rejected for inclusion on the album that became Let It Be. Inspired by The Band’s Music From Big Pink and a poem by Timothy Leary called “All Things Pass,” Harrison set out to write a cinematic song that might play over the opening of a Hollywood western. While it’s a nice song it’s not one of my favorites on the record.
Side four opens rather tepidly with my least favorite song on the album “I Dig Love” but it is followed by one of the best songs on the album, a very cool rocker about reincarnation called “Art of Dying.” Eric Clapton and the rest of the guys that would go on to form Derek and the Dominos (Bobby Whitlock, Carl Radle, and Jim Gordon) play on the track.
The album closes with an alternate version of “Isn’t It a Pity,” a song that appeared on side one, and then a great ballad called “Hear Me Lord,” one of the strongest songs on a strong album and another song that Harrison presented to The Beatles only to have it passed over. It’s a spectacular album closer, heartfelt and quite effective.
Of course the album technically is not over, there is a third LP, but for our purposes here, let’s pretend it’s a double album, a great double album, one of the best.