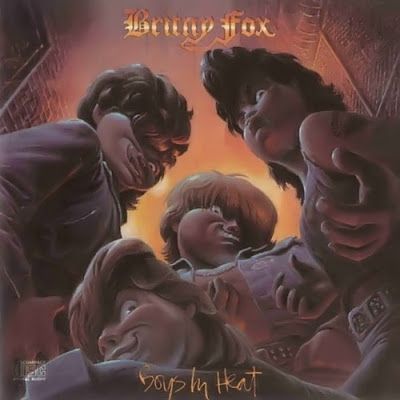 The first, self-titled Britny Fox album, released in June of 1988, was not a great album. I enjoyed it at the time, especially those first two singles, “Long Way To Love” and “Girlschool,” but in retrospect it’s a bland record filled with simplistic songs that, for the most part, fall flat. 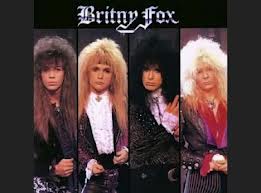 I am sure that I bought Boys In Heat the day it came out, probably already familiar with every song title thanks to a Metal Edge magazine “In The Studio” exclusive. I took the cassette home and, well…I definitely didn’t crank it up, with my Dad in the next room, but I might have plugged in the headphones and thereby facilitated maximum volume. Who knows what I was expecting. 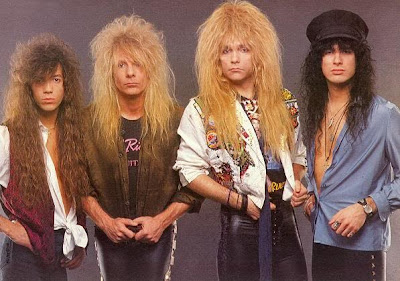 The album opens with a straight ahead rocker called “In Motion,” better than decent. The second song was the first single, “Standing In The Shadows,” simply decent, not great but better than the majority of the songs on the first record. A completely pointless and unfortunate cover of “Hair of the Dog” by Nazareth comes next, Terrible!
But wait a minute, there are four songs left on side one and…I love them all.
First up is a ragged rocker called “Livin’ On A Dream,” headbangin’ riffs and all.
Next up is another riff heavy blast of attitude called “She’s So Lonely.” Hot damn.
Song number six on side one is an awesome acoustic tune called “Dream On.” This is not a power ballad, it’s a great, mostly acoustic rock song. I suppose it filled the “potential hit ballad” slot on the record but it’s a very well-written song and definitely transcends most of the formulaic ballads MTV was pushing heavily at the time. “Dream On” is an example of stellar songwriting in my opinion.
Side one closes with a simple but highly effective pop rock song called “Long Way From Home.”
Side Two opens with a generic hard rocker called “Plenty of Love,” not terrible but unimpressive. The next two songs, “Stevie” and “Shine On,” are in a similar vein, I like “Stevie” a lot but “Shine On” is probably the worst song on the album. The last three songs are all keepers. “Angel In My Heart” is very poppy, similar to “Long Way From Home” but not quite as good.
Ditto for “Left Me Stray,” another fun pop tune.
The last song on the album, “Long Road,” is an excellent ballad, very well done, neither forced nor contrived but heartfelt and on target.
Boys In Heat was a creative triumph but it failed to shift the desired number of units. Nevertheless the band’s career still seemed to have quite a bit of potential at this point, thus it was sudden and shocking when singer and chief songwriter “Dizzy” Dean Davidson quit the band and with startling speed formed a new band called Blackeyed Susan and released a really strong album called Electric Rattlebone. If Boys In Heat was Davidson’s Long Cold Winter then Electric Rattlebone was his Heartbreak Station, a creative celebration of seventies rock. “Satisfaction” and “Sympathy” were as good, maybe better than anything by Britny Fox.
Britny Fox replaced Davidson with a singer named Tommy Paris and made a noble effort with Bite Down Hard, it’s not a terrible album but Britny Fox was Davidson’s baby and lacking his talents the band clearly struggled. Of course none of it mattered when grunge hit. The end.