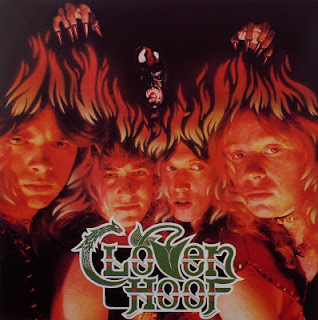 Cloven Hoof formed in Wolverhampton, West Midlands, England (I have no idea what that means) in 1979, just in time for the NWOBHM explosion. Like many of their heavy metal contemporaries their goal was to shock and/or titillate and they employed dark, often satanic imagery to accomplish this, in fact the band name was apparently inspired by the Church of Satan’s newsletter, which was called The Cloven Hoof. At some point band members Kevin Poutney, Lee Payne, Steve Rounds, and David Potter started calling themselves Earth, Air, Fire and Water respectively. The band’s image was over the top. They experimented with outrageous costumes, intricate make-up and thematic masks and I’m guessing that their live shows were a real spectacle, unfortunately Youtube is devoid of evidence.
How awesome is that picture? But what about the music? Check out this early demo:
Great stuff. In 1982 they released a four song EP called The Opening Ritual, which included the heavy metal bludgeoner “Stormchild.”.
The band garnered a great deal of hype and was even championed in the press early on by the likes of Robert Plant and Rob Halford but it wasn’t until 1984 that they finally signed with the legendary metal label Neat Records and unleashed their self-titled full length debut. In my opinion the first Cloven Hoof record is a true lost classic of the heavy metal genre. The production values on the album are not great but the songs are. With the first song on the album Cloven Hoof became a member of the awesome club of metal bands (Iron Maiden, Angel Witch, Metal Church, etc) that accomplished the trifecta, releasing a self-titled album that contained a self-titled song, i.e. band, album, song = Cloven Hoof. Not the best song on the record but a cool way to begin the journey.
The second song, “Nightstalker,” is a headbanger’s delight, full speed ahead.
“Society brands me a homicidal madman,
but they cannot cage what they cannot see.”
Following an instrumental interlude similar to Maiden’s “The Ides of March” the band lets loose with an ambitious epic called “Gates of Gehe
nna,” the only song from The Opening Ritual EP that was redone for the LP. When you listen to the song try to imagine it with a veteran heavy metal producer, someone like Martin Birch, at the helm.
Next up is “Crack the Whip,” which sounds to me like the band were trying to write a more commercial song. They strove for AC/DC and ended up sounding like Krokus. Hey, that’s what Krokus did!
The worst song on the record is followed by the best song on the record, “Laying Down the Law,” which is, in my opinion, a perfectly constructed heavy metal song. Awesome intro, driving riff, brutal chorus. It doesn’t get much better.


“No back alley hoodlum is gonna muscle in on my territory.”
The last song on the album is an ambitious nine minute epic called “Return of the Passover.” The song doesn’t really have a pay-off but I admire the effort.

All in all a damn fine record but what I really love about the album is what the band was trying to do. You can tell they had lofty aspirations and they partially succeeded and with tighter production who knows? The songwriting is ambitious and strong. The CD reissue contains a bonus track called “Road of Eagles” that the band recorded for the BBC at the time.

Imagine this band in the studio with a taskmaster producer who could have tweaked the songwriting, cajoled tighter performances (especially the vocals), and made the damn record sound right, then replace “Crack the Whip” with “Road of Eagles,” and you’d have a monster of a record. A series of line-up changes ensued and the band eventually put out a couple of less NWOBHM, more power metal records (A Sultan’s Ransom, Dominator) but Lee Payne (aka Air) was the only original member left and the magic moment had passed. There are good songs on the later records…

…but they coulda been contenders.