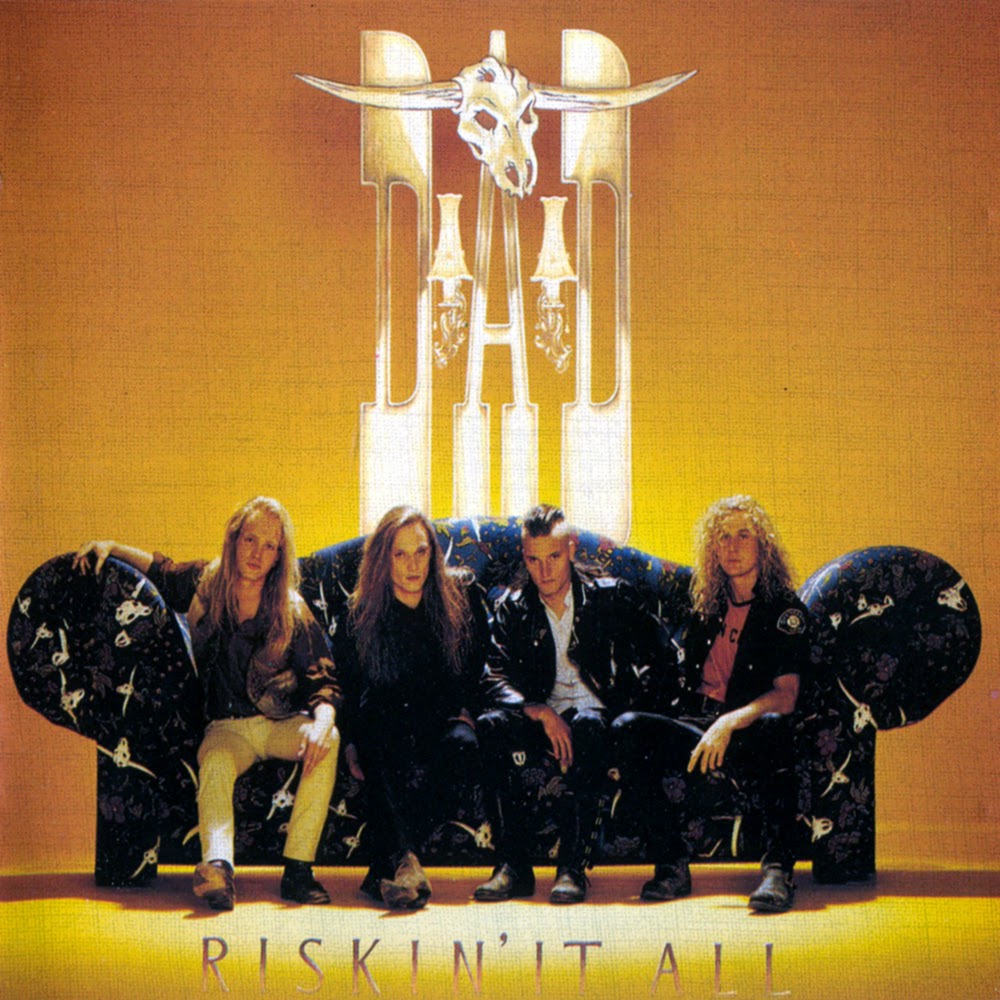 Disneyland After Dark formed in Copenhagen, Denmark in 1982. They were originally basically a cowpunk band, a rock band but heavily influenced by American country music, or rather the soundtracks to Hollywood westerns. After a threatened lawsuit from the Disney conglomerate the band decided to switch to an acronym for a name, D-A-D. I might have suggested a name change but I suppose they were being stubborn. I have to think that the strange name might have hindered their success because they were quite close to breaking in the states at one point, but what teenager wants to buy a record put out by his/her DAD? The band’s first two albums, Call of the Wild and Draws a Circle were only released in Denmark and barely resemble heavy metal at all, incorporating much more of an Ennio Morricone influence. They moved closer to hard rock/heavy metal in time for their third album and first international release, 1989’s No Fuel Left For The Pilgrims. The album’s opening number and almost hit single, “Sleeping My Day Away,” got a lot of airplay on MTV and retains the Morricone vibe in the killer guitar tone exhibited on the song’s lead breaks.
The album was a big hit in Denmark and almost a hit in the U.S. but not quite. Was it the name? Who knows. MTV played the shit out of the band’s “Girl Nation” video as well, to no avail. Unfortunately it took the band more than two years to release a follow-up album, entitled Riskin’ It All, and it would be their last album released in the U.S. As good as No Fuel Left For The Pilgrims was I would argue that Riskin’ It All is possibly even better.The album opens strong with a fast-paced AC/DCish rocker called “Bad Craziness.” Awesome song!
“You won’t believe what I believe when I’m alone.”
Next up is the band’s ominous ode to itself, a very cool song called “D Law,” or Disneyland Law.
And now we’ve arrived at my favorite song on the album and perhaps my favorite tune from the band’s entire storied career, a groove-driven rocker mildly reminiscent of “Sleeping My Day Away” called “Day of Wrong Moves.” I love the vibe and attitude of the song and the chorus is killer.
Another upbeat virtual AC/DC tribute called “Rock n’ Rock Radar” comes next. This is a really fun tune and continues the album’s winning streak.
At this point the album stalls a bit with the boring “Down That Dusty 3rd World Road” and another AC/DC rehash called “Makin’ Fun of Money” but the record kicks into high gear again with a really cool song called “Grow Or Pay” that would have fit nicely on No Fuel Left For The Pilgrims. I keep bringing up AC/DC but when you get to a song like “Grow Or Pay” you realize that this band is capable of a very individual and unique sound, they can create quite the atmosphere and on a song like this the band has a style all its own.
Yet another AC/DC tribute with a great bridge called “Smart Boy Can’t Tell Ya” is followed by the aggressive title track, which is the heaviest song on the record.
The album closes with a very effective acoustic number called “Laugh n’ a 1/2.” Not your typical early nineties rock ballad the song reminds me quite a bit of the kind of song Dogs D’Amour were known for, brooding and dark but brimming with emotion and purpose.
Verdict: Riskin’ It All by D.A.D. is a great early nineties rock record, the kind of album that you can just put on and let it play, the songs fit very well together and the record flows, you will not want to turn it off. What more can you ask for? Give it a try.
D-A-D are still together and have released eight more albums since Riskin’ It All, but none of those records have been released in the US and they saw the band exploring a variety of genres and styles, unfortunately never coming close, in my opinion, to achieving the greatness achieved by No Fuel Left For The Pilgrims and Riskin’ It All.