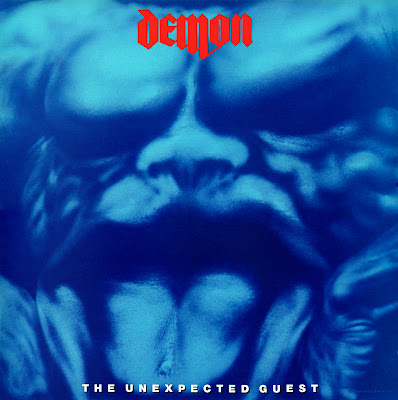 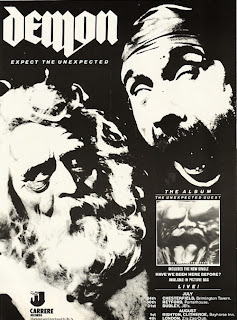 Demon formed in Midlands, England in 1979, the original line-up was Dave Hill on vocals, Les Hunt and Mal Spooner on guitar, Chris Ellis on bass, and John Wright on drums. After an independent single they signed with the French label Carrere, also home to Saxon at the time. Carrere released Demon’s first album, Night of the Demon, in 1981. The record was lumped in with the NWOBHM but it’s really just a hard rock record similar to what Uriah Heep or Thin Lizzy were doing in the early eighties. It’s a forgettable record, but the same cannot be said of the band’s second album, The Unexpected Guest, which came out in 1982.

Okay, bad album cover. At first glance it’s a face? A scary demon face? Wait a minute! Upon closer inspection it’s really the rather ripped torso of a member of the Blue Man Group. Terrible, but what we’re truly concerned about here is the music, which is outstanding. Dave Hill has a great voice for hard rock and he kills it on this record. The album begins with a criminally overlooked hard rock/metal classic called “Don’t Break the Circle.” The song is built upon a solid foundation of excellent riffs. The verse chugs along nicely and segues into an awesome bridge that includes an album title mention, then the truly memorable ominous chant of a chorus unfolds. Great song and it also features a killer guitar solo.

Second song “The Spell” is a very cool hard rock tune but the third song is when the album really hits its stride. “Total Possession” is the most upbeat song about demonic possession you are ever going to hear. These lyrics should not be delivered within such a catchy melody. Let’s sing along:
Total possession he’s out on his own
A crazed look of an insane man
A twisted face, a tormented victim
Someone’s moving upstairs
A life leaks away under the shadows
There’s no hope for him now
A tortured soul lies bleeding
Oh Father in Heaven where are you now?
This strange dichotomy, evil lyrics delivered in an upbeat manner, continues with the next song, “Sign of a Madman.” We’re either contemplating murder or suicide but we’re smiling.
Next up is “Victim of Fortune,” a quality tune but a tad generic, it simply sets the stage for the next song, my favorite on the album, “Have We Been Here Before,” a joyous celebration of some very spooky deja vu. What a great song.
The best song on the album is followed by the worst, a synth-drenched bluesy ballad called “Strange Institution.” What have they done to the bass? Is that even a bass? Next up is the hardest rocking song on the album, “The Grand Illusion.” Reminds me of Accept. The song’s lyrics deliver a very different message from the Styx song of the same name.
The second to last song, “Beyond the Gates,” isn’t great but the record ends on a high note with a fast-paced rocker called “Deliver Us From Evil.” The song’s lyrics seem to sum up the album and make me think that perhaps the record was supposed to tell a story. Wait, is this a concept album? I’d rather not try to ferret out the details. Just listen.
Demon’s next album, The Plague, was a synth-heavy snoozefest, very disappointing. The band would release six more albums between 1985 and 1992, writing some good songs along the way, but The Unexpected Guest was their moment to shine, and they did. 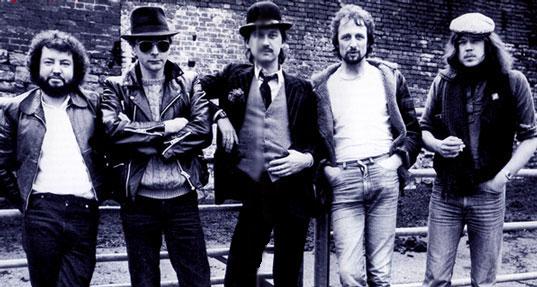