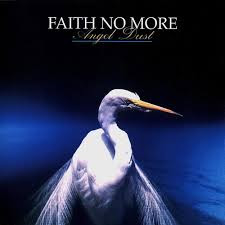 The Real Thing, Faith No More’s third album overall but the first with new singer Mike Patton, had been out for almost exactly one year before the second single released from the album, “Epic,” shockingly became a top ten smash thanks mostly to heavy rotation for the controversial video on MTV. The band toured for two years supporting the album and sold more than a million copies in the process. They understandably decided to take a year off before making the next record.

I was not a big fan of The Real Thing or “Epic” at the time and therefore was not eagerly anticipating whatever the band would do next. I must have been surprised when the first single from the new album came out and I liked it. I liked it a lot. The song was called “Midlife Crisis.”

“Midlife Crisis” is certainly not “Epic II” but like “Epic” it’s a very creative and original piece of work, an evil whisper of a verse unfolds into a wonderfully melodic chorus. Roddy Bottum expertly enhances the music throughout the album with little keyboard tweaks and sound effects, label executives were worried about what they called a gratuitous use of samples. Roddy went all out on the album, that’s for certain, and his work on “Midlife Crisis” is essential to the quality of the track. 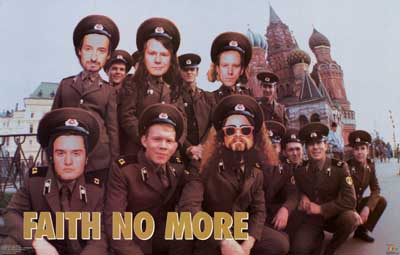 There is very little similarity between The Real Thing and Angel Dust. Never before and never since has a band followed up a big hit album with such a completely off the wall record full of such ambitiously challenging material. While it’s true that The Real Thing was quite different from its predecessor, Introduce Yourself, a huge variable going into the making of Angel Dust was obviously Mike Patton. He joined the band after The Real Thing was already written, so clearly a major reason Angel Dust is so different is the input and influence of Mike Patton. Patton released a very odd album with his band Mr. Bungle between the two Faith No More albums but I don’t believe that had much to do with the band’s shift in direction. I think the band simply made the next album they wanted to make, as a band, unencumbered by what should have been the natural pressure the replicate The Real Thing‘s success.
I remember my friend bought the album first and we listened to it constantly in his car. It was nothing like The Real Thing. Not that The Real Thing was bad, I liked “From Out of Nowhere” and the title track and I liked the band’s song “The Perfect Crime” from the Bill & Ted’s Bogus Journey soundtrack but Angel Dust was a strikingly original piece of work. I remember when guitarist Jim Martin eventually left the band the reason given in the press was the fact that he wasn’t satisfied with the role his guitar played in the band’s music. This is the guy who was in a band with Cliff Burton in high school. He was a serious musician with lofty ambitions. It’s true, the keyboards and bass play just as significant a role as the guitar in Faith No More and there is always a lot going on but Martin’s work on Angel Dust is stellar and vitally important to the tone and feel of the record. Much of the album is far heavier than anything the band had previously done.
Angel Dust opens with a strangely upbeat infomercial for life called “Land of Sunshine.” It’s a great song brimming with sarcasm and you can tell right away this record is not going to be like any record you have heard before. “Land of Sunshine” is an uplifting smirk of a song.
Next up is an insane track with a thrash metal verse and a death metal chorus. Mike Patton is the man of 1000 voices on this album and during “Caffeine” he sounds like nothing short of a homicidal maniac. As frenzied as the song is it still feels like a coda to “Land of Sunshine,” somehow the two songs belong together and I can’t imagine listening to one without the other.
The third track is “Midlife Crisis” and this brings us to the album’s ballad. I hope the label wasn’t hoping for a hit because this ballad is a ludicrous song called “RV.” Mike Patton is portraying a character in the song, a depressed couch potato who presumably haunts a trailer park like the ghost of the life he squandered. The chorus of the song is not as uplifting as most label execs probably want their band’s ballads to be:
I hate you
Talking to myself
Everbody’s staring at me
I’m only bleeding

“RV” is followed by another deranged death/thrash tirade of a song called “Smaller and Smaller” and then Side One ends with a very pretty, melodic tune with the uplifting title of “Everything’s Ruined.” The catchy song seems to tell the story of Bernie Madoff more than ten years before the story of Bernie Madoff could be told. It’s an odd topic for a Faith No More song, financial ruin is.
Side Two kicks off with a catchy but generic tune called “Kindergarten” and now we’ve come to the most outrageous song on the album, a boisterously offensive track called “Be Aggressive.” In the verses of the song Mike Patton seems to describe, in detail, his desire to perform oral sex on his male counterparts. The chorus of the song is quite literally a cheer performed by cheerleaders:
Be aggressive
B-E aggressive
B-E-A-G-G-R-E-S-S-I-V-E
What the fuck? Remember, this band sold a million copies of their previous album. How much would you pay to see the looks on the record executives faces when the band turned in a demented song like this? I suppose they got away with it because they also delivered songs like the next one, “A Small Victory,” an absolutely flawless pop gem. This obviously should have been the first single released from the album. They did make a video for it eventually. What an amazing track, the best on the album.
The band closes out Angel Dust with two more exercises in lunacy called “Crack Hitler” and “Jizzlobber.” Again, the record executives must have been ecstatic seeing song titles like these, imagining the sticker pasted across the cover: Featuring Jizzlobber! Those last two songs are the most reminiscent of Patton’s other group, Mr. Bungle, and I suppose they were tacked on to the end of the album for a reason. All in all this is a fantastic album in my opinion, one of those records you can just put on and enjoy the ride. These songs belongs together, it really should be listened to as a complete work. The creativity and sheer exuberance on display is frightening and worthy of much admiration. 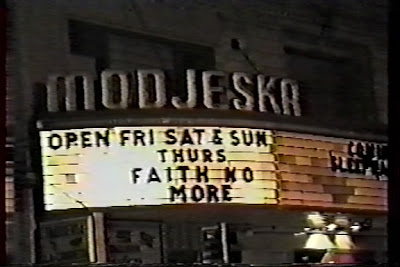 I was lucky enough to see the band on the Angel Dust tour at the Modjeska Theater in Milwaukee and toward the end of the band’s set a female fan managed to climb on stage and before she could dive ba
ck into the crowd (which was what he obviously intended to do) a couple of the orange-shirted security staff brutally tackled her and slammed her into the stage. Roddy Bottum and Mike Patton witnessed the assault and immediately, without hesitation, intervened and began fighting with security. The entire band dropped their instruments mid-song and feedback droned as a melee ensued. At some point Mike Patton scooped the microphone back up off the stage and spoke these words:
“Burn this fucking place to the ground.”
Patton threw the mic back down and the band left the stage, no encore forthcoming, just more feedback. Tension permeated the room, you could feel the riot brewing. The crowd was furious. The set had been cut short because of musclebound security assaulting a female fan right in front of us. About ten security guards stood shoulder to shoulder across the front of the stage, arms folded, staring out at us, as if daring us to try it, just try it you pussies. And then a chant began to rise from the crowd. Soon everyone joined in.
“Steroids! Steroids! Steroids! Steroids!”
I have to think that only a Faith No More crowd would have chosen a satirical chant of mockery over a riot. It was a beautiful thing. The real thing.