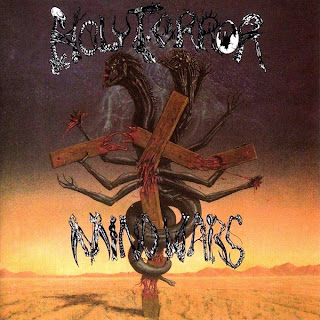 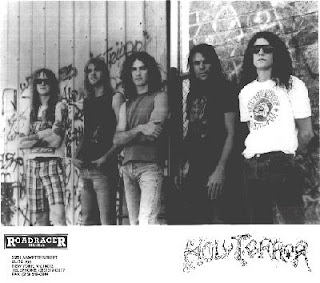 Agent Steel were an L.A. speed metal band somewhat similar to early Helloween. The band’s first album, the cleverly titled Skeptics Apocalypse, was released by Combat in 1985. At some point one of the band’s guitarists, Kurt Kilfelt, and singer John Cyriis had a falling out and Kilfelt left to form his own band with singer Aaron Redbird, bassist Jeff Matz, drummer Joe Mitchell, and second guitarist Matt Fox. The band was christened Holy Terror and their first album, Terror and Submission, was released by Combat in 1987 but the band really hit their stride on their second album, Mind Wars, released in 1988.

“The idea was to make an epic metal record.”
They succeeded. Mind Wars was recorded over the course of seventeen days, and apparently a lot of drugs were involved. Kurt Kilfelt describes the creative process and obstacles the band were up against this way:
“We really wanted to get the old seventies type metal sound to it, this didn’t go over very well with the label, they wanted what every one else was doing, hard panned right and left brittle processed guitars, no bass and really loud drums. My attitude was fuck ’em…”

The band toured America with DRI and Kreator and Europe with Exodus and Nuclear Assault after the record was released. Holy Terror were better than all of those bands, in my opinion. I am not a huge thrash guy beyond the obvious albums (Master of Puppets, Rust In Peace, Sound of White Noise, etc) but Mind Wars is as good as it gets. This is not paint by numbers thrash metal, Holy Terror were a creative and ambitious group. The album opens with a Slayeresque basher called “Judas Reward.” It’s good but actually one of my least favorite songs on the record.

The next song, “Debt of Pain,” is amazingly melodic for a thrash metal tune. You can hear a distinct Iron Maiden influence but the band tweak it big time. The song is an artistic metal assault, brutal yet refined. The production on the album is a bit muddy but the quality of the songwriting more than compensates.

Third track “The Immoral Wasteland” is a classic example of galloping heavy metal, conducive to headbanging but also wonderfully melodic.
Up next is an insane three part epic: a bruising burst of metal called “A Fool’s Gold” segues into a plodding instrumental bit called “Terminal Humor” from which the killer title track bursts forth at about the 5:16 mark.
Side Two hits us full speed ahead with a slamming track called “Damned By Judges.” A brutal verse culminates in a great chorus.
The next song, “Do Unto Others,” is a hardcore song with melodic moments. Holy Terror were an innovative group that refused to be pigeon-holed. It’s fair to call this album thrash metal, but there’s a lot more than that going on.
The second to last song on the album “No Resurrection” features a verse that vacillates between thrash and death metal but once again a melodic chorus arrives just in time. The key word for this album, obviously, is melody, a key component for me that was often missing from your run of the mill thrash metal tune.
The album ends with a pounding track called “Christian Resistance.” Play it loud. 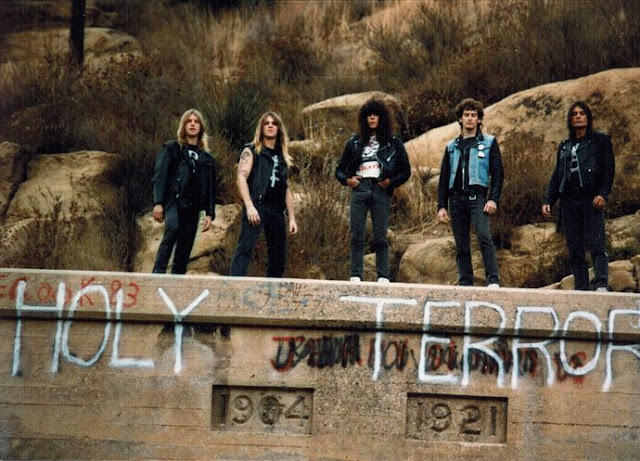 A few members of the band relocated to Seattle in the early nineties and formed a punk band called Shark Chum.