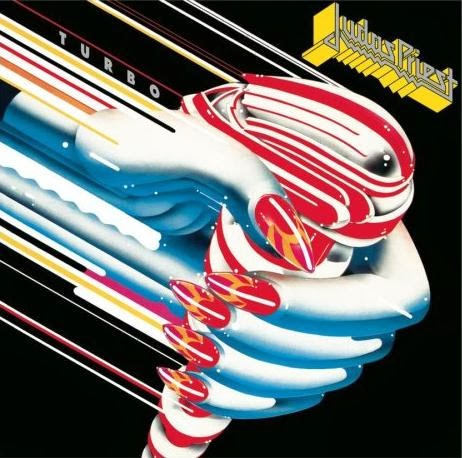 Judas Priest’s tenth album Turbo is one of those albums that metalheads just love to hate. 1986 was definitely a confusing year for heavy metal fans. Looking back it’s ironic that at the same moment thrash metal was peaking with albums like Master of Puppets, Reign In Blood, and Peace Sells many of heavy metal’s earliest purveyors (Ozzy, Sabbath, Nugent, Priest, Quiet Riot) were jumping in the sack with keyboards and MTV. 1986 was the year of Van Hagar, the year Bon Jovi went to number one, the year Poison debuted, and the year Queensryche decided to start dressing like Duran Duran. Even a band like Savatage chose 1986 to take a shot at mainstream acceptance with the hamfisted Fight For The Rock album. So Judas Priest were not alone in their commercial aspirations but since there was arguably no band more responsible for the creation of heavy metal as a genre and considering that the band’s previous album, Defenders of the Faith, had been their heaviest yet, well…all the more reason Turbo must have shocked the band’s hardcore fans.
But here’s the thing, Turbo is a really good hard rock album. The album was produced by the same guy, Tom Allom, who had produced every Priest album since British Steel (not to mention On Through The Night and Headhunter), so this wasn’t a case of bringing in the slick producer. Every song was written by KK, Glenn and Rob; nary a song doctor in sight. Obviously the band made a conscious choice to make a more accessible album chock full of potential hit singles, at least potential hits in 1986, but is this something we should hold against them? I don’t think so. Here’s why: they did it well. Really well. Look, I’m a big heavy metal fan, but I’m no metal purist, and my favorite metal is metal with hooks. I like a good single, and I can deal with some keyboards. No need to question my manhood! As far as I’m concerned there has always been too much of the tough guy mentality with metal fans. Too many rules about what metalheads can and can’t like.
“Turbo Lover” is a cool song. Yeah that’s a synthesizer but really, who cares? Sure I’d like the song even more if they’d played it all on guitar instead, but “Jump” and “I’ll Wait” would be a lot better too. Did you know that’s not even a guitar on “And The Cradle Will Rock?” I think Eddie ran an organ through an amp, something like that. Who cares, that song is killer and “Turbo Lover” is damn good as well, I like the melody of the song and especially the vibe. The video did nothing to help the band’s image at the time, but hey, again, who cares? The song is really good. The next two songs on the album, “Locked In” and “Private Property” are shameless attempts at hit singles but shamelessness is perfect because they had nothing to be ashamed of, both songs are quite good, I think they’re fun songs, this is a great album to play loud in the car with the windows down, singing along. Try it some time.
The next song, “Parental Guidance,” is one of my favorite Judas Priest songs and here’s why: I love the melody, I love the hooks. This is a great song, catchy as hell. Fuck off Tipper!
The next song “Rock You All Around The World” is a great upbeat tune with a cool chorus. “Out In The Cold” comes next. It’s a keyboard-driven, echo-laden track and I’m of the opinion it would be a much better song with less oppressive production but that being said it’s not bad, not bad at all. The next two songs are the worst two on the album: “Wild Nights, Hot and Crazy Days” is decent but the chorus is a let-down and “Hot For Love” is the only song on the album I would say I dislike. The verse isn’t bad but the chorus really falls flat. The album closes with a killer track called “Reckless” which the band actually decided not to give to the Top Gun soundtrack (oops!). This is probably the second best song on the record after “Parental Guidance.” Great riffs and a strong melody. The production on this record is for the most part quite good and the guitar solos are killer. So what’s the issue? Oh yeah, the tough guy thing.
Apparently Turbo was originally conceived of as a double album called Twin Turbos and most of the additional tracks ended up on the band’s next and far inferior album, Ram It Down, or have been released as bonus tracks on various reissues.
Final verdict: Turbo is a really fun hard rock album.