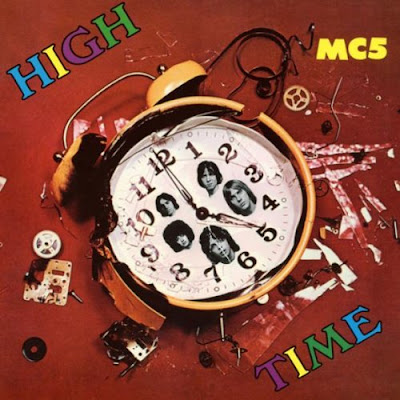 MC5 are perhaps best known for their 1969 debut album, Kick Out The Jams, which was recorded live and features the infamous “Kick out the jams motherfuckers!” intro which was censored on some later versions of the album, “brothers and sisters” clumsily dubbed over the four offensive syllables. Many people are also quite fond of the slick garage rock of their second album, Back in the U.S.A., produced by Jon Landau, who would later discover “rock and roll future” with Bruce Springsteen. And there you have it, the MC5, two albums of fine sixties rock and roll. Wait…they had a third album?

YES THEY HAD A THIRD ALBUM! It is called High Time, it was released in 1971, and it is so much better than their previous work that, in my opinion, resistance is futile. High Time is a freakin’ romp. High Time is the beating fetus heart of seventies rock and roll. A bunch of albums came out in 1971 that left the sixties in the rearview and launched seventies rock, albums like Love It To Death, Sticky Fingers, Hunky Dory, Electric Warrior, and yes, High Time. I see a clear deviation point between rock and roll in the sixties and rock and roll in the seventies, and it happens with records like High Time in 1971. MC5 had embodied sixties rock, they were radicals, they were the only band that showed up to play at the doomed protest at the Democratic National Convention in Chicago in 1968, but come High Time it wasn’t as much about sixties radicalism or making a statement anymore. High Time isn’t revolution for the hell of it, it’s rock and roll for the hell of it.

Just listen to the first song on the album, “Sister Anne.”

As far as I can tell “Sister Anne” is a sarcastic song about a scary nun, but in essence this is party rock. Up tempo, great riffs, chanted chorus. Let’s blow the roof off the church of rock and roll. The party continues with the next song, “Baby Won’t Ya.”
Okay, so as much as I love “Sister Anne,” “Baby Won’t Ya” is better! Same vibe, more fun. The verdict is in for me at this point, it doesn’t even matter what else the band has in store, this album is already a home run, but the hits keep coming. Up next is a change of pace, a great ballad called “Miss X.”
Closing out side one is perhaps the most overtly political song on the record, and the most reminiscent of the band’s earlier work, “Gotta Keep Movin’.” It is my least favorite song on the record. The second side starts strong with “Future/Now,” a song that was covered appropriately by Corrosion of Conformity on their excellent 1991 album Blind.
The next two songs on side two return to the same high quality of the first three songs on side one. First we get guitarist Wayne Kramer’s second composition (he also wrote “Miss X”), an absolutely killer song called “Poison.”

“Poison” is followed by the even better “Over and Over,” guitarist Fred “Sonic” Smith’s third songwriting contribution (the guy also wrote “Sister Anne” and “Baby Won’t Ya” for gosh sakes!) and probably my favorite song on the record.
The last song on the album, also written by Smith, is called “Skunk (Sonicly Speaking).” It’s kind of a blowout jam, not my favorite but a fine capper to a killer album. Atlantic dropped the band after High Time failed to shift the appropriate number of units. The band tried to hold it together for a bit but eventually broke up. The record itself faded into obscurity, which is a travesty. MC5’s rebellious early work is respected and revered and for good reason, but what about High Time? It is the band’s creative peak, a cohesive collection of great songs by a band firing on all cylinders, a goddamn rock and roll record if I ever heard one. In many ways seventies rock is treated like the bastard child of sixties rock by the rock Illuminati, but as far as I’m concerned that bastard child kicked Daddy’s ass.
Fred “Sonic” Smith formed a new band, Sonic’s Rendezvous Band, and they put out an awesome single called “City Slang.” Freakin’ great. Damn that guy was good.
Sonic married Patti Smith (no relation, oh wait…) in 1980 and both essentially retired from the music business  to raise a family in Michigan. Sonic died tragically in 1994.
Wayne Kramer would eventually team up with a post-Heartbreakers Johnny Thunders (who actually moved to Detroit) in a short-lived band called Gang War.
MC5’s brilliant singer Rob Tyner died in 1991. Bassist Michael Davis died last year. Wayne Kramer and drummer Dennis Thompson are flying the MC5 flag again with the highly appropriate “Handsome Dick” Manitoba (remember him? see my earlier post about the Dictators) filling in for Tyner.