Now Hear This: Pantera – Projects In The Jungle 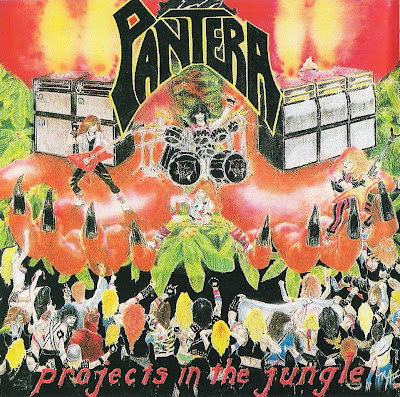 Even though the average Headbanger’s Ball viewer hadn’t a clue at the time, Cowboys From Hell was Pantera’s fifth album and their second with Phil Anselmo on vocals. When Cowboys From Hell came out very few people outside of the underground metal community had any idea that it wasn’t Pantera’s debut album, and the band did nothing to change that. In my opinion Pantera should have embraced their past and presented themselves as an evolving band, not a new band. Instead, as more people began to discover that Cowboys In Hell wasn’t the band’s first album, it could only be assumed that the band had something to hide. Were they ashamed of their earlier albums? Were they afraid that what their earlier albums represented would compromise the success of the new Pantera? It is undeniable that the band significantly altered their image and sound once they signed with a major label and a questioning of the motivation behind the band’s drastic reinvention was inevitable. Sure, maybe it was a simple progression, the band changed organically over the course of seven plus years, but one could also reasonably put forth the hypothesis that the band collectively made a conscious decision to bury their past and recreate themselves as a thrash band. Even with the questions of who, what, when and where answered, the question of why, of the motivation behind the change, still remains. What motivated such a complete makeover and was it sincere or calculated? Maybe a little of both?
I saw Pantera twice on the Vulgar Display of Power tour and it was the only time in my life that I ever stagedove, but I’m gonna come right out and say it: Projects In The Jungle is my favorite Pantera album. To truly appreciate how impressive Projects In The Jungle is you have to consider a few things:
1) the album was basically self-produced by the band (Darrell and Vinnie’s father Jerry Abbott is credited as producer)
2) the album was self-released on the band’s own record label, Metal Magic.
3) Diamond Darrell Abbot was 18 years old, I REPEAT 18 years old when the album came out 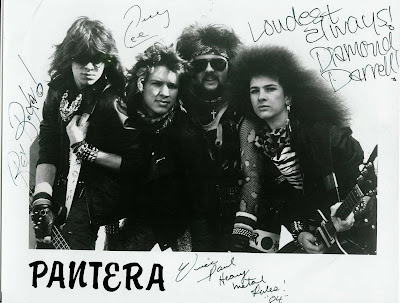 People love to debate what is or isn’t heavy metal, especially people who don’t know what the fuck they’re talking about, but in 1984 there was no debate, an album like Projects In The Jungle was quintessential heavy metal. That was a big year for metal, albums like Out of the Cellar and Stay Hungry dominated MTV and the Billboard charts and bands like Bon Jovi and W.A.S.P. made their debuts. Projects In The Jungle does not pale in comparison to any of those albums but rather holds its own against most of its then contemporaries in heavy metal. Tooth and Nail is a better album, but Projects In The Jungle puts up a fight. Of course a little album called Ride The Lightning also came out in 1984 and a change was a-gonna come, but all things considered Pantera had nothing to be ashamed of, rather they should have remained proud of Projects In The Jungle, it’s an impressive work and was quite an accomplishment at the time. They were young and they did it themselves. Their passion resounds in the work. All of the cynical hindsight smirkery about “glam” is pseudo-tough guy bullshit. What music you listen to doesn’t make you tough, that’s a ridiculous mindset. You like what you like, taste is something organic that develops in each individual, or at least it should be, and taste can be quite broad. I am perfectly capable of liking both Projects In The Jungle and Vulgar Display of Power, there is nothing odd or strange about that, the two albums are not for mutually exclusive fanbases. It is my belief that many people, subconsciously or not, outwardly manipulate their “taste” to present themselves in a certain way, to cultivate a certain image. They adorn their personalities with whatever they openly profess to “dig.” When it comes to Pantera, what anyone found to dig about Far Beyond Driven is far beyond me. I bought the album at a midnight release party and could find nothing at all to like about it. I thought it was a piece of shit. It seemed forced, I didn’t hear any heart or passion in the music, I felt like the band was playing a role by that point, pushing the manila envelope. Of course the album debuted at number one.
Projects In The Jungle is a much more honest and sincere record than Far Beyond Driven, in my opinion. Projects In The Jungle is a tribute album, a tribute to all of the bands that the members of Pantera
worshiped and wanted to be like. As I earlier pointed out, Diamond Darrell was only eighteen years old but he was already an amazing guitar player making very professional sounding records, on his own, for the love of the music. Just listen to the opening track, “All Over Tonight.”
Obviously the band were very into High n’ Dry, which is quite possibly my favorite heavy metal album of all time. They did a great job of writing their own version of “Another Hit and Run.” The next song, “Out For Blood” is an amazing heavy metal riff fest, must I reiterate that Diamond Darrell was only eighteen at the time? This song reminds me of another of my favorite eighties metal albums, Fire Down Under by Riot.
“Out For Blood” is followed by a minute and a half show-off guitar solo by Darrell called “Blue Light Turnin’ Red.”
Next up is one of the simplest tunes on the album, a great hard rocker called “Like Fire.” This is the kind of song that would definitely turn off the tough guy Pantera fan who thinks that he can only listen to detuned guitars played by dudes with goatees because it makes his muscles (and other too small things) bigger, but I enjoy the song a lot.

“Like Fire” is followed by the poppiest song on the album, an AOR classic called “In Over My Head.” Again, on the surface this is nothing like “Fucking Hostile,” but both songs have a catchy hook and it is perfectly reasonable for a rock fan to like both songs, there is absolutely no reason to have to choose one or the other. You like what you like.
Next up is the title track and the song on the album that might most closely resemble the band’s later work, there is definitely a heavy groove element to the riff. The problem is the song doesn’t really have a hook, the melody is lacking. So it’s one of the heaviest songs, but one of my least favorites.
The title track is followed by a song that is as generic as its title, “Heavy Metal Rules.” After that we get the required ballad, “Only a Heartbeat Away.” It’s not that bad. The second to last song on t
he record, “Killers,” revolves around a killer (pun intended) riff, this some of Darrell’s best work on the album. It’s a classic eighties metal tune and as I argued earlier, the band should have been proud of a song like this, who cares what they were wearing at the time.
The last song on the record, “Takin’ My Life,” is a real oddball and probably the song the band wanted buried more than any of the others. It’s not far removed from a band like Honeymoon Suite, which is not a bad thing at all in my opinion, but “Takin’ My Life” is not a great song. So really it’s the first side of the record that I like the most, but “Killers” is a great song from the second side.
I like a lot of rock music from many different eras and genres but when the chips are down I will most often go to eighties metal for the joy and comfort it brings me, and Projects In The Jungle is certainly in my comfort zone. Projects In The Jungle was followed up in 1985 by the band’s last album with singer Terrence Lee, I Am The Night. The first song on that album, “Hot and Heavy,” is freakin’ awesome.
Terrence Lee was replaced by Philip Anselmo by the time the band’s next album, Power Metal, came out in 1988. Lee rechristened himself Terry Glaze and formed a new band called Lord Tracy. The band signed with MCA and released an album called Deaf Gods of Babylon in 1989. It’s an okay record, appropriately filed away on my record shelf between The Long Ryders and Lords of the New Church. I like “East Coast Rose” and “In Your Eyes.”
https://www.youtube.com/watch?v=ME8y0HjvTqA
https://www.youtube.com/watch?v=YDvTUe0Ad6w
I remember my local classic rock radio station used Lord Tracy’s amusing song “Piranha” as a bumper.
“This is a song about a fish…and fish…are bad!” 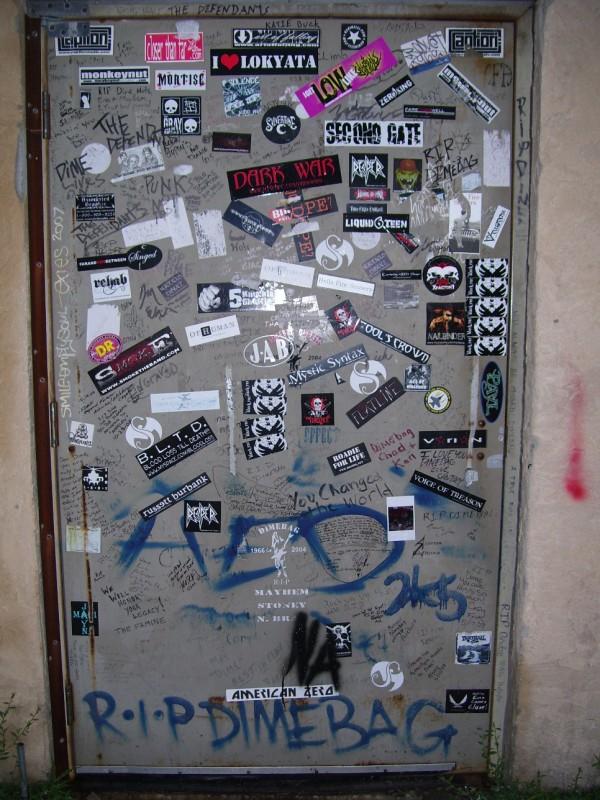 What happened to Darrell Abbot was an astonishing and horrific event and the fact that it got so little attention by the news media was an insult to rock fans everywhere. Darrell Abbott was a true artist, an extraordinarily talented individual who had worked long and hard to rise to the top of his field. For him to be murdered onstage, in front of his fans, was unimaginable, and for such a historical calamity to get short shrift by an out of touch, elitist news media infuriated me to no end. Heavy metal is an art form that millions of people sincerely appreciate and benefit from. It’s not a joke. If you want to see a joke take a visit to MOMA, check out some of the ludicrous bullshit that these pretentious dipshits call art, and yet they look down their noses at something as creative and heartfelt as heavy metal music. Who needs ’em.