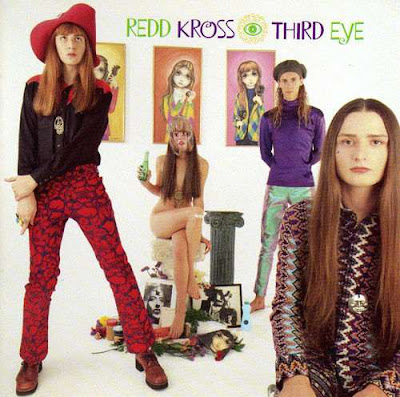 Red Cross was formed by teenage brothers Jeff and Steve McDonald in 1980 and they were there for the beginnings of the L.A. hardcore scene and saw former members go on to join groups like Black Flag, Circle Jerks, and Bad Religion. The band’s early material, including a six song EP and full length album called Born Innocent, fell in line with the more accessible fringes of hardcore but after a threatened lawsuit by the real Red Cross and the subtle name change to Redd Kross the band issued an album of covers in 1984 called Teen Babes From Monsanto which included a version of the KISS classic “Deuce.”

That same year, 1984, the band appeared in and participated in the soundtrack for a low budget B movie called Desperate Teenage Lovedolls which was loosely based on the story of The Runaways.
The band’s first real album as a rock band called Redd Kross came out in 1987 on indie label Big Time. It’s called Neurotica and it’s highly respected by underground rock aficionados. The band signed with Atlantic and released a streamlined, professional rock record in 1990 called Third Eye. No longer a punk band by any stretch Redd Kross could easily have fit in with the glam metal bands that were dominating MTV at the time. Third Eye is a polished and extremely melodic album that a lot of potential fans missed out on. While Neurotica may have been “alternative,” Third Eye certainly was not.
The album opens with an epic ode to pretending to be a rock star in front of the mirror called “Faith Healer.” It’s not one of my favorite songs on the album but serves its purpose.
The next song, “Annie’s Gone,” is possibly the best song on the album, a driving rocker with a great hook.
Like I said, this album could definitely have been marketed by Atlantic as a glam metal album alongside hugely popular bands like Warrant and Slaughter, and to drive that point home it even includes a power ballad, a great one called “I Don’t Know How To Be Your Friend.”
After a song named for a female Japanese pop punk band called Shonen Knife comes the poppiest song on the album, a bouncy, very catchy number called “Bubblegum Factory.”


Side On
e ends with an excellent pop tune called “Where Am I Today.” Maybe Atlantic should have marketed them as glam, but an emotionally effective and artistic  song like this is what would have set them apart.
Side Two opens with an infectious blast of melodic rock called “Zira (Call Out My Name).”
A Beatlesesque ballad called “Love Is Not Love” is followed by a triumphant tribute to seventies rock called “1976.” The song is GREAT, and listen closely for what appears to be an uncredited appearance by Paul Stanley.
The second to last song, “Debbie & Kim,” is another keeper.
The album closes with my least favorite song on the album, “Elephant Flares,” but what a record it is, and one that will appeal to rock fans across the board. The band followed it up with another strong rock record in 1993, the slightly heavier Phaseshifter, and released another excellent album in 1997 called Show World, and that was it for Redd Kross until last year, 2012, when the band reconvened and graced the world with a new album called Researching The Blues.