Now Hear This: RIOT – Fire Down Under 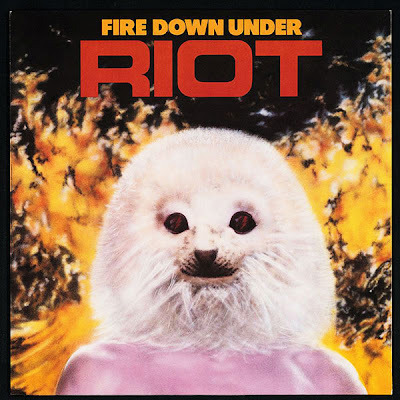 Riot formed in New York City in 1975 when guitarist Mark Reale joined forces with vocalist Guy Speranza, bassist Phil Feit, and drummer Peter Bitteli. The band recorded a demo which led to a deal with the independent label Firesign Records. Phil Feit was eventually replaced Jimmy Iommi and the band added a second guitarist, Louie Kouvaris, before entering the studio to record their debut album, Rock City, which would be released in 1977. The album contained a stunningly great early metal tune called “Warrior.”
The band toured with AC/DC and Molly Hatchet but the record did not garner much attention and the disillusioned group were on the verge of breaking up when Neal Kay, an important supporter of the NWOBHM movement, started spreading the word about the band overseas. Hoping to capitalize on their sudden heavy metal notoriety in Europe the band quickly recorded a second album, Narita, which was released in 1979. The album is not as good as Rock City but the title track is probably my favorite instrumental of all time.
Sure they released a couple of the heaviest hard rock records of the seventies but in 1981 Riot would release one of the most kick ass heavy metal albums of all time, Fire Down Under. Reale and Speranza were the only remaining original members by the time the album was recorded, having added their former roadie Rick Ventura on guitar, Kip Lemming on bass, and Sandy Slavin (who would later resurface in Ace Frehley’s post-Trouble Walkin’ band) on drums.
Let’s pause for a moment to discuss Riot’s album covers, which are quite the conundrum. The band for some reason chose to adopt what appears to be an axe-wielding half man/half monkey with the head of a baby fur seal, supposedly named Johnny, as their mascot. Who, what, when, where, why, how? On the senseless cover of Fire Down Under we get a close up of half ass monkey boy’s baby fur seal face. It is an absolutely ludicrous album cover, as are all of the band’s covers, but for the cover of such a classic metal record to be so laughably nonsensical is extremely unfortunate, especially if it at all taints the appreciation of the music contained therein by the casual peruser. The songs on the record are amazing, insanely bad album cover be damned. One good thing about the album cover, though–it provided my infant daughter with her fifteen nanoseconds of fame thanks to Sleeveface.com. Check it out, it’s a doozy:

https://www.sleeveface.com/?p=2860
Back to the music, Fire Down Under begins with one of the most aptly titled heavy metal songs in history, “Swords and Tequila.” You know exactly what this song is going to sound like, I think that’s called truth in advertising.
Up next is the title track: killer riffs and a driving beat culminate in a chest-thumping chorus. A true classic.
After a trippy song with a decent chorus called “Feel the Same” we get to my favorite song on the album, a catchy as hell pop metal doozy called “Outlaw.”
Bet your life on the silver ball spinning ’round the wheel.
Will it land on the black or the red?
Outlaw’s got no deal.
Side one signs off with a great seventies groove inspired heavy metal boogie called “Don’t Let Me Down,” another classic. Side two bursts forth with a vibrant rocker called “Don’t Hold Back,” an insistent chorus crashing into a killer riff. The fretwork on this record is absurdly fantastic.
After a mellow intro that goes on too long we get a straight forward metal tune called “Altar of the King” followed by an inventive quasi-ballad called “No Lies.”
Next up is an excellent, galloping tune called “Run For Your Life.” Great song.
The album ends with an odd instrumental of sorts called “Flashbacks.” They should have let “Run For Your Life” close it out in style. When the album was reissued on CD in 1997 it included five bonus tracks, none of which would have made the album better but I like “You’re All I Needed Tonight.”
Guy Speranza left the band after Fire Down Under and ended up working as an ex
terminator in Florida until his untimely death in 2003. Speranza was replaced by Rhett Forrester who sang lead on the next two Riot albums before going solo. Those records, Restless Breed and Born In America, are decent but no Fire Down Under. Forrester was shot dead in 1994 in Atlanta, the victim of a bungled carjacking. Mark Reale kept the band going after Forrester’s departure but their sound evolved quite a bit. There are decent songs to be found on most of those later albums. Unfortunately Reale passed away in 2012 and with him, presumably, went Riot.