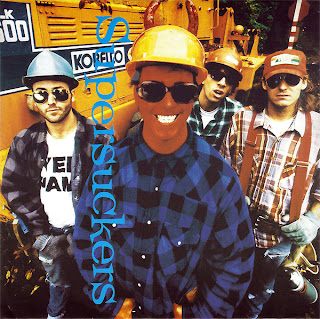 I was a freshman in college when my friend Andrew and I became obsessed with an album called The Smoke of Hell by a band called the Supersuckers. The album had a lot going for it: it was released by Sub Pop, Daniel Clowes of Eightball fame was responsible for the album cover, and the songs had titles like “I Say Fuck” and “Hell City, Hell.” Fourteen songs in 27 minutes, do the math: that’s less than two minutes per song. Andrew and I played the cassette over and over in the car in the fall of 1992 and were very excited come November when we got the opportunity to see the band live opening for Mudhoney at Marquette University in Milwaukee. The Mudhoney show was on a Saturday and two nights later, a Monday night, the Supersuckers were going to be headlining a show at a small club called O’Cayz Corral in Madison, WI. Since Andrew and I were only 18 at the time we were concerned that we would not be allowed into the O’Cayz show, which was not all ages.

But we had a plan: we hung around in the lobby outside the hall where the Mudhoney concert was going to take place and waited to spot a member of the Supersuckers. It worked! Soon enough here came the entire band minus Eddie, the singer. We approached them, explained to them about the show Monday night and asked if they could get us in.

“Sure,” said Ron Heathman, one of the guitar players. “Just find me. I’ll get you in.”
We were psyched. Monday night we walked the mile or two over to O’Cayz from my dorm, arriving at about 8:00 PM. As we approached the club Ron and the Supersuckers’ bassist and vocalist Eddie came walking around the corner. Ron recognized us when we started yelling and waving. Then Eddie spoke.
“You guys wanna get high?”
They were on their way to their van to smoke pot. Andrew and I did not even drink alcohol. As much as we loved the band we declined the offer. Eddie seemed confused.
“Uh, okay then,” Ron said. “Come on.” 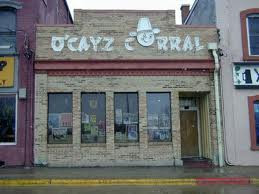 Ron walked us into the club, which was basically deserted. The other Supersuckers guitarist, Dan Bolton, was sitting at the bar. Ron led us to a table where the Supersuckers drummer, also named Dan (later known as Dancing Eagle), was seated. We sat down with Dan and Ron left (remember? the van?). Dan tried to make small talk but Andrew and I were young and awkward. He eventually got up and left. Our attention turned to guitar player Dan Bolton, who still occupied his barstool. He was really getting a kick out of whatever it was he was watching on the small television behind the bar, laughing loudly.
It was a black and white porno film. I will never forget how the film ended. A naked woman set a frying pan on the floor, then stood in the frying pan and lit herself on fire. Don’t worry, the “special effects” were awful, but it was meant to appear as if she stood there in the frying pan, screaming and writhing in agony, burning alive. Then the screen went black and written across it in white was this phrase:

I HATE YOU NOW

Dan Bolton laughed uproariously, clapping his hands. At this point the other Dan, the drummer, reappeared.
“Hey guys, you know the show isn’t going to start for several hours.”
But the ad in the paper said the doors opened at 8:00! We were confused. It was almost nine! You see, we didn’t know any better, but shows at O’Cayz never started before midnight, not even on a Monday night. Dan suggested we leave and come back. We must have been driving him nuts just sitting there gawking at his insane guitar player. We took Dan’s advice and walked all the way back to my dorm room. A couple of hours later we returned to O’Cayz and the guy at the door didn’t even ask to see our ID. In other words, we didn’t need any help from the band to get in after all.

The show was great but Dan Bolton was extremely drunk and out of control. At one point he stepped off the stage and onto the bar,
spilling several drinks. There was a girl who spent most of the show dancing near the stage and at one point Dan Bolton hopped down and tried to dance with her. Apparently his hands went places they shouldn’t have gone and the girl became very upset and stormed out. She was yelling things but could not be heard over the music. Others began to leave. The incident even got written up in the local student newspaper and the next time the band swung through town it was mentioned again. More people in Madison probably knew about the groping incident than knew who the Supersuckers were.

The Supersuckers formed in 1988 in Tucson, Arizona. They originally called themselves the Black Supersuckers, which was the title of a film they liked. Guess what kind of film. They were initially a five piece band with a lead singer named Eric Martin (not the Mr. Big guy). When the band decided to move to Seattle in 1989 Martin chose to stay behind in Arizona. He would soon die from a drug overdose. The band later wrote a song for his mother called “Marie.” They did record some demos for Sub Pop while Martin was still in the band, but they were not released until 2009. I think “Girl I Know” from these sessions is amazing. 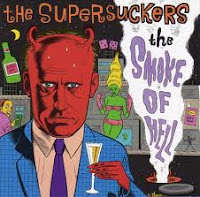 Once the band had relocated to Seattle bassist Eddie (later Eddie Spaghetti) assumed vocal duties and the band released several singles before signing with Sub Pop. The songs from those singles were collected on a CD called The Songs All Sound The Same. Their first full length album, The Smoke of Hell, was released by Sub Pop in September of 1992. It features classics like “Caliente” and “Ron’s Got the Cocaine.” Sub Pop also released a 45 at the time that featured the band covering Ice Cube’s “Dead Homiez” and on the b-side was the punk version of “Hell City, Hell,” which was performed in a loungy way on the album. The punk version is way better, check it out: 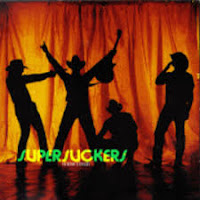 March of 1994 saw the release of the band’s second album, La Mano Cornuda, which means “the horned hand.” Whether you believe it was Gene Simmons or Ronnie James Dio who invented the satanic metal salute, the Supersuckers are the only ones who named an album after it, and what a great album. As much as I enjoyed The Smoke of Hell it did not prepare me for La Mano Cornuda. The former was fast-paced tongue in cheek punk rock, great stuff but the songs really did all sorta sound the same. On the latter album the band began to dole out cleverly written, hook-laden rock songs with punk trimmings. Feast your ears on the first song, “Creepy Jackalope Eye.”
Honestly, does it get any better than that? The next three songs are all almost as good: “Seventeen Poles,” “High Ya,” and “On the Couch.” The album sags in the middle but hits a high note with an ode to Dan “Thunder” Bolton’s guitar, “Gold Top.” 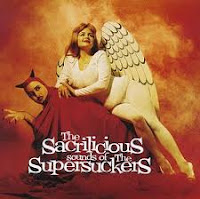 Two weeks before the band were scheduled to record their third album guitarist Ron Heathman was suddenly replaced by Rick Simms from the Didjits. I’ve heard tell that Ron’s hasty exit was somehow related to drugs and/or possible jailtime, but I’m not sure any of that is true. Regardless, I was not happy about his departure or his replacemen
t because I had seen the Didjits live at some point and hated them for some reason. That being said, I love the Lee Harvey Oswald Band, which Rick Sims was also involved with. The album that the Supersuckers released with Sims in 1995, The Sacrilicious Sounds of the Supersuckers, had its moments but was a disappointing follow-up to La Mano Cornuda. I do like several of the songs quite a bit, especially “Doublewide” and “Hittin’ the Gravel.”

At some point the band announced that their fourth album was going to be a country album. This was not as surprising as you might think because:
1) the band had released a country EP billing themselves as The Junkyard Dogs.
https://open.spotify.com/track/7pHhArVbfUSsdphGNlECO5
2)  band members regularly wore cowboy hats
3) “Born With a Tail” and “Don’t Go Blue” from Sacrilicious had country leanings.
They called the album Must’ve Been High. I was glad to see Ron back in the band but I didn’t like the album very much. That was 1997. In 1998 the band showed up on the BASEketball soundtrack with an awesome return to rock called “Psyched Out.”
Sub Pop released a farewell compilation in 1999 called How the Supersuckers Became the Greatest Rock and Roll Band in the World and later that year the band’s next album, The Evil Powers of Rock N’ Roll, was released by Koch Records. It’s a pretty good rock album with a couple of country detours. “Santa Rita High” and “Dead Meat” are great.
The band was not heard from again until 2002 when they released a split album with Electric Frankenstein appropriately called Splitsville, each band got five tracks, one of which was a cover of a song by the other band. Get it? The four Supersuckers originals (“Then I’m Gone,” “Shit Fire,” “Devil’s Food,” “Kid’s Got It Comin”) are all great, in fact this is my favorite release by the band and “Shit Fire” is my favorite Supersuckers song.
In 2003 the band released their sixth studio album, Motherfuckers Be Trippin’. It’s a really good record, not as good as Splitsville but better than Evil Powers. “Rock Your Ass” is a near perfect Supersuckers song:
A compilation of various songs, including the Splitsville tracks and several singles, was released in 2005 and in 2008 the band’s seventh album, Get It Together, appeared. I was disappointed.
In conclusion, the Supersuckers were a really fun band who wrote a lot of killer songs. I saw them live many times and they were always very entertaining, one of my favorite live bands ever actually. Why am I speaking in the past tense? Well, they are a different band now. Ron and Dancing Eagle are gone. Their last album came out five years ago and I didn’t like it very much. I’ll still check out whatever they do next but I stopped paying attention at some point. Sometimes I wish I had gotten high with them in their van, but in the end I made the right choice. I have a very addictive personality.