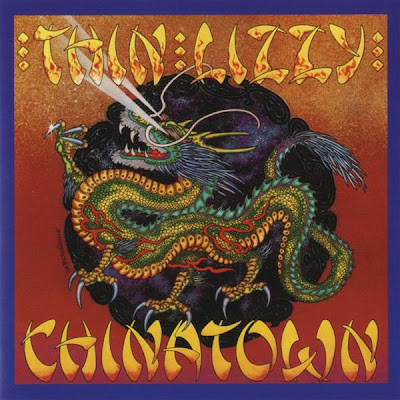 Thin Lizzy are one of my favorite bands of all time, despite the fact that I hardly even like their first four albums. Of course they were an entirely different band on the first three but the classic line up of Phil Lynnott, Scott Gorham, Brian Robertson, and Brian Downey was in place by the time fourth album Nightlife was put together, I just don’t like Nightlife very much. Most of the material is too mellow and…boring, I guess. It wasn’t until fifth album Fighting that the band morphed into a rock juggernaut that would churn out seven killer records between 1975 and 1981. 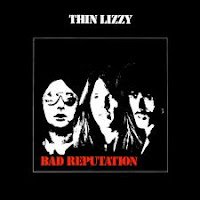 Obviously Phil Lynnott was the heart and soul of Thin Lizzy but the Thin Lizzy sound was defined by the twin lead attack of Scott Gorham and Brian Robertson on Fighting, Jailbreak, and Johnny The Fox. In 1977 Brian Robertson injured his hand and was replaced by Gary Moore for a two month North American jaunt opening for Queen (if I had a time machine…). Moore was more interested in pursuing a solo career and opted out of participating in the band’s next album, Bad Reputation, and Scott Gorham wound up playing most of the guitar parts himself. Brian Robertson apparently rejoined late in the process and may appear on one or two tracks, but he does not appear on the album’s unfortunate cover. Robertson did accompany the band on the subsequent tour supporting the album, which resulted in the Live & Dangerous record, but he was fired by Lynnott at the end of the tour. As the story goes Phil and Robertson just couldn’t get along and Robertson had only managed to remain a part of the band as long as he had because Scott Gorham continually lobbied on his behalf. Gorham knew there was gold in them there guitar harmonies. 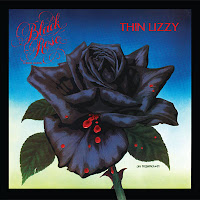 Gary Moore returned for more North American dates with Kansas and Blue Oyster Cult and remained with the group through the recording of the next album, Black Rose, but he reportedly lost patience with Phil’s substance abuse issues and resulting sloppy performances and quit in the middle of the Black Rose tour. Moore was temporarily replaced by Midge Ure from Slik and the Rich Kids and then by Dave Fett, formerly with Manfred Mann’s Earth Band. With the tour completed the band found themselves once again minus a guitar player. Phil and Gorham kept themselves entertained by playing gigs with a punk side project called The Greedies:

Phil also found the time to record and release his first solo album, Solo in Soho.

At some point Phil and Scott Gorham found themselves in the audience for a Pink Floyd performance of The Wall at Madison Square Garden and both were impressed by the band’s touring guitarist, Terence Charles “Snowy” White. They approached him about joining Lizzy and even though he wasn’t a hard rocker Snowy took the plunge.

It seems like Black Rose is the last universally highly regarded Thin Lizzy album but with Snowy White installed and a new twin lead attack in place the band released two more great albums, in my opinion, the first of which is 1980’s Chinatown. The album bursts out of the gate with one of my favorite Thin Lizzy songs, a wonderful call to arms called “We Will Be Strong.”

Song number two is the title track, a riff-heavy Lizzy classic. Phil Lynott’s artistry is fully on display for these two opening tracks.

Next up is an excellent pop number called “Sweetheart.” I suspect Phil could write this kind of song in his sleep, which is not a dig against Phil or the song, quite the opposite I think it would fit snugly on side one of Jailbreak.

Side One of Chinatown closes out with a driving rocker called “Sugar Blues” and an atmospheric punk-infused tune called “Killer On The Loose,” both decent songs but not as great as the first three.
Side Two opens with a fun rocker called “Having a Good Time.” It’s no “Emerald” but I like it.
Next up is a slightly odd five minute treatise on the near genocide committed against the Native Americans and the concurrent indiscriminate slaughter of the buffalo. It’s an important message to deliver but the song brings the album to a screeching halt. There’s a time and a place, Phil! That song is followed by a pleasant ballad called “Didn’t I.” Any flaws that might exist in the production of the album are most apparent on this gentle track. It’s a nice song, nonetheless.
The album closes with a killer tune called “Hey You,” my second favorite song on the record. “We Will Be Strong” and “Hey You” bookend the album magnificently.
And there you have it, a really good album in my opinion and one that seems to slip through the cracks more often than not when Thin Lizzy is discussed. It could have been an even better record if they’d replaced “Genocide (Killing of the Buffalo)” with the excellent “Don’t Play Around,” which ended up on the b-side of the “Killer on the Loose” single.
The band recorded one more album with Snowy White, 1981’s Renegade, and it’s almost as good as Chinatown. Snowy was replaced by John Sykes, who was between gigs (with Tygers of Pan Tang and Whitesnake) for what would be the last Thin Lizzy album, Thunder & Lightning. The band adopted a more metal sound for that record and while it contains a couple decent tracks it’s not a great record in my opinion. After Lizzy disbanded Lynott formed a new group called Grand Slam and recorded some very strong material before his tragic death in 1986 (he was only 36 years old). One Grand Slam tune, “Dedication,” was included on a 1991 compilation called Dedication: The Very Best of Thin Lizzy. It’s a wonderful song and a great way to close out the article. Enjoy.