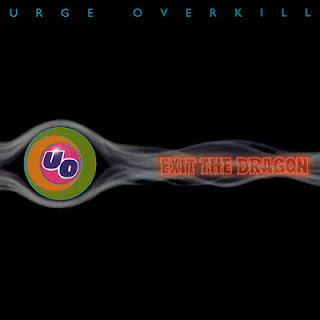 Urge Overkill formed in Chicago in 1986 and released three albums on local indie label Touch & Go before signing with Geffen in 1993. Their major label debut, Saturation, got a big push at the time and it’s a great record, far superior to the band’s previous efforts. The first single from the album “Sister Havana” was a polished gem of a tune and deservedly garnered some major airplay, on both radio and MTV, and the spectacular second single from the album “Positive Bleeding” was almost as good and probably had even more potential to be a hit but the album for some reason just did not take off. Then Quentin Tarantino prominently placed the band’s tepid and unnecessary cover of Neil Diamond’s “Girl You’ll Be a Woman Soon” in his 1994 magnum opus Pulp Fiction and the band suddenly had a random hit. That’s the way it goes with rock and roll in America: 1) band puts out a great album with killer singles and is greeted with indifference 2) novelty cover song that band previously recorded for toss off EP shows up in a movie for no reason and the band gets fifteen seconds of fame. THE END.

Urge Overkill obviously hoped to capitalize on the sudden exposure and street cred Tarantino’s cultural phenomenon of a film had gifted them with and they made a noble effort indeed, recording and releasing an excellent album called Exit The Dragon the next year. Guess what happened? The high quality album was criminally ignored, of course.

Urge Overkill consisted of Nash Kato, King Roeser, and Blackie Onassis. All three wrote and sang but Nash and King were responsible for the bulk of the material. Exit the Dragon opens with a pair of King Roeser tributes to seventies rock, “Jaywalkin'” and “The Break.”

“Jaywalkin'” is a fun song but “The Break” is truly excellent and benefits greatly from the uncharacteristically sparse production provided by the Butcher Bros. The idea was obviously to make a seventies sounding record and those involved succeeded. “The Break” is a hooky romp, great stuff.
Up next we get a pair of vintage Nash Kato tunes, which means they are poppier and bouncier than Roeser’s rockers, and infectiously hooky. “Need Some Air” and “Somebody Else’s Body” are both insanely catchy and obvious potential hit singles. Unfortunately the number one song of 1995 was “Gangsta’s Paradise” and the top five of the year was rounded out by two TLC songs, a Boyz II Men atrocity, and Seal’s “Kiss From A Rose.” The closest it got to rock and roll in the top twenty songs of that year were weak ballads Bryan Adams and Bon Jovi. Excellent and inspired rock gems like “Need Some Air” and “Somebody Else’s Body” were far too good to mix with that crowd.
Next up we get two more quality excursions into seventies rock from King Roeser, who was on fire! “Honesty Files” is a brooding vintage rocker and the scorching “This Is No Place” one of the best songs on the record.
Drummer Blackie Onassis takes the mic next for a moody tune called “The Mistake” which is quite similar to (but not as good as) Blackie’s emotionally resonant song “Dropout” from the band’s previous album, Saturation.
After another decent King Roeser rock song called “Take Me” Nash Kato delivers a clutch ballad called “View of the Rain.” It’s a very nice song, a thought-provoking verse culminates in a surprisingly effective chorus. The song is excellent and there’s no reason it shouldn’t have been all over rock radio at the time.
“Last Night/Tomorrow” is a two parter, the first half being a King Roeser slow burn and the second half, “Tomorrow,” a bouncy Nash Kato tune. I’m not sure why they were linked up but it works.
After two kind of boring ballads, Roeser’s “Tin Foil” and Kato’s “Monoploy,” we get one of the best songs on the album, a pent-up driving rocker by King Roeser called “And You’ll Say.”
The album ends with an epic nine minute duet by Nash Kato and an uncredited female vocalist called “Digital Black Epilogue.” The song is a seemingly heartfelt tribute to recently murdered Latin Pop superstar Selena. The subject matter is odd considering the context but it’s a cool song and a good way to close out the record.
King Roeser quit the band not long after Exit The Dragon inexplicably flopped. Kato and Onassis tried to keep the band going for a short while but cashed it in not long after being dropped by the record label. Kato released a decent solo album called Debutante in 2000 and I saw him open for Cheap Trick at the Washington County Fair in Wisconsin that year. In 2004 Roeser and Kato reformed Urge Overkill but I haven’t really paid much attention.
In conclusion, if you’re ever in the mood for a killer nineties version of seventies rock, you can’t go wrong with Urge Overkill’s Exit The Dragon. 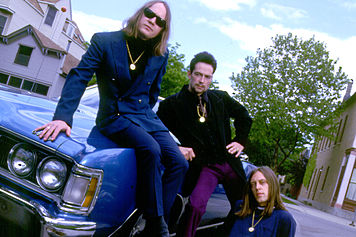