PAIN CITY – When Life Gets You (Album Review)

So, I’m a proper idiot sometimes! Listeners of the CGCM Audio Podcast Episodes are already aware of this, however! Let give a quick little backstory here. My email inbox is literally flooded daily with album promos, band news, video releases etc. Having a minor breakdown at the sheer overwhelmingness of it all, I started a massive campaign over the holidays. I spent hours upon hours quickly previewing and deleting emails. Usually if I see the words “death”, “core”, “brutal”, “tech”, “progressive”, Melodic death”, “grind or grindcore”, “ambient”, “instrumental”, “pop”, etc is cause for instant deleting. None of this is even accidentally “up my alley”. Yet I get oceans upon oceans of it. Should that test be passed, if there was an album/file attachment, I downloaded and then flushed. After three solid days of this, my inbox currently reads “9599 unread emails”…still a ton to go! The trouble here is that with such a quick deletion, I now have no band info/promo sheets for the album playing. This is the case with PAIN CITY – When Life Gets You.

PAIN CITY – When Life Gets You (Album Review) 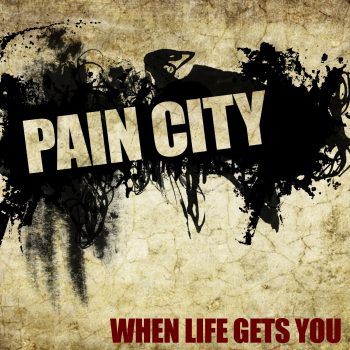 While doing some light chores and housework, I clicked this one from my newly downloaded pool. Honestly, I wasn’t expecting anything mind-blowing. But that was wrong. The album immediately opened up with a punky/sleazy fireball of high energy that is “How Can It Be Bad”.

Initially, I could see that the vocals supplied by Stian Krogh may not be well received by some. A bit hard to wrap my head around at first, by the second song I was loving it. I think Krogh‘s raspy almost U.D.O.-ish at points is perfectly suited to the punky Hard Rock of Pain City.

Aside from the punk influences, this album absolutely reeks of sweet riffage. There are so many tasty, infectious, chugging metal riffs littered all over When Life Gets You. Not to forget as well are the hooks that dig in deep riding on the catchy choruses. If your foot doesn’t tap you must already be deceased! The album is lengthy at fifteen tracks, thankfully nothing over 4.5 minutes and most under four. There are a couple of slower points throughout, but overall the album moves by well. A very pleasant surprise, thank-you random PR Company and of course PAIN CITY! 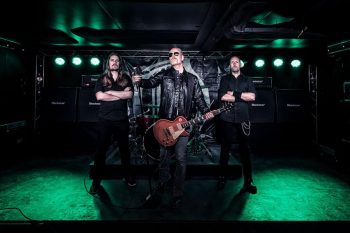 I’ve been able to discern through Facebook and the band’s website a little background info. You know, the stuff that was in the PR I deleted too hastily.  It seems that PAIN CITY – When Life Gets You actually appeared on the scene in March of 2018. I guess they recently joined a new PR company who re-sent the album out perhaps to create awareness for their second effort. Said second album slated for issue on January 25, 2019, and titled Keep It Real. Well, the marketing ploy worked. I’m now awaiting that release, but in the meantime the lead single/video is available. Watch it below.

Pain City began in 2016 and hail from Oslo, Norway. Created by vocalist/guitarist Stian Krogh, we also find drummer Petter Haukaas and bassist Morten Nilsen joining him. Follow them on Facebook…and, of course, if you like it…BUY IT!