Rehearsal One League Of Rock – A Band Is Born 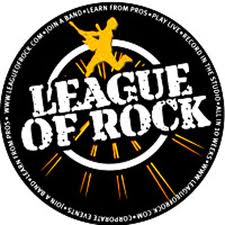 Before I get to the Rehearsal Factory and our first actual rehearsal, let me give you a brief recap of the past week….

When I got home from the J.A.B. (Join A Band) night, I got right to work looking at the songs that we were considering and was soon quite excited and also concerned. Was I going to be able to learn some of these songs? Rock n Roll is supposed to be fun but I do not want to let my band mates down and I am determined to play our songs to the best of my ability but I am no Geddy Lee on the bass.

The band and I used e-mail to bounce ideas around and issue our concerns with each other. We were also able to toss extra songs into the “consideration” pile and quite honestly remove a couple that we didn’t think we could pull together in our limited time frame.

As I mentioned in last week’s article, up until now I have practiced when I felt like it with no pressure or concern. Whether I learned a song properly or not didn’t really matter much but now I have to get it together because my band is depending on me. PRESSURE?!? Shit, isn’t that what work is for? So I spent my free time, bass in hand going over our short list and trying to piece these songs together. 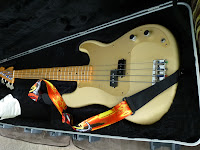 Wednesday finally arrived, I packed up my Fender Classic 50’s P Bass and headed out to the Rehearsal Factory. When I arrived, I found fellow guitar player John (Hooke) already in the waiting area and we exchanged small talk as we awaited our room to be ready. Now the last time I played in an actual band was back in High School. This was a few years ago. OK, OK This was a lot of years ago! Those practices were usually in my friend Adam’s attic our our drummer’s basement. I have never been to anything as cool as the Rehearsal Factory. 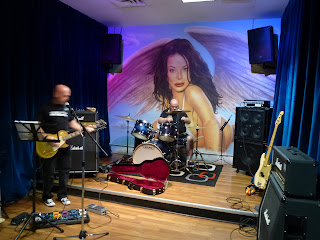 Soon LOR’s Robert “Bear” Vessmann assigned us our room and following John’s lead, I followed him in to see our home for the next three hours. Unpacking my gear I was thrilled to see the bass rig that I would be using and I did my best to set up pretending I knew what the hell I was doing. Cold beer and the rest of our band (Jim, Scott and Laurie) arrived and after a moment or two of tuning up and pouring some beer we got down to business.

First up we decided to take a look at the Cult’s Wildflower as we figured it would be one of our easier tunes to dig into. This was one of the songs that we added to our list later in the week and we played around with it for a bit, feeling each other out a bit and trying to piece it together playing the original on the Ipod.

It was around this time that our coach for the evening came in and introduced himself. Local Blues Guitarist Jake Chisolm, sat down and discussed with us who we were and looked at our song list. He seemed very genuine and so passionate about music and our song choices. Personally he made me feel very comfortable and yet challenged us all to aim big. He seemed very enthusiastic that we all seemed to be on the same page with our song choices and felt we had something special going on. He then went over to one of the other bands and we got back to work.

Running through “Wildflower” a couple more times felt good, and although I wouldn’t say tight or anything it was a start. What happened next was what I would refer to as “Magic”, we turned our attention to our next tune. Led Zeppelin’s “Whole Lotta Love”, one of the greatest tunes ever written. We dove in and right away it felt great and then Laurie transformed into “Rock Goddess”! I saw the look in John’s eyes and we all just smiled ear to ear. If I had to describe how it felt, it was like the first time I ever shot a birdie in golf. Magic is the only way I can describe it. Immediately we jumped into the next song AC DC’s “Whole Lotta Rosie” and again the knowing smiles between the band told us we were onto something good. This was going to be fun!

After that run through we started discussing a name for our group. Now just the day before it had looked as though John wasn’t going to be able to actually be part of our group due to some personal conflicts that were thankfully solved. He happily emailed us saying he was BACK asking us about the movie in which Jack Nicholson yelled through the axed door “Heeeeere’s Johnny!” The movie of course was The Shining, and quite simply Laurie threw out “The Shine”. Yeah, to me it invoked an image and a feeling. It was simple yet leaves it up to interpretation. Very rock n roll!

It was then that Jake re entered the room and we were certainly a different band. He was astonished that in the thirty minutes he was gone we played a couple of songs and come up with a band name to boot. With Jake as a captive audience we ran through both the Zeppelin and the AC/DC tunes a couple of times getting some advice from Jake. He once again said we were onto something special and spent some time helping John and Scott with the solo for Whole Lotta Love.

He bid us goodbye and once again we got back to work. Another run through or two of Wildflower and then we tried one of our other choices, Pearl Jam’s “Black”. A dark and driving melody we worked out the parts and pieced it together and it felt pretty good by the end as we jammed it out for an extended period. This song might be worked in as well.