“In the end one needs more courage to live than to kill himself.”
― Albert Camus

“If you’re gonna take on the world, fight like a girl.”

Ron Keel is a true American rock n roll survivor.  From his days in Nashville to his time on Sunset Strip to his recent work coming out of Sioux Falls, South Dakota and every stop in between.  His story serves as a handbook for up and coming musicians.  He’d want me to put a link to that book HERE

But I’m not here to write about that.  If you’d like to hear more about Ron’s amazingly almost 5 decade career in music HERE is a great place to start.  Shameless plug aside, when I heard Ron Keel was doing a solo acoustic show south of the Twin Cities I only had two questions.  When?  And what theater in a small town that doesn’t sell alcohol will I be driving to?

The Olde Pine Theater in Pine Island on Friday the 13th was the answer.  Seeing as how I drove 4 hours and battled food poisoning to see the Ron Keel Band earlier this summer, an hour drive to see him in a story tellers type setting was hardly a hurdle and definitely a must add item to my calendar.  So I packed my wife and sister into the Bakkruizer and headed to Pine Island.

The show was promoted by Uncontrolled Noize Radio and featured the opening acts Rebel Queens and the Overbites.  I’ve seen Ron acoustically before but not in a headline story teller format.  To sum it up, Ron tells an abridged chronological version of his story while playing songs from the time he’s discussing.  So it started with his time in Nashville where he had to play for tips just to have some money to buy a drink on his first birthday of being of legal drinking age.  He played the Bad Company song “Shooting Star” and it must have worked because in his words, he’s still drinking.

From there it was a journey through his career.  From Steeler to KEEL to Fair Game to his current band, the cleverly titled, Ron Keel Band.  Maybe you are taking Gene Simmons advice in your own way.  Ron told the stories behind the songs and then played an acoustic arrangement version.  And I don’t mind telling you he is a killer guitar player.  And his voice is as strong as ever.  Rocking through songs like “Tears of Fire”, “Somebody’s Waiting” and “Good Songs & Bad Times”, he closed the night with a rousing version of “The Right To Rock” which he oddly proclaimed earlier in the show that he wouldn’t be doing.  Not that anyone cared.  Lord knows I didn’t.  I found myself thinking, If I could tell the 15 year old me that 33 years later I’d be standing in a theater in Pine Island Minnesota shouting the chorus of the title track of KEEL’s seminal record… well I’d probably have a few follow up questions but Goddammit if that wasn’t a personal thrill for me.

One of the things that endears me to Ron isn’t his music.   It’s that he is one of the few artists of his era with a healthy dose of self-awareness.  I’m a proud cynic and I can promise you Ron is the real deal.  He continues to write music that comes from the heart and is genuinely grateful for all he has.  After the show he walked into the lobby and signed anything you handed him.  Took pictures with everyone.  And made an effort to make an authentic connection with anyone who wanted to pull his ear for a minute.  As amazing the show he put on was, I was almost more taken aback watching him interact with his fans.  Fans in a place that most GPS can’t find.  Kudos Ron.

I’ve written about Ron.  I’ve interviewed the man so many times he’s had to at least considered filing a restraining order.  So if I hadn’t convinced you to check out him and his music prior to this.  Hopefully I just did.  And you can find out all you need to at his website.  If you get a chance to see him perform solo or with the Ron Keel Band or even one of the rare Keel shows I implore you to do so. 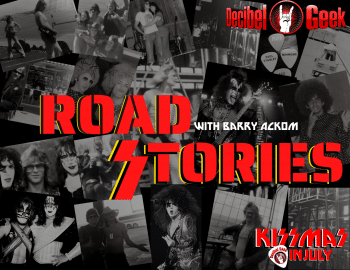 Former KISS guitar tech Barry Ackom joins us this week to share some incredible KISS Road Stories! Hired on to work for

We kick off KISSmas in July with a special KISS-themed version of The Quarantine Sessions! This week we’re joined by host of

You have to be among the haters not to acknowledge that KISS is responsible for all time great album covers.  While the non-makeup