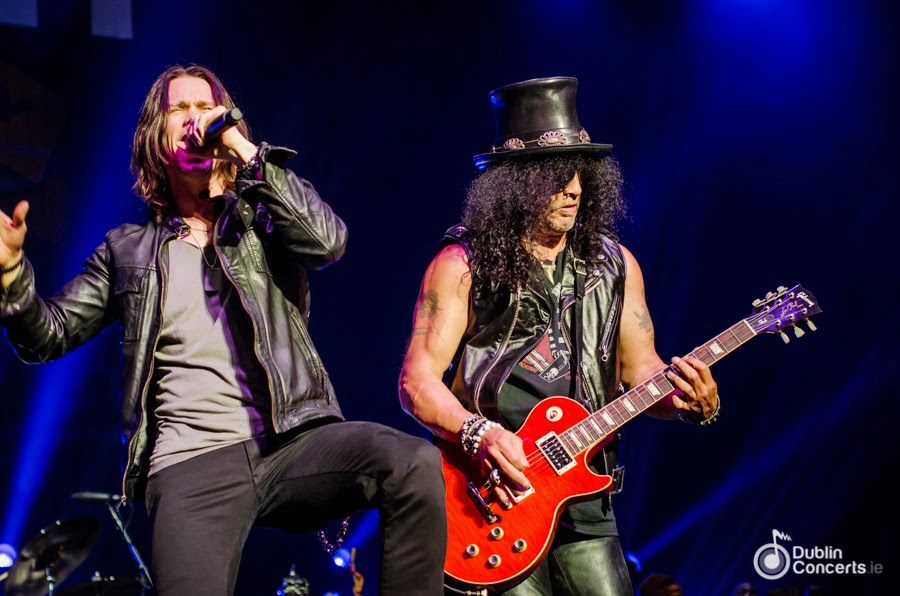 Last Monday I witnessed a phenomenon,14,000 people were miraculously cured of a life long bout of Monday blues.  A miserable, cold and rain sodden crowd, descended on the 3Arena, determined to have their spirits lifted.  At nine bells, miracle worker Slash arrived on stage, top hat perfectly placed and trademark Gibson guitar slung low.  Opener, You’re a Lie, from 2012’s Apocalyptic Love, got this old bus depot shaking,  before Guns ‘n’ Roses classic Nightrain, sends the crowd into pure delirium. Slashs’ right hand man, Myles Kennedy, immediately got the crowd on side with some slick interaction.

After a stonking version of Halo, new song Avalon, gets it’s live premiere, and is appreciated as much as the classics.  Being the opening night of the European tour, new album World on Fire gets a good airing.  Slash could be accused of using the Irish crowd as guinea pigs to test drive his new material, but this is a knowledgeable audience and they know their Slash.  Each new song is warmly welcomed, like a new member of the family.

Stone Blind, while not one of my favourite tracks, definitely works better in the flesh. Brent Fitz drum intro on You Could Be Mine, takes us back to the Use Your Illusion days.  It’s hard to believe this song is 23 years old, but Kennedy and The Conspirators barnstorming performance gives it a brand new coat of paint.  After Shots Fired, Kennedy gives his pipes a well deserved break.  Bassist Todd Kerns takes centre stage brilliantly.  Firstly on Doctor Alibi, a song originally recorded with Lemmy from Motorhead and then on another G ‘n’ R gem, You’re Crazy.  This guy clearly relishes being a leader, his arrogant, in your face, delivery brought the house down. 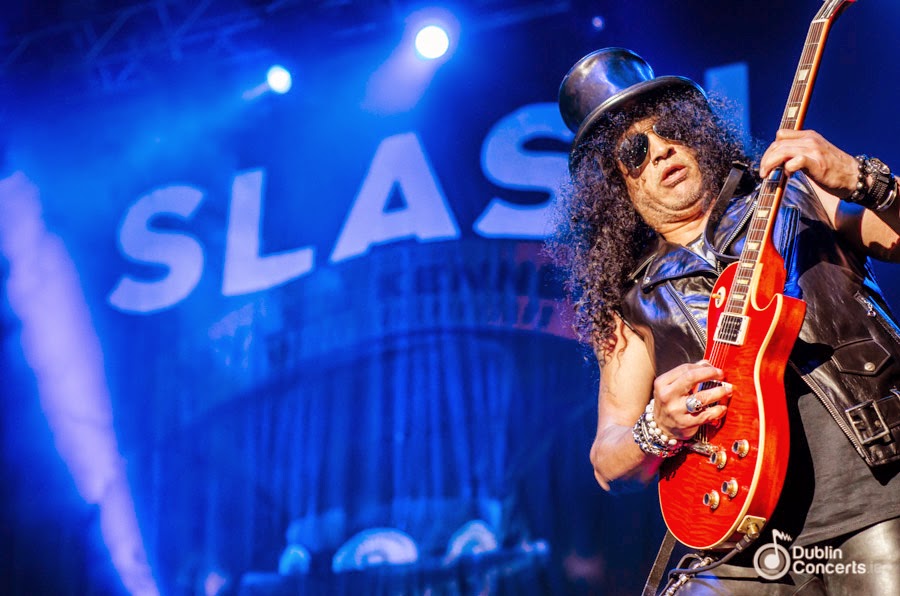 After a robust treble of Wicked Stone, 30 Years to Life and the exquisite doom laden, Beneath the Savage Sun, you sensed the crowd were itching for a classic.  If you don’t like long guitar solos, the chances are you made a dash to the bar during the iconic Rocket Queen.  Slash clocked up a near 14 minute solo, probably a little top heavy, but hey, this is his show.  The amazing Bent to Fly had the Slash faithful in raptures,before album title track World on Fire,brings the pace back up to a searing level.  The great man then slings on a double neck, and introduces Anastasia.  The haunting acoustic beginning slowly ascends to that memorable riff, Kennedy struts the stage with a contented grin.  It might be my imagination, but he seems more at ease in this set up than in Alter Bridge.

Then suddenly we’re back in 1987, Mr Hudson boards a raised platform, and the prominent chords of Sweet Child O’ Mine ring out around the arena.  The crowd swayed their hands in unison, couples embraced, an overwhelming nostalgic feeling gripped the Dublin faithful.  Velvet Revolver fans weren’t forgotten about, as couples let go to raise their fists to the menacing, creepy, but excellent, Slither.  Then for the motherfucker of all encores, the ground floor of the arena turned into a mass mosh pit, as Paradise City gives the crowd another nostalgic belt of pure classic rock.

I have never seen so many smart phones and designer eye wear flying through the air.  The songs manic finish featured two exploding confetti guns which only added to the madness.  A memorable way to finish a memorable evening.  Overall, a gripping, emotional and utterly mind blowing evening, with a man clearly on top form at the moment.  Backing band The Conspirators compliment him perfectly.

And what of Myles Kennedy, well the highest compliment I could probably pay him is that if the classic Guns ‘n’ Roses line up of Appetite for Destruction were to reform, minus the services of Mr Axl, then he would more than fill his boots.  Bar controversy, he wins on every level, especially vocally, where there is no contest.

Oh, and his timekeeping is impeccable.  Great night.