Slash Sets The World (And My Ears) On Fire 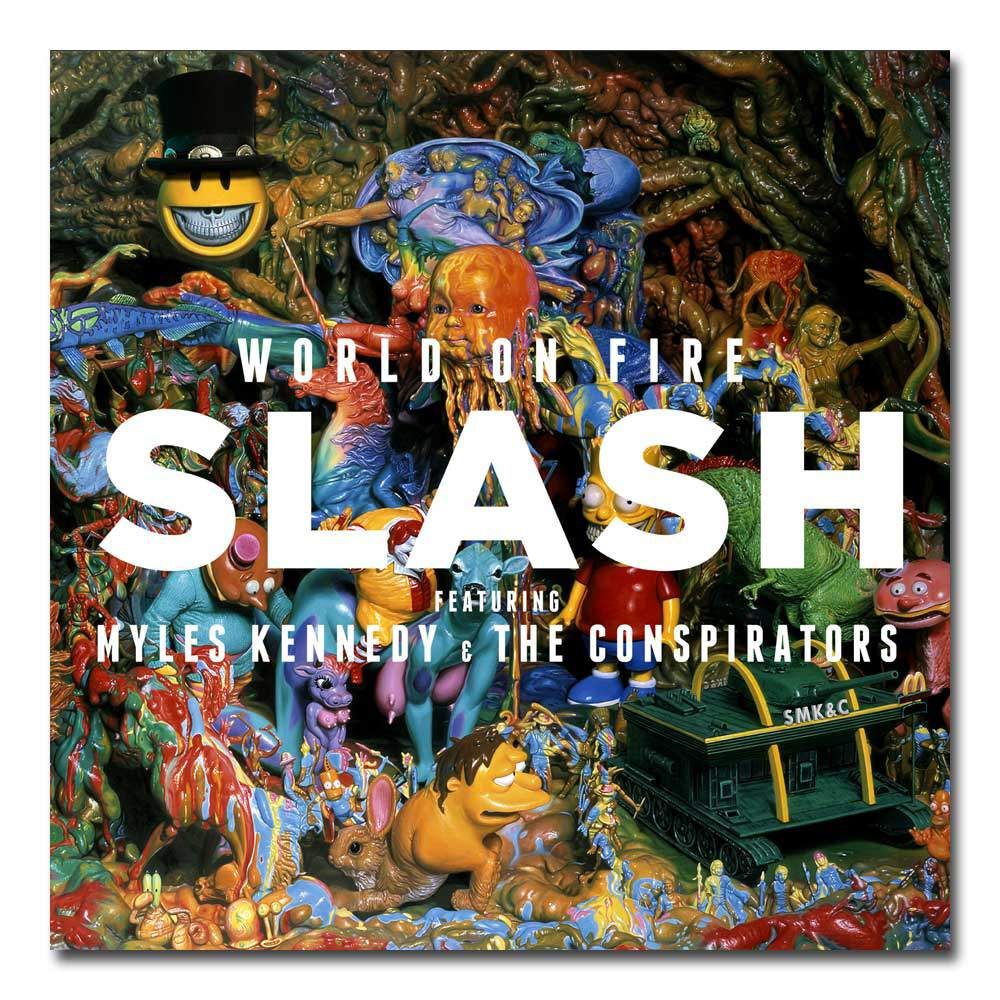 I really liked Slash’s first post Velvet Revolver solo album featuring a different singer on each track.  The only tracks I didn’t like were the two featuring Myles Kennedy.  I don’t like Myles Kennedy.  I don’t mean personally.  I don’t know the man and he’s crossed no line with me.  His voice makes me sad.  I didn’t like him in Alter Bridge but suffice it to say I was not the target audience for a re-purposed Creed.  So his sucking with that band didn’t phase me.  But his appearance on Slash was treading on my turf but it was only two songs.  But why was he the only singer on two tracks?  It was a harbinger.

Soon it was announced that Myles was going to be singer du jour for Slash and I died a little inside.  Outside of the track he did with Michael Jackson I have enjoyed everything Slash has done in his career.  Most junkies only dream of such success.  It felt like something was being taken away from me.  I listened to the follow up album, Apocalyptic Love… featuring Myles Kennedy (uggh) and there are some legitimate great songs on there.  But why Myles Kennedy?
Onto Slash’s latest release.  I mention the above as I felt it only fair to share my sociopathic neurosis when it comes to my dislike for Slash’s current singer.  I am going to try to make it through the whole record.  I have no delusion that my bias will find a way through any attempt to squash it.  Ergo I should acknowledge it.
The opening song is the first single and title track.  Starts out with a rippin’ riff .  Even a little cowbell.  I want to drive fast and slam a sixer.  And there it is.  Good melody I guess but I just don’t like his voice.  And could the lyrics be more nonsensical?  Damn.  Its still pretty good.
The next song, Shadow Life, starts with the clean guitar and that singing through a paper towel tube effect.  It takes the edge of ole Myles.  I like it.  And now it’s gone.  Again what fuck is this song about?  This bridge is giving my ear canal an aneurism.  He sounds like Ethel Mermem crossed with Daughtry.  Eh.  Next.
Automatic Overdrive.  Big intro.  Beer time.  Damn I love Slash’s writing.  And here comes Myles.  God, grant me the serenity to accept the things I cannot change.  My cat is making those “what the hell is this?” ears.  Best I can tell this is a poor metaphor for a horny chick.  Or a girl he’s worried might overdose?  It’s not really clear and the bridge isn’t helping clear it up.  Holy shit.  I’ve never been so happy to hear a guitar solo.
Wicked Stone.  Slash understands what Rock N Roll is.  This grooves.  Myles is trying to suck it all out but it’s standing tall.  Again, WHAT THE FUCK IS THIS SONG ABOUT?  If you turn it up loud enough it won’t matter.  Slash is a guitar God and if you know his story you know how unlikely that is.  This is a good song.
30 Years To Life.  Hmmm.  The vocals on the intro I actually like.  Then he starts singing normal.  This might be the best Slash record ever.  But Myles Kennedy won’t let it be.  The chorus only bothers me because his voice makes my cochlea suicidal.  Lyrically its a pretty blunt story about being in prison and not wanting to be there.  Whatever.  My tympanic membrane is crying for Advil.
Bent To Fly.  Another slow song.  Cool intro.  Great sound.  And a low key Myles.  I like this.  Ah but the closer he gets to the chorus the more Myles-y he gets.  From what I can tell he wants his mom to know he’s unique and has to do his own stupid shit and not the stupid shit the family wants him to do.
Stone Blind. Clean guitar again.  Low Myles vocal again.  And then it kicks in and Ethel Daughtry is in prime form.  I just pierced my ear with a non sterile needle hoping it will become infected and drown out the vocals.  From what I can tell the song is about a girl who, while a horrible person, is so hot he is blind to how she drowns puppies.  Boy that solo is rippin’ though.
Too Far Gone.  Gotta hand it to Slash.  Has he ever had a bad guitar tone?  But it’s the same story.  Good until Myles sings.  Considering his history with singers I’m pretty sure attitude, willing to show up on time and take orders has more to do with Myles Kennedy being Slash’s singer than his voice.  But what the fuck do I know.
That’s about all I can take.  I don’t see the point in repeating myself and I’m out of metaphors about ear pain.  Frankly if I take my Myles blinders off this record is pretty damn
good.  Musically, Slash is killing it.  He’s been “On Fire” for the last 5 years.  So if you like Slash and don’t feel like drowning puppies when you hear Myles Kennedy sing, you’ll probably like this.  And you should buy it.  From Amazon.  Use the Decibel Geek link.