There was some dividing and conquering of the Canadian Decibel Geek team for this trio of Lee Aaron shows in the southern Ontario area.  Photographer Brian Ronald attended the sold out London, Ontario show on Friday December 5th, 2014 and had rave reports for The Meister and photographer Shawn Irwin, who hit up Whitby’s December 6, 2014 show.  Here’s my (The Meister‘s) account of the Whitby event including a photo gallery from Shawn Irwin and a couple of The Meister‘s videos from the show. 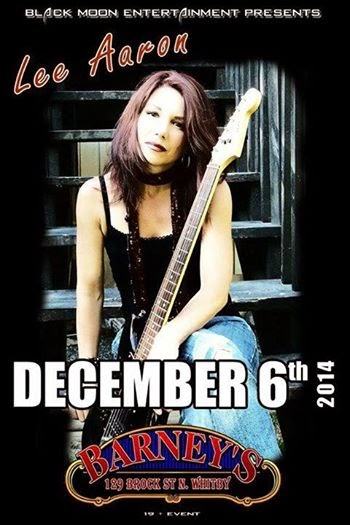 Our initial reaction to this new venue for us was at first less than positive.  There seemed to be a bit of a bottleneck just through the entrance doors as patrons collected behind the soundboard.  With a bar on the right side stretching the length of the venue and booth seating on the other, it made for a crowd in this area and poor vantage points for ones of challenged stature such as ourselves.  Once we pushed through, however, there was relatively no one on the floor area and this is really where you need to be for a rock/metal concert anyway.  I noticed that the only way on and off the stage was via stairs at the front and center, a poor design.  I can’t imagine trying to clear drums and equipment during set changes if this was a packed house with everyone crowding the front of the stage!  Other than that I loved the size of the venue, the balcony which would provide great views of the concert (but I’d rather be down in front!) and the sound was awesome.  I do hope that this venue succeeds, I’d definitely make the three-hour public transit trek there again to see a great live band.

It began to look a little like The Rockpile in here as we spotted a couple of our regular concert attending friends and even another random guy sporting a Rockpile t-shirt.  The opening band, Nail (featuring Cindy and Rainer Weichmann, once members of Helix), had a thick and heavy, rather industrial sort of sound and I’ll have to check into their music.  As we caught up with our Rockpile friends and met some new friends at the same time, Nail were wrapping up with their final song, a radio friendly track titled “Fuck Off and Die”.  It was actually about women getting out of a bad relationship, I believe, and was a great song with Cindy Weichmann‘s strong powerful vocals leading the charge.  At one point, she left the stage into the crowd (few people milling about) and stopped to sing in front of us, pushing me in the chest a couple of times as she sang the chorus.

Heavens Fire was up next and having seen them a couple of times before, I was looking forward to their show.  Actually they’re not using the Heavens Fire name at this time due to some internal legal band disputes to my understanding.    Darren James Smith (Harem Scarem/Warmachine/Red Dragon Cartel) was the former lead singer but he has moved on to front Jake E. Lee‘s Red Dragon Cartel and so Jesse Jack has stepped in to fill the void, and does so excellently I might add.  I noticed that the guitarist was different, JT Harris being absent, but this new guitarist did a fantastic job and had a great tone.  Perhaps Harris‘ absence has something to do with the use of the Heavens Fire name, at least that was the rumor going around.  In any case, Heavens Fire ripped through a spirited set comprised mostly of songs from the Judgement Day CD.  The original version of the CD featured Darren James Smith, but the band were passing out the re-recorded version at the show featuring Jesse Jack and titled Judgement Day A.D. (which I assume stands for After Darren?).

Drew Masters, editor of M.E.A.T. Magazine (a staple in my days of youth), bounded on to the stage bringing with him the lady of hour (or should I say “Lady of the Darkest Night”?).  After Drew‘s introduction and welcome to the stage Lee Aaron and her band, Sean Kelly (Guitar), Dave Reimer (bass), John Cody (drums and Aaron‘s husband) and Matt Weidinger (keyboards) ripped into “Hands On” from her 1989 release Bodyrock.  I was able to capture this opening track on video: “Hands On”. “Powerline” followed as everyone in the audience sang along with Canada’s “Metal Queen”.  During “Rock Candy” Aaron was sure to give some special attention to the gentleman in the front row at the foot of the steps as she came right up and sang directly to him.  Lee Aaron stole the hearts of men all over the world in 1984 and she’s still doing it today!  “Handcuffed to a Fence in Mississippi”, “Sweet Talk” and “Baby Go Round” all followed bringing us to a real treat for Lee Aaron fans.  Lee Aaron with guitarist Sean Kelly have been working on new music and she let us know that they are hoping to have the new album out by December 2015 at the latest.  They debuted “If You Don’t Love Me”, one of the new tracks and it went over extremely well from what I saw of the audience, both Decibel Geeks gave it “two thumbs up”.  “Some Girls Do” had the crowd rocking and saw Lee Aaron invite a young lady up on stage to join her for a few seconds of chorus singing.  Although I do appreciate many styles of music it’s the hard rocking that’s true to my heart and so, subsequently, the following selection of “I’d Love To” from Aaron‘s Jazz era was not a favorite for me.  “Odds of Love” took us to the emotional ballad “Barely Holding On” which Aaron struggled to promote and get played on Canadian radio upon its release back in 1986 she told us.  I marveled at just how strong and ridiculously powerful her voice was, “Barely Holding On” a complete showcase for these talents.  I readied the video camera once again and caught “Metal Queen”, a song that as I understand, Lee Aaron dropped from the setlist for a number of years.  But for me, that song alone was well worth the admission price, “Metal Queen”. Our friend from the Rockpile found himself being invited on stage for a few moments as Lee plucked his hat from his head to wear herself and quipped that she’d found Walter White in Whitby (prompted by our friend’s fashionable headgear).  “Watcha Do To My Body” wrapped up the set, but the crowd at Barney‘s in Whitby would have none of that!  Aaron and band were soon back to deliver a two-punch encore set.  Aaron invited two gentlemen concert goers from the crowd up on stage to be her “Go-Go dancers” for “Sex With Love”.  The guys looked to be having a lot of fun and “selfie” photos were being snapped all over as they danced, flanking the “Metal Queen” on either side.  “That was awesome!” one exclaimed as he exited the stage afterwards and I recalled that exact feeling when I was called up on stage to sing in the past with other bands.  “Bad Boyfriend” was the final song for the evening and Aaron announced that she would be over at her merchandise table to sign autographs and pose for photos after the set, so please come and say hi she invited.

Another excellent night of homegrown Canadian rock featuring some of the best performers Canada has to offer!