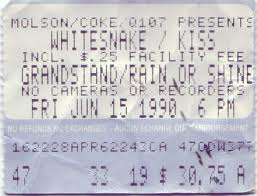 This is not one of those “who is the better singer?” threads. This really was Stanley vs. Coverdale.

Every Kiss show that I have seen has it’s own story. Some more memorable than others and one in particular that was both great and a little weird.

The summer of 1990, Kiss was out on the road bringing the Hot in the Shade Tour across North America. At the same time Whitesnake were also on the tour trail with an all-star lineup (Steve Vai had just joined), working the Slip of the Tongue album.

Apparently the tours were both going to reach Toronto on the same date. So instead of competing for many of the same fans, somebody came up with the amazing idea to combine the tours into one huge metal show at the CNE stadium. This was going to be the concert of the summer for the Canadian metal fans.

June 15th, 1990 a beautiful summer day and thousands of metalheads headed to Toronto for what would be a memorable concert.

Slaughter and Faster Pussycat tore up the stage under the hot sun and they both were well received by the anxious crowd. Now I knew that the show was billed as Whitesnake featuring Kiss so I fully realized that Kiss would be going on first. What I didn’t realize was what was about to transpire. 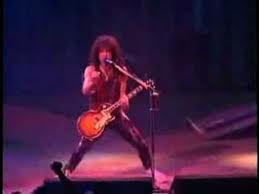 We lucked out and had 3rd row center seats, right up front. With me at the show was my good friend Andrew, who up to this point was still a Kiss virgin. As Faster Pussycat left the stage I assumed the curtain would be lowered to hide the set change as Kiss were about to set things on fire.

As the stage crew raced around onstage I was a little perplexed as they openly created a stripped down basic stage with some amps. What the hell was this? Not exactly the “Leon” Sphinx stage that I had heard all about. This was all we were getting? This is what my buddy’s first Kiss show was to be?

I shouldn’t have been worried because Kiss strapped on their guitars and took to the stage with an intensity that I had not remembered from them ever. KISS owned that stage, Gene and especially Paul seemed possessed with an electric energy that was about to explode. 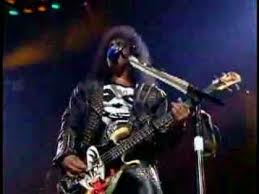 At this point David Coverdale approached the side stage to flip Paul Stanley the bird. The majority of the audience couldn’t see this, but at third row center we witnessed the “bird” take flight and the angry glance that Paul fired back.

Again the crowd erupted chanting Kiss!, Kiss!, Kiss!
They soldiered on playing a great set with a full compliment of encores. Kiss seemed to be throwing down a leather studded gauntlet. Without the effects, and pyro and much of what makes a Kiss show so special, they went on stage and simply destroyed! It may have been the best Kiss show musically that I have ever experienced.

After the set, they walked off stage and we could see some commotion taking place. We heard “unconfirmed” reports that Paul and David Coverdale exchanged words as Kiss were leaving the stage that erupted into some brief fisticuffs with crew members separating the two singers. Not sure if that was exactly what we were seeing but something definitely went down at sidestage.

As the set was being switched up for the night’s headliner, my buddy told me to turn around. When I looked back I couldn’t believe it as thousands of people were heading for the exit. I was pretty stunned but as a Kiss fan I was also a little proud. The fans were sending a pretty clear message to Mr. Coverdale. 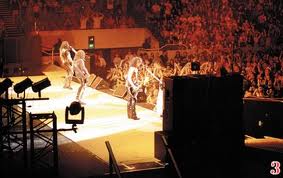 Whitesnake hit the stage and put on a decent show. There is no doubt they are a great, legendary band. The Slip of the Tongue lineup had no shortage of talent and anytime Steve Vai attacks the six string (or sometimes 7 string)it’s worth a listen. The band were solid and I was enjoying the music.

Then instead of just going out and delivering the best show he could, Mr. Coverdale decided to open his mouth and make matters worse. He proceeded to let the crowd know that he felt the opening band tonight were a bunch of whiners. I will tell you, you could have heard a pin drop for a few moments. My jaw was on the ground as the insults started to be shouted at him followed by a wave of boos.

And the people again started filing out of the stadium. I had to smile because after that statement, every time he went to the mic to say something the boos could be heard. By the time they wrapped up their set the stadium was only half full.

It must have been quite a night for David with a lesson learned the hard way. It’s not wise to Fu*k with the Kiss Army.