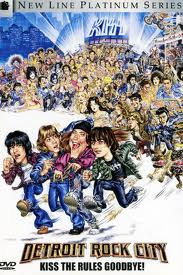 After the hugely successful Reunion tour, Kiss were absolutely everywhere. Striking while the iron was still hot, they recorded Psycho Circus, planned out the new tour and also had their hand firmly in the production of the movie “Detroit Rock City”.

The movie was largely filmed in and around Toronto, the outside shots of Cobo Hall was actually Toronto’s CNE stadium. Concert footage for the movie’s finale was shot at Hamilton’s Copps Coliseum. The poster’s around town were calling out for extras to be filmed for the big concert scene. A chance to see Kiss for free? Hell Yeah! I was going.

At this time I had recently moved to Toronto and took my wife and brother to the 3D Psycho Circus show at Toronto’s Skydome (now called the Rogers Center). The very next day my brother and I headed off to Hamilton to become part of the KISS movie!

We stood around in the cattle call lineup for a couple hours before being let into the arena. It was very cool to see the LOVE GUN stage set and we found a  spot about 6 or 7 rows from the stage.

At this point a Kiss tribute act (Alive from London Ontario if I am not mistaken) came out to do dress rehearsal. Detroit Rock City came blasting from the sound system as the band lip synched and pretended to be Kiss. This was then repeated 6 or 7 more times. 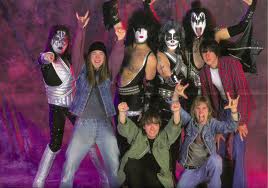 By this time we had been standing there for about 4 hours and have heard Detroit Rock City a half dozen times. Finally Kiss emerge onstage and we go nuts. This is now kinda cool as they get instructions from the director and they do 4 or 5 run throughs, once again synching to the song Detroit Rock City.

By now it’s approaching 11pm, we have been standing there for 10 hours. Now it’s time to shoot the individual member shots.

Watching Peter throw his drumstick to the crowd over and over again was tremendously exciting (sarcasm mode now off) but it was Gene’s fire breathing scene that turned out to be quite the shot.
If you watch the scene you have a view from above as Gene blows the fireball right into the camera. It came off very cool but was quite a shot to make happen.

To set the scene, they put a step ladder on stage and a camera man climbs the ladder and covers himself in a large fire proof blanket. Gene takes the stage and  they run through the shot 3 or 4 times (keep in mind this takes about 45 minutes) without the actual fire and then it’s “action” time. Everyone takes their places and Gene takes a big mouth full of his “kerosene” and they start rolling. Torch in hand he is just about go and you hear the sound of the camera running out of film (wap wap wap wap wap!) CUT! screams Adam Rifkin and poor Gene is still standing there with his mouth full looking a little annoyed. That delays things for another hour before they were ready to shoot again. This time it goes off without a hitch. 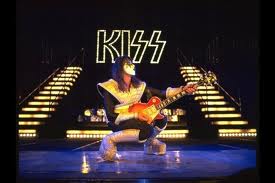 Last shot was the scene that seems to be a view from inside Gene’s mouth. Shot using a large muppet like mouth and tongue prop. The camera mounted inside the mouth, as the puppet guy controlled the tongue. I remember they kept brushing the tongue with some kind of liquid to keep it looking wet as they recorded the scene. Interesting? Yes, but by now it was 3:30am and we had heard Detroit Rock City at least 75 times and I just wanted to go home.

So in total we stood there for over 13 hours, heard one song way too many times and learned that being an extra is not a big amount of fun. I did however get to meet Edward Furlong of Terminator fame and I also caught one of Ace Frehley’s guitar pics!

It was cool being part of Kisstory and no you can’t see me in the film but I can’t say that I would run out to repeat the experience. If I never heard Detroit Rock City ever again that would be ok too!