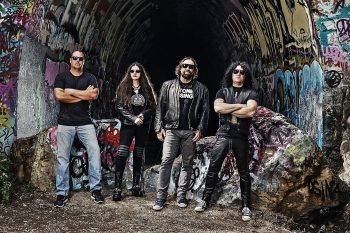 A friend gives you a CD and says “check out my new band”. Always unsure what to expect when you have a personal relationship with a band. A little nerve-wracking to be honest. I mean what if I hate the album? How do you tell them that? I’d never lie in a review, I just don’t review it usually! So by that, you can discern already my thoughts on STONE RISING – Stone Rising :).

STONE RISING – Who Are They?

Stone Rising has been around in some form or other since 2009. The band is based in Australia’s Gold Coast and features Greasy Belcher (vocals), Rowie Riot (guitar), Shar Roxxon (bass) and Dave Cram (drums). If you heard CGCM Podcast Episode #66 – Around the World in 80 Episodes Australia, you may recall me talking of my friends, the former guitarists in Kings Of The Sun. In June they dropped their self-titled debut independently. This CD contains a “compilation of their jamming works over the past years with an overhaul of the tracks and more recent songs written in 2018.”

Billing themselves as “Dirty Australian Rock”, they are a hard-hitting rock band committed to bringing Aussie rock to the world. Their fusion of blues and hard rock deliver a style that will ream your ears with riffola. Yes, that’s direct from their website and Facebook page – “ream your ears with riffola”. Sounds like the Ole Meister‘s cup of tea! 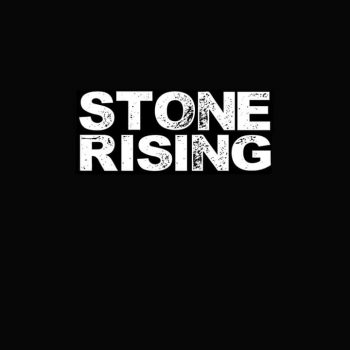 Right from the first notes, it starts off like an exploding hand grenade! The force of punk ‘n’ roll stylings of the first cut, “Waco City Blues”, prove that Stone Rising does not intend on taking prisoners! The gritty, gravely voice as Greasy delivers the lyrics works fantastically alongside the venom of the riffage. And Shar‘s (assumably) vocal cameo appearances in the background adds a nice flavour. As Greasy shouts “C‘mon yeah” Rowie delivers a tastefully impressive solo. The chorus is riff charging heaviness, but the verses taper back to let Greasy in the forefront. Fucking awesome start!

The pumping groove of “Like a 45” does not let off the gas at all and the venom of “Hell Yeah” drives it even harder into the pocket. “Beaten Track” has a heavy swagger to it as it thunders along. Next up is “Little to the Left” which battles against “Waco City Blues” for my favourite track on the record. It features some riffy grooves and truly tasty guitar tones. Actually, throughout all tracks, Rowie‘s guitar tone is an entity all it’s own. Love it!

Without mentioning each and every track, I will say that “Party With The Band” is short and sweet…and I actually have partied with the band. In fact, I was assaulted by Rowie and thrown to the ground!

With one exception, all tracks run between 2:00 and 3:45. So they hit you hard and fast, leaving nothing behind. The exception is the final cut on the record, “Long Hard Road”, at 8:16. Now, anyone who knows me is fully aware of my insatiable love of ballads (hate those fucking things). Musically, Stone Rising is capable here, I just don’t prefer the style. Nice to hear Shar‘s vocal tones getting the limelight though. 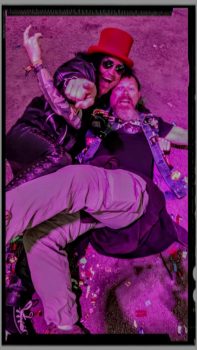 Let’s make a couple of things crystal clear here. I love Stone Rising‘s debut album! I do not give it a good report because they are my friends, but because I genuinely love the music.

Not being a particularly lyrical listener myself, I do understand that all of the tracks are based on band members experiences and feelings during real events of their lives. Hmmm, wonder if “Party With The Band” is about that night at Sweden Rock…lol.