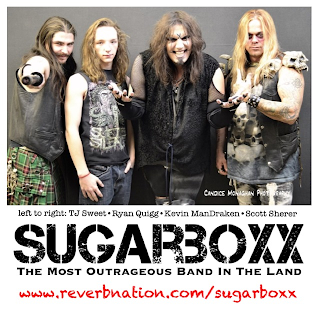 A few months ago I joined the modern world and opened a twitter account. Started following a few celebs, minus them Kardashian chics, and Bieber kid. I started following a man, Kevin ManDraken and his band, SugarBoxx. Born the son of a preacher, it was his mother, who was a fan of the Beatles and Elvis that would ignite the spark of music in young Kevin. She was the one who bought him his first guitar.

Don’t be fooled by the name. These guys are not your average band. These guys know how to rock and they know how to put on a show. Formed in 2010, originally  started as a 80’s cover band. “I wanted a heavier sound,” ManDraken recalled. So ManDraken set out through Ohio to find those that shared his musical vision. 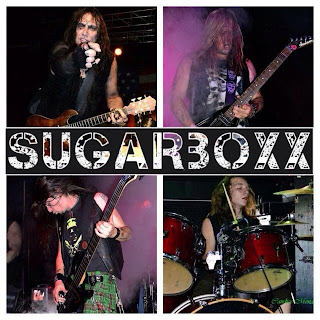 ManDraken recruited Scott Sherer (guitar), T.J. Sweet (bass) Dave Kesling (drums) to carry out his vision of mayhem and debauchery. Their first gig, however, said otherwise. “Our first gig was a local show. Not too many people were there,” ManDraken recalled. ManDraken wanted a way to get those in the audience talking about the band, sort of a parting gift sort of and for this ManDraken drew inspiration from a local by the name of Marilyn Manson. ‘I wanted to dip the bible I was using into fake blood, but the blood kept running off. So, I took the pages, ripped them out and made a cup out of them,dipped them in the bucket and drank the blood,”ManDraken recalled. The act, not only got people talking, but got some feathers ruffled also. Local clergy was not amused with the act. Many threatened protesting and boycotting of the shows, but ManDraken and the BOXX carried on.

The band went from playing to a few to bringing crowds. People wanted to see the man and the band that rocked and gave a little bit of a Alice Cooper meets Blackie Lawless feel to their shows. With the crowds came protests. Feminist groups also protested the shows due to the image they felt SugarBoxx was portraying for women. The guys, however took it in stride.

2011 brought a line up change. Out was drummer Dave Kesling, and in was a 17 yr old phenom Ryan  Quigg, the son of the group’s photographer. “We were doing a local show when Ryan’s mom was there taking pictures. She mentioned her son was a drummer. When it came time to look for another drummer, she mentioned it again, and just so happened she had a tape of him playing. He auditioned, and he was in,”ManDraken recalled. When asked about his young drummer and how it’s working out, ManDraken ‘s voice beams with excitement. ” It was like we won the lotto. He’s a phenom. Ryan’s got a bright future  ahead of himself. He’s going to Georgia this summer for drum camp. He can play anything on the drums. It was like he gave us back our enthusiasm.” 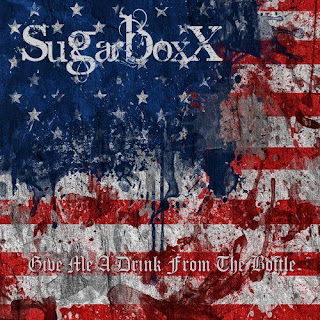 Like all bands, SugarBoxx has their own legion of followers, or BoxxHeads, as they are called. They follow the band from show to show, and their numbers are growing by the show. And the band has big plans leading them into the hot summer months. Their awaited E.P. is in final process now, set to be released either May or June. Their first single off that E.P. ‘Monster’ is set to be released May 7th.
“In July, we’re planning on filming one of our concerts to help spread who we are,” ManDraken said.
As we were coming to the close of our interview I asked what, if anything he could or would like to tell those faithful that come to see SugarBoxx play live, sometimes braving the snow (as we all know, spring no longer is a season, it’s a myth).

“Thank you. If it wasn’t for them, we couldn’t do what we do. We love what we do, I love what I do”.
SugarBoxx can be found on reverbnation.com. There you can get all their latest songs, show info and even booking info. The band even has a Facebook, yes they do. Just type in SugarrBoxx and click like. Or, if Facebook isn’t what you care to use, the guys can be located on twitter, under SugarBoxx.