There’s a new Festival in town and it’s called Swedish AOR Convention. The event, captained by Johan Nylen (Dr. AOR), is specialized to the AOR genre and includes vendors, meet & greets and more. CGCM Podcast co-host/writer Rich “The Meister” Dillon was on hand to check out this first-year event.

Swedish AOR Convention is already announced for year #2 in 2020!

Swedish AOR Convention began in a small venue in the Lilla Torg area of Malmö called Folk A Rock. The coffee shop cafe featured a small stage and a record/CD shop upstairs. Coincidentally I’ve previously shopped at said record store! Spirits were high and the atmosphere was electrically tangible. I greeted friends from around the world and watched Hank Erix signing a fan’s CDs. Organizer Johan Nylen kicked off the music with a short little monologue in which he welcomed everyone and announced that the CD store upstairs offering 15% off for AOR customers.

Phillip Lindstrand took stage around 6:15 pm with his drummer, Michael Odegarden, and, thankfully for me at least, he was not acoustic. He delivered a rocking little set, so wild in fact that he busted a string during the fourth song. Announcing that he was going all hardcore for the final song that he dedicated to Johan Nylen, Phillip wrapped up his engaging set. I noticed during the set that Lindstrand spent a lot of time looking off into space. I later learned that he has some sight issues.

Hank Erix from the band Houston, took stage next and even though acoustic really won me over. His appearance does not suggest the deliciously melodic vocals he possesses. The enlightening stories he told between songs included Johan Nylen being the first one to ever give him an artist pass as a performer. Inviting Phillip and his drummer on stage, the trio closed out with some cover songs that had us all singing along. It was clear to see that the performers, as well as the crowd, was having a great time as smiles and laughter perpetrated the whole evening. Watch for Hank Erix to join us for a CGCM Podcast Episode in the future.

After Johan spoke a few closing words several of the crowd and organizers drifted to a nearby bar for drinks not wanting to go home just yet.

The second night of Swedish AOR Convention took place at the KB (Kulturbolaget) venue in Malmö. After a day spent record shopping around the city with a couple of friends and more hours than should have been on a patio with cold beers, we watched Pretty Wild kick some ass.

As the only live act on today’s events that included vinyl vendors, meet and greets, and a live radio show from ARFM‘s Steve Price, they took stage at 10 pm for 40minutes. Serving as the launch party for their new album Interstate 13, Pretty Wild were much heavier sounding than the recording. Their more sleaze/glam than AOR output is right in my listening wheelhouse and the assault had the AOR crowd’s legs tapping and fists thrust high in the air.

Although I expected a longer than 40-minute show, Pretty Wild were impressive, to say the least. After the set, a good portion of the attendees including last night’s performer Hank Erix and AOR staff drifted over to the nearby Mill Hotel. Drinks, music chats, and impromptu acoustic gigs kept the mood high late into the night. Another awesome day at Swedish AOR Convention 2019 filled with good friends who are more of a family.

Saturday, June 01, 2019 was the first full day at Swedish AOR Convention. Held again in the Kulturbolaget venue, things got underway with Shape of the New Sun. While decent, they didn’t overly draw me in, but many fans raved about this opening band. So, I will dive further into their music and see if I just missed something in concert which can sometimes happen greeting friends, etc.

Up next, Osukaru, who I’ve heard a lot about but not super familiar with their music, won me over quickly. They put on a great and engaging show that at the end saw me with the setlist, guitar pics, and pin-on buttons. Another friend in attendance liked them so much he purchased all five of their CDs that were available! Definitely a band I will be looking into more…maybe an AOR podcast episode with them, Hank Erix and more is a good idea.

Then we were treated to Age of Reflection who were another amazing band. Unfamiliar prior to this, it was easy to see why there seemed to be quite a few Age of Reflection t-shirts circulating the crowd. During the set, the band filmed two new songs, perhaps for an upcoming DVD, but I will be watching to see if I make the cut on video…lol. Another band I’d better get listening to and soon!

Unfortunately, I got lost during Coastland Ride as they didn’t overly hold my attention. This is in no way to detract from the band as evidenced by several fans, they just didn’t appeal as much to me personally.

Headliners Bad Habit (Sweden) were the right choice to close down this first full day of bands. This band possessed more familiarity to me having delivered a successful acoustic set at last year’s MRF Sweden. Their full electric set was nothing short of amazing. While unfamiliar with the songs per se, the set was decidedly upbeat and engaging. The show, including a lengthy encore set, entertained the sizeable audience for better than an hour chock full of plenty of audience interaction. It’s easy to create that atmosphere and connection between band and audience when it’s clear the performers are truly enjoying themselves.

Bad Habit (Sweden) is re-issuing/recording their debut album, After Hours, but you can read Trevor‘s review of the original here: Bad Habit – After Hours (Classic Review).

Met many “friend” surprises as folks from around the world popped up that I had no idea were coming. Also, some new friends made and as a whole the spirits were high. Again after the day’s events many of us conglomerated in the bar area of the nearby Mill Hotel for drinks. And again the Swedish AOR family delivered a great day. I wish this could go on forever!

Sunday saw another full contingent of bands, but unfortunately, I could not attend. Even while traveling, sometimes things happen and when a friend is in need I will always answer that call. However, my good friend Neil was in attendance and all reports show it was another banner day. For him especially as he got to meet special guest Anette Olzon, who appeared with Sapphire Eyes. 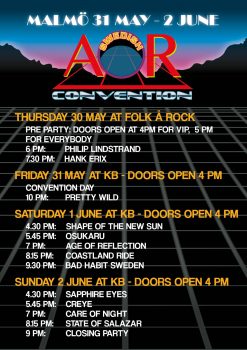 One of the best things to do at an event like this is to connect with fellow fans and bloggers. I met a fantastic individual in Andy Nathan who writes for Get Ready to Rock. He published a great article on the whole festival including the Sunday that I missed. Here is the link to his work on the Get Ready to Rock website: Swedish AOR Convention

Swedish AOR Convention may not have sold out. Indeed it may not have been a “big draw” Festival. But what it was was a family. The folks there from even as far away as Korea and Japan are rabid AOR/Melodic Rock fans. As someone who personally prefers a little more heaviness to his music, each and everyone that I met welcomed me with open arms and sometimes beers! Already announced for 2020, is Swedish AOR Convention 2. Based on the success of this year’s event I think 2020 will be even better. Who’ll join me?