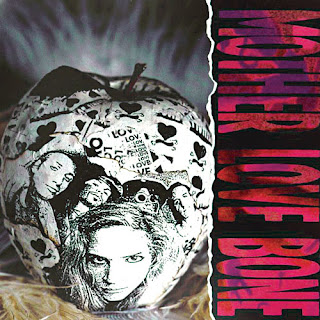 As the story goes Greg Gilmore, drummer for Seattle punk band Ten Minute Warning, moved to L.A. with the band’s bass player, Duff McKagan, when Ten Minute Warning broke up. Thus Gilmore was present when Guns N’ Roses formed, but rather than join the band he moved back to Seattle and watched from there as Guns N’ Roses became the biggest band in the world. Gilmore soon found himself playing with an up and coming Seattle band called Mother Love Bone. When that band’s singer, Andrew Wood, died from an overdose just weeks before their major label debut was to be released Gilmore passed on the opportunity to join fellow Mother Love Bone members Jeff Ament and Stone Gossard in their next project, only to watch that band, Pearl Jam, take Guns N’ Roses place as the biggest band in the world. Gilmore was present for the inception of both bands and probably could have been the drummer in either band. So it goes. 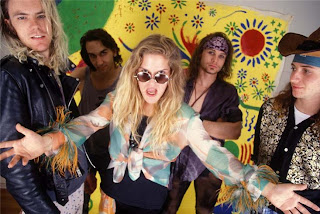 Mother Love Bone were a sort of Seattle supergroup. You had three former members of Green River (one of the original Sub Pop bands), the singer from Malfunkshun, and the drummer from Ten Minute Warning. My introduction to Mother Love Bone came from the pages of Metal Edge magazine, which I read religiously at the time. I knew about pretty much every metal band before they even had a record out, and would usually buy the albums (on cassette, unfortunately) the day they were released. It took me ten or fifteen minutes to ride my bike to a store called Mainstream, and I did so every Tuesday to spend my ten dollar allowance. I’d usually go straight to the shelf where they displayed new releases. Somehow I missed out on Mother Love Bone’s debut EP at the time, only scooping it up years later on used vinyl (shit, I think I sold that on eBay at some point). Before Mother Love Bone’s full length debut even hit the stores I read about Andrew Wood’s tragic death in those same pages of Metal Edge. When the album, Apple, was finally released, affixed with a ridiculous Parental Advisory sticker, it was hard to find. Mainstream didn’t have it and I can still remember the day I happened upon the cassette at a store called Radio Doctors. I would later buy a Mother Love Bone t-shirt at that same store, which I eventually sold on eBay as well. Mother Love Bone looked like the other bands in Metal Edge but they didn’t quite sound like them, mostly due to Andrew Wood’s larger than life personality and stream of consciousness, mostly nonsense lyrics. Wood loved words, and used them liberally. I liked Apple at the time, but Mother Love Bone did not become one of my favorite bands. I still hold on to the bitter regret of knowing that I missed seeing them open for Dogs D’Amour, another band I now love, in Milwaukee at some point, but I wasn’t even old enough to drive to the show, so…

Obviously Mercury Records had high hopes for Mother Love Bone, they even gave them their own subsidiary label, Stardog Records. Apple was produced by Terry Date, who had produced Soundgarden’s major label debut, Louder Than Love, the previous year. The record sounded great. I love the opening track, “This Is Shangri-La.”

“Holy Roller” and “Heartshine” are my other two favorites on the record.
The album also contained a very interesting piano ballad called “Man of Golden Words,” which is basically an Andrew Wood solo performance. The song serves as a sort of self-penned theme song for the charismatic frontman. This is also the song from which Temple of the Dog, a band that was formed by Chris Cornell as a tribute to Andrew Wood, took its name.
The last song on the album, a moving, epic ballad called “Crown of Thorns,” is the only song from the debut EP that made it onto the album and it’s even better here. I’d have to say it is the best piece of work the band created. 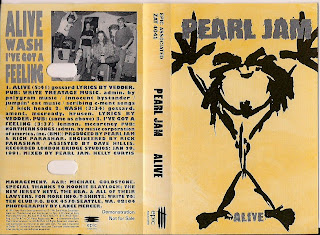 A year or so after Apple was released a friend and I were at a store called The Metal Shop in Milwaukee when we happened upon a stack of free promo cassettes. The band was called Pearl Jam. I think it was my friend who said, “Oh yeah, those are the guys from Mother Love Bone.” We popped the free tape in the car stereo as soon as we left the store. There were three songs on the cassette. We were very intrigued by the first song, “Alive,” but not so enamored with the other two (a boring tune called “Wash” and a cover of “I’ve Got a Feeling” by the Beatles). Back home I kept playing that first song, “Alive,” over and over and it really grew on me. In fact, I became obsessed with it and bought the band’s album, Ten, as soon as it came out. Pearl Jam were my new favorite band for awhile. I even sent away to join their fan club and they sent me a free seven inch at Christmastime. I ordered a cool black t-shirt from the photocopied catalogue they sent me with the “Alive” stick figure on the front and what looked like a set list duct-taped to the back. I wore it to school and everyone kept asking me “What the hell is a Pearl Jam?”

Huh, what ever happened to those guys?