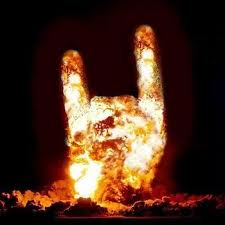 It’s interesting how tastes change and grow over the years. As a young teenager discovering the world of hard rock and heavy metal my tastes leaned towards the “hair” metal variety. I preferred melody with my metal and yes that would even include the sugary pop sounds of old Bon Jovi (back when he had long hair they were considered metal!) Say what you want about Bon Jovi but their first three records were solid as hell  and they put on a hell of a live show.

My first introduction into a darker “thrash?” metal happened by accident and at the time was not welcomed. It was a usual Saturday afternoon when I was 14 years old. I finished collecting my paper route money and headed to the record store for a new piece of metal for my collection. My library of Kiss, Motley Crue, Def Leppard needed broadening and I spent over an hour flipping through the records trying to decide who would be next.

I narrowed the selections down to two, Iron Maiden’s Killers or Venom’s At War with Satan. Now remember I had never heard either album so the album cover and song titles were all I had to make this decision. My buddy made it easier as he was planning to get the Maiden album in a couple of weeks so I decided to try the Venom out. I quickly raced home to hear my newest metal discovery. 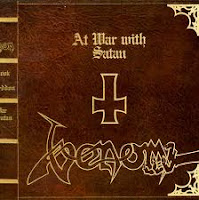 Wow, was I disappointed. What a horrible mess of distorted noise with zero sign of melody or song structure. All I could think about was the Iron Maiden album I didn’t choose and that I was stuck with this piece of crap.

As the 80’s progressed I was aware of the rumblings of the thrash movement growing out of the Bay area. Venom, however had sealed their fate and I judged the entire genre on side one of “At War with Satan”. Unfair? Yeah probably but with limited cash I was sticking to the more radio friendly sounds of the hair and classic rock bands.

I had one buddy of mine who’s tastes ran a little heavier than mine. Andrew tried many times to lure me to the dark side of Metallica, Megadeth, Anthrax, Exodus and Slayer. He had quite battle because I was having none of it.

Then it happened, the CNE Stadium was hosting a summer concert that featured Aerosmith, Metallica, Warrant and the BlackCrowes. As a huge Aerosmith fan I wasn’t about to miss this show. My persuasive friend was. going away and was unable to join me for the concert and instead dropped off all his Metallica CD’s in case I wanted.  to become familiar. with them. Yeah like that was ever going to happen. 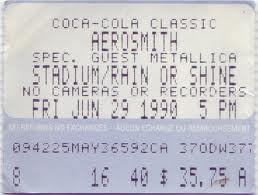 His Cd’s sat on my dresser and off I  went to see Mr. Tyler and the boys.  I remember this show like it was yesterday, a sunny summer day, the Black Crowes had just released Shake Your Moneymaker and put on a decent little set to a half empty stadium. Warrant hit the stage and were really good. Jani Lane jumped into the crowd ran halfway up the stairs getting the crowd going. Uncle Tom’s Cabin never sounded heavier.

And then it happened, the moment I became a thrash fan. Well not exactly but the moment I became a Metallica fan, absolutely! From what I have read, Metallica at this point were recording the Black album and were going a little stir crazy in the studio so they booked a few shows to break the monotony. I was lucky that Toronto was one of these boredom busting shows.

They hit the stage to a rabid, electric audience and they tore it up! I have never been won over so quickly and completely as I chanted “Die Die Die” with everyone during Creeping Death. It was like a light had been turned on, I got it, I understood what Metallica was all about and I was along for the ride. A new Metallica T-shirt was worn home, not a new Aerosmith T (Sorry Mr. Tyler).

At home I grabbed the previously ignored Metallica Cd’s and recorded them all. Soon my my mind was opening up to Megadeth, then Anthrax, then Testament, then well you get the idea. Thrash was no longer trash in my books. That said, my thrash still needs some melody and some song structure and preferably a singer that can carry a tune. Slayer for the most part, remained a touch too heavy for my taste. 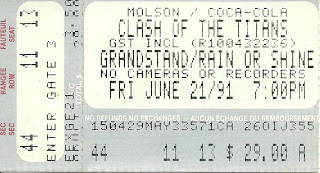 The Clash of the Titans tour rolled into Toronto featuring Megadeth, Anthrax, Slayer and opening act Alice in Chains (who at this point were being marketed as a metal band) Although still not into Slayer, I was all in for the others.

Alice in Chains didn’t go over so well, in fact I remember the singer lashing out at the audience for not getting into it. Honestly I can’t really remember what I thought of their set.Anthrax and Megadeth played killer sets. Anthrax was a lot of fun, very loose and animated onstage. Megadeth were killer serious ripping through their set meticulously precise.

Now, as previously mentioned Slayer was (and with the exception of a few tunes still is) a little too heavy for my taste. That said, we stayed to watch and as the house lights went out IT happened. The red stage lights and the special effect smoke created the mood and as Slayer hit the stage I could see it starting. A small hole in the floor was opening up. 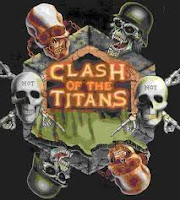 Over the next few minutes this circle grew bigger and bigger as the chairs from the floor were tossed aside. From the safety and security of the stands it truly looked like a whirlpool swirling and growing. The red lights and the smoke from the stage gave this cyclone a real evil look to it and I stood there with my jaw on the floor. It actually reminded me of the Doppler radar they show during a hurricane. THE BIG RED PIT of thrashing mtealheads was an intense, violent sea of aggression that was almost as interesting to watch as the band onstage.

My jump into the “thrash” pool was a slow one but I truly enjoy much of the genre. The “cookie monster” vocals still don’t work for me but there is a lot of good stuff out there. Five Finger Death Punch being on
e of the newer bands I am really getting into. Like developing a taste for wine or scotch, sometimes metal tastes evolve and grow. One thrash metal moment I will always remember is Slayer and the scary, hypnotizing BIG RED PIT!