The KiLLeR DWaRfs. A Hometown Legend.

A Hometown Legend.
By Kate Campbell.

I’m two weeks home from the Monsters of Rock Cruise and the music just hasn’t stopped!! My American friends are quite envious because it really does seem that a lot of the bands followed us back to Canada. Slaughter played The Rockpile the first weekend I was home and Y&T the second weekend. Now heading into the Easter weekend, I get to see one of my all time faves – The KiLLeR DWaRfs. They really did  follow us home because Toronto is home for them too. I’m particularly excited because their show was initially booked for tomorrow night when I will be in Buffalo, New York seeing Queensrÿche. There’s not much that would keep me from a DWaRf show but those of you who know me now, know that is a no-brainer. Lol.

I was lucky to see a lot of the DWaRfs on the MoR Cruise, both on stage and off. We traveled from the airport to our hotel with their wives, their manager and their photographer (who are all fantastic people) and as it turned out, they were all staying on our floor. We spent a few hours around the pool getting to know each other and the guys flew in later that night, so we had a chance to meet them ahead of the cruise as well. By the time we got on the ship, it felt as though we were old friends. We’re a friendly bunch, us Canadians, so the immediate bonding wasn’t really a surprise. I’m fortunate to be able to say that I now consider the DWaRfs, and their families, to be friends.

My usual partner in crime, Victoria, was otherwise engaged tonight, but there is never a shortage of fans eager to go to a DWaRf’s show, so I knew I wouldn’t be alone.  Tonight, I’m accompanied by my friends Rob and Craig. We’re meeting some more friends at Club Absinthe in Hamilton, Ontario, where tonight’s show takes place.  I’m excited for both guys to see the show. Craig is an enormous fan and has been for three decades, but Rob has never seen them. They are both in for a treat.

The first of the three local opening bands is named Prismind. They are pretty good. Good players, good singer, all original I think. The most stand-out thing about them is the extremely young drummers extremely large drum set. By the time the third opener had finished, he had unscrewed the last cymbal and finished loading out. We presumed his mom was waiting patiently outside with her Taurus station wagon. (Yes he was that young!)
Second up, a band by the name of Gin n’ Toxic. My friend Dineen recognized frontman Iggy from many other local bands we’ve seen over the last couple of decades. He’s one hell of a frontman and knows how to work up a crowd! They covered a whole bunch of super fun punk stuff from back in the day: Sex Pistols, Ramones and even some Teenage Head. Loved them!!!
Third up, Phear. Undeniably, all very talented, but in my opinion, a little too full of themselves. They came off a little boring and self consumed. I can’t help but think that they just take themselves way too seriously. I personally like an opening band to do at least one or two fun cover tunes but these guys were focused only on their super technical, original stuff. The singer had a great range and I would’ve enjoyed an unexpected King Diamond cover or perhaps even a little Queensrÿche.  But alas, they were more interested in playing for themselves than for the crowd.  I took the opportunity to go to the bar for a couple of drinks.

And now – the moment we’ve all been waiting for. The energy in the room is one of excitement mixed with love and admiration for these local heroes who have been entertaining most of us since our now, long passed, youth!! Their combination of magnetic energy and pure heart is unmatched. After more than three decades of working their asses off in the tough music industry, they still put on a show that will thrill old fans every time, while appealing to a brand new audience as well.
With an enormous catalogue of music, the setlist is always exciting and ever changing.
The KiLLeR DWaRfs is a band that has worked hard and paid their dues tenfold. They are greatly respected by their counterparts and their fans alike. They are a truly inspiring bunch of guys with a huge presence and a positive energy that leave their fans wanting more, time and time again. I can personally attest to this, as this will be my fourth time seeing them in the past three weeks. The Meister and I caught every DWaRfs show on the Monsters of Rock Cruise and I noticed we weren’t the only ones.

Tonight, the DWaRfs start off as explosively as ever!  Coming Through was the opening song. That one always gets the crowd going.  I saw the trike side stage and knew that Russ would have some of his usual crazy antics up his sleeve. The DWaRfs never disappoint. The connection they have to their fans is one of pure heart and mutual admiration.
The KiLLeR DWaRfs have a new CD called Start@One which Russ always jokes that they’ve been working on for 20 years. (It’s not far from true!)

They played a great mix of new and old songs with the crowd belting out their favourites with the passion that you only see for a band who has spent more than thirty years working for their loyal fans. Russ shared the mic so a lot of fans had their chance to be a DWaRf for a moment. At one point, Russ ran through the crowd and out the door singing half a song from outside on the patio. You never know what to expect but that’s the best part!
During Keep the Spirit Alive, Russ purposely fell toward me and then gave me a huge hug. A bit of an inside joke because I am a crazy hugger. Whenever I saw them on the cruise (and now on land too) it was big hugs all around. In the second verse, he held the mic out to our new friend ‘Rocker Dave’ so he could sing. Dave told me afterwards that that was something he had always wanted to do, right down to that exact song and verse. Russ had clearly made his night!!!!
We saw Russ try to climb the rafters, fall off his trike a couple of times and attempt a headstand or two on the incredibly small stage. All in all, it was a thoroughly entertaining, super high energy show. One of my favourite things about the DWaRfs is that you can always tell they are having just as much fun as the audience. There’s not a single time I look at guitarist Gerry Finn and he isn’t smiling. This is what these guys love to do and it shows. 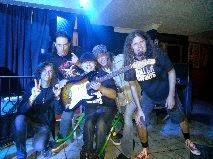 There was a young man at the fro
nt of the stage the whole night with a walker who definitely had some physical challenges and he was rockin’ out with Russ to every song. I heard that it was his first concert and at the end of the show, the guys all signed one of their guitars and presented it to him. It was a very touching moment. These guys are all heart and I love them all to bits!! (And this they know!!!)
An amazing night with an amazing band and amazing friends to share it with.
Rock on my brothers and sisters.
Until the next time…
DWaRfs RULE!!!!!!!

Huge thanks to my friend Amanda for proofreading my work and being awesome and thanks to Michael Sobocan for your great photography.