Well here we are exactly one year after the Meister’s first Sweden Rock Festival and again the intrepid Canadian is back  in Scandinavian Sweden for more.  Here’s my account of the lengthy travel day to arrive here:

I rushed out of the house, beginning my public transit trek to Toronto’s Pearson Airport with that nagging feeling that I’d forgotten something.  Sure enough as I was over halfway to the airport I realised that I had omitted my light rain jacket from my gigantic backpacker’s knapsack!  Oh well, it’s not going to rain anyway.
So the first thing that I noticed as the fairly new airplane’s wheels caressed the landing strip were the rain droplets covering the porthole windows of the cabin.  Whatever, it always rains in England and it’s far enough away from Sweden anyway! With a three hour layover to kill, I stopped for a nice classic English breakfast and since they’re serving at that time and my vacation has begun, a beer!  Just before I boarded the aircraft in Toronto I learned that the foretold had come to pass and the trains in Sweden were on strike, no doubt this weekend was chosen to cause as much difficulty as possible.  This would make travel to the festival awkward and difficult for me and many others.  The Sweden Rock Facebook page had many folks including SRF saying to take a bus to Malmo (my keyboard does not possess the ability for the necessary umlauts), Pagatag to Bromolla and then a festival bus to the site.  Let’s see how that works out for me!
Killing my three hours in Heathrow quite quickly I boarded the second leg of my journey supplied for an astronomical fee by British Airways (all airlines were similar pricing, I should add).  With no TV for the shorter ride and smaller airplane of the second leg of the journey, I promptly shut down into “sleep of the dead mode”.  Upon rising from the coma like sleep once again as we taxied along the runway to our assigned gate, I began to grumble a little about the obvious rain going on outside.  No matter, Solvesborg is a two hour train ride away, it won’t be raining there! 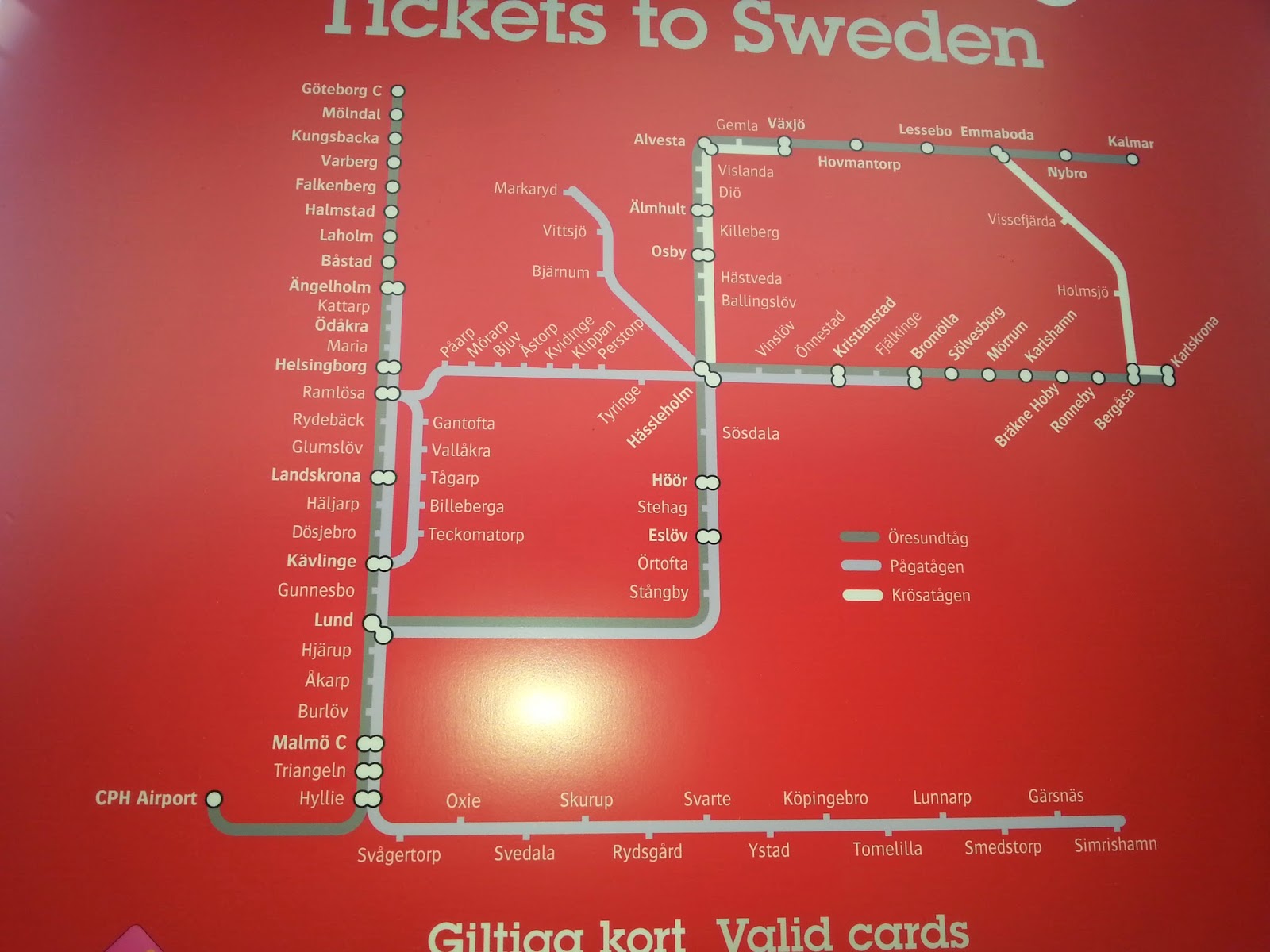 Now to find out where to catch this magical bus from the airport!  Spotting a place selling train/bus/metro tickets I qued up and waited for one of the four operatives to become available to speak to me.  Perfect….I found out that there was indeed a bus to take me to Malmo where I could catch Pagatag, which is just another style of train.  Not only that but my pre-purchased ticket was to be honored, even though it was a different company, different mode of transportation and even different times and destinations.  He directed me to take the first exit on the left out of the terminal and that’s where the buses would be, so I immediately took the first right, somehow getting turned around and confused unbeknownst to myself.  I wandered the terminals….all three of them looking for a bus that basically said anything that I would recognise from the original ticket still in my hands or from what I could remember of the new travel route plan.  There were several bus stops out there, but nothing looked familiar at all.  The two folks that I asked, who were wearing Sweden Rock and Uriah Heep shirts didn’t seem to know either!  Back inside we go to airport terminal three, this time over to the info booth.  Ahhhh, dummy you went out the wrong side!!  The long line of buses out this door signified that I was in the right place this time, along with the paper signs taped up randomly.  The bus goes to Hyllie, the first stop once entering Sweden from Denmark and is very close to Malmo, considered the outskirts.  From Hyllie I was told to take another bus to Malmo, but once I got there I followed my nose, or in this case the crowd to a train station across the road where I was directed to take the Pagatag train to Kristianstad and from Kristianstad another Pagatag to Bromolla.  One thing I did notice once we crossed over into Sweden was how remarkably heavier the rain was getting the closer and closer we got to Solvesborg and the festival!  Idiot…how did you forget your rain jacket?
I easily found the festival bus once at Bromolla, mostly I just followed the crowd of other obvious rockers.  It helped with the big sign in the bus window and the friendly, light humored driver calling to me, presumably on seeing me sporting last year’s SRF shirt. 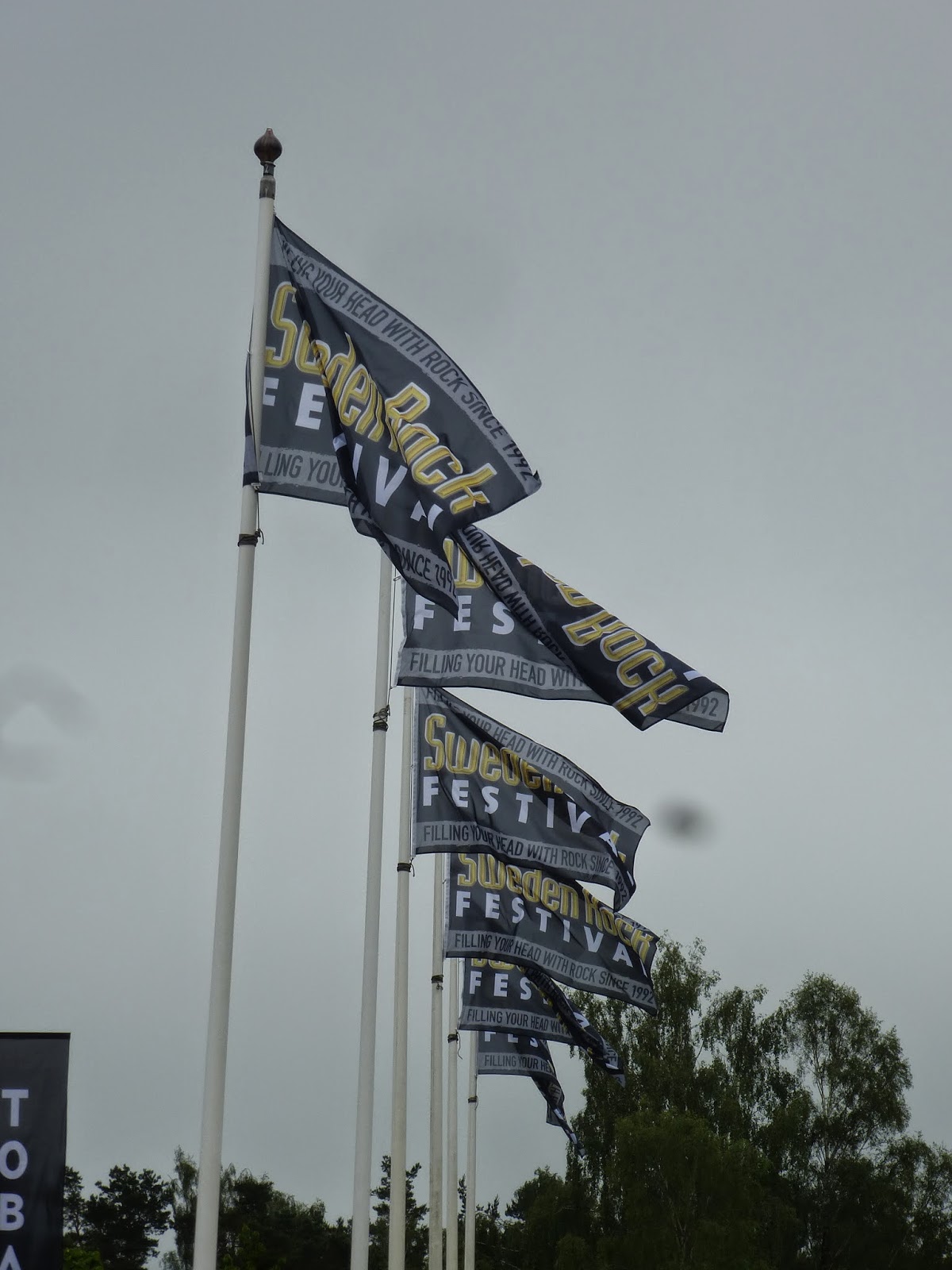 Fifteen minutes later, now around 6:30 pm, I entered the grounds of Sweden Rock festival.  I wonder what, if anything the grounds are used for the rest of the year or does a lot of this stuff like Sweden rock shop stay year round?  First order of beeswax….into the supermarket for a cheap rain poncho!  Hell no, the supermarket has different ideas this year, not re-stocking the item that I had surely seen in there last year, come to think of it a lot of things were absent.  Sweden Rock Shop netted a logo’ed Sweden Rock rain poncho for a small arm & a leg, which I wasted no time in scrambling into.  (I also purchased a laminated neck lanyard of the band schedule, which would be a great idea for MORC).  No sooner had I completed this mission and crossed the road to line up and check in for accreditation did it stop raining!  Well better that than a downpour for sure and with the looks of the skies more rain is on the way! 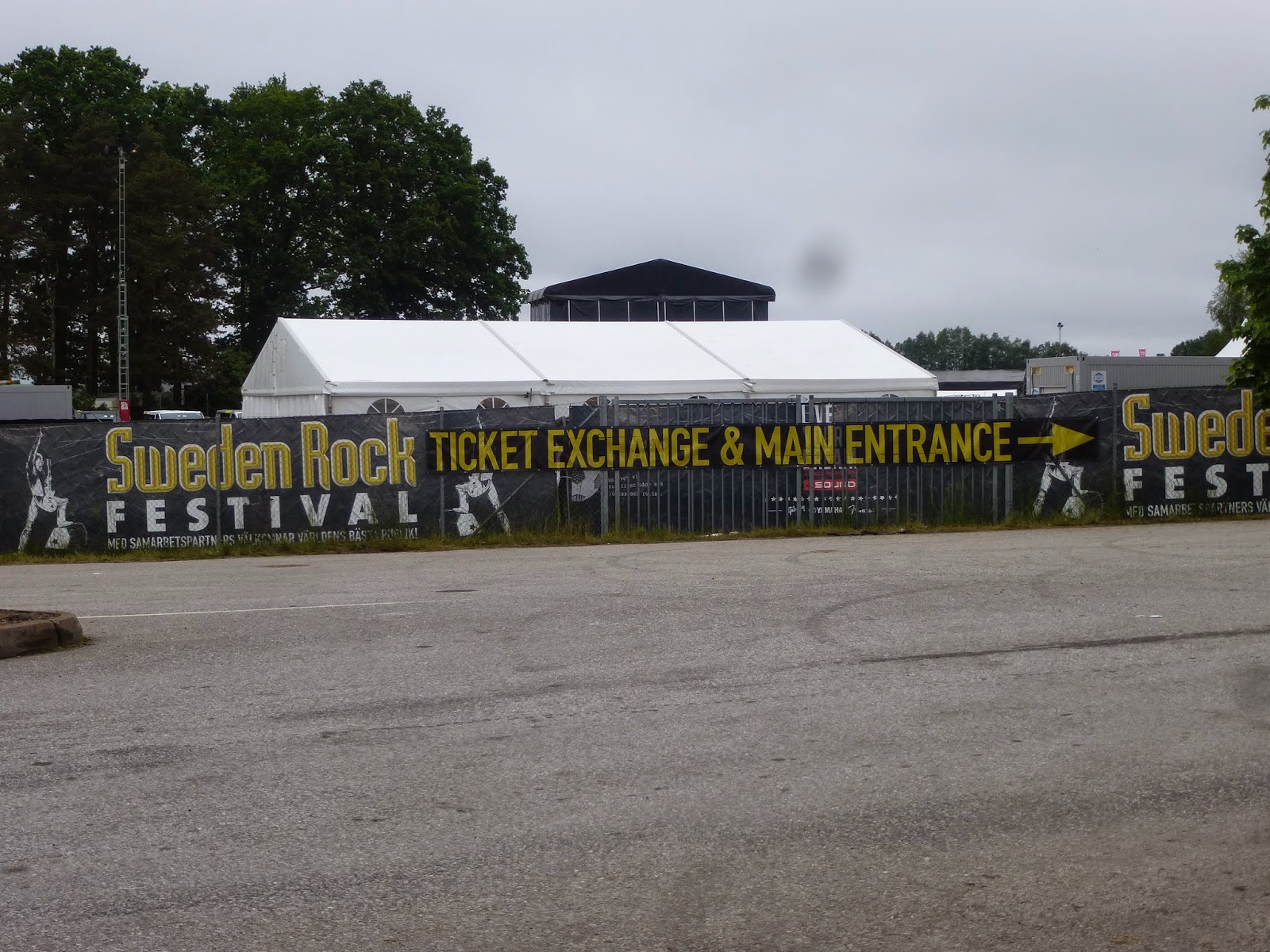 After erecting my domicile (DBHQ) I set out to wander the vendors of food and merchandise set up outside of the actual festival area.  I was not even out of the camp area when I had struck up a conversation with a gentleman and before long was passing over a Decibel Geek card!  It was damp, cold and misty out as I walked around.  There were more t-shirt booths set up than I could imagine and other things for sale from jewellery (might pick myself up a nice skull ring or something), to patches, to CD’s, to phone covers and zippo lighters all rock themed of course! 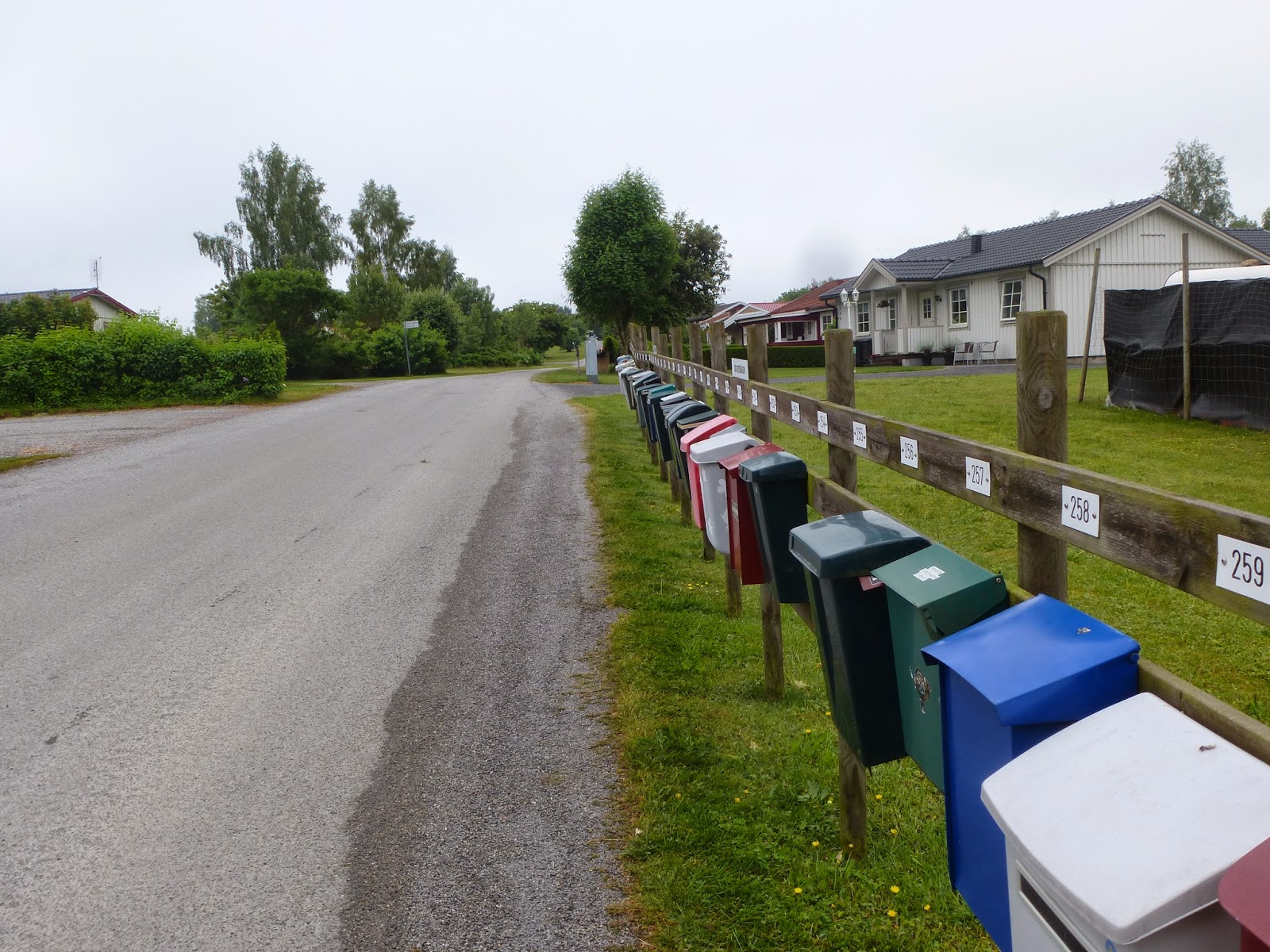 People of all sorts of walks of rock were here, some older, some younger, some dressed quite oddly, but
a good number carried a beer in their hands as they walked.  Some had obviously had too much already as they staggered around, but no-one seemed out of control and everyone was partying.  Walking past the public campground it was already raucous with music and laughter as anticipation was building for the festival start tomorrow.  My camping area was on the other side of the grounds, deemed the quiet area, but rather situated in the middle of everything were what look like cottages.  Last year I assumed that these were for the workers but upon further examination think that they that the well-manicured cottage style homes are exactly that.  Must be rock fans to choose to live there! 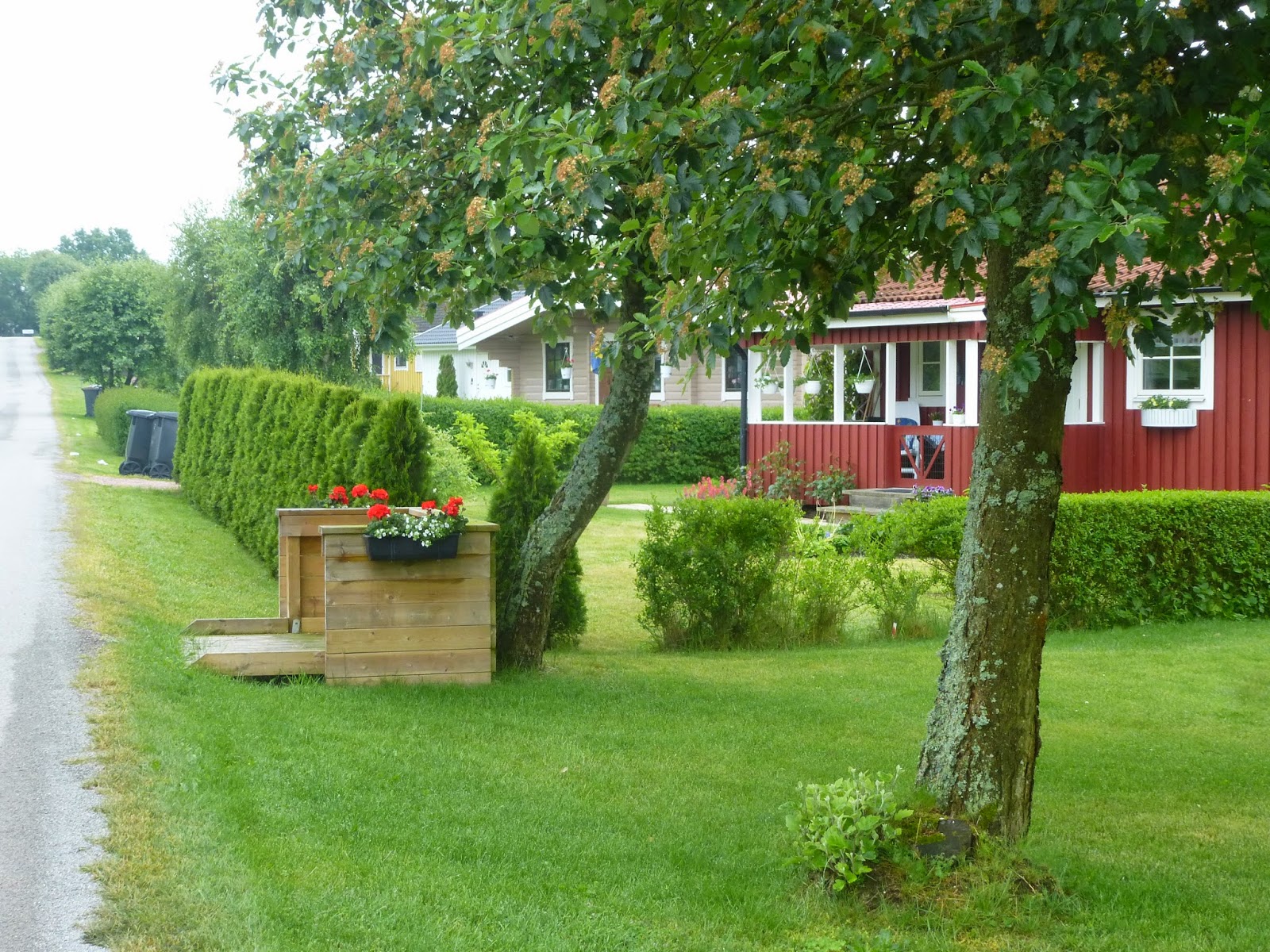 I found myself back at the supermarket and took a better look this time around.  There was a decidedly lower number and selection of items compared to last year.  There were no camping mats and tents for two.  After near freezing to death last year, it was the purchase of a camping mat that saved my life after the first night (no, I don’t think I’m being overdramatic).  Not being able to fit one into my knapsack, I had planned to purchase one of the foam life savers here and dispose of it upon my departure, even at one point thinking to do the same with the tent, sure glad I didn’t do that! 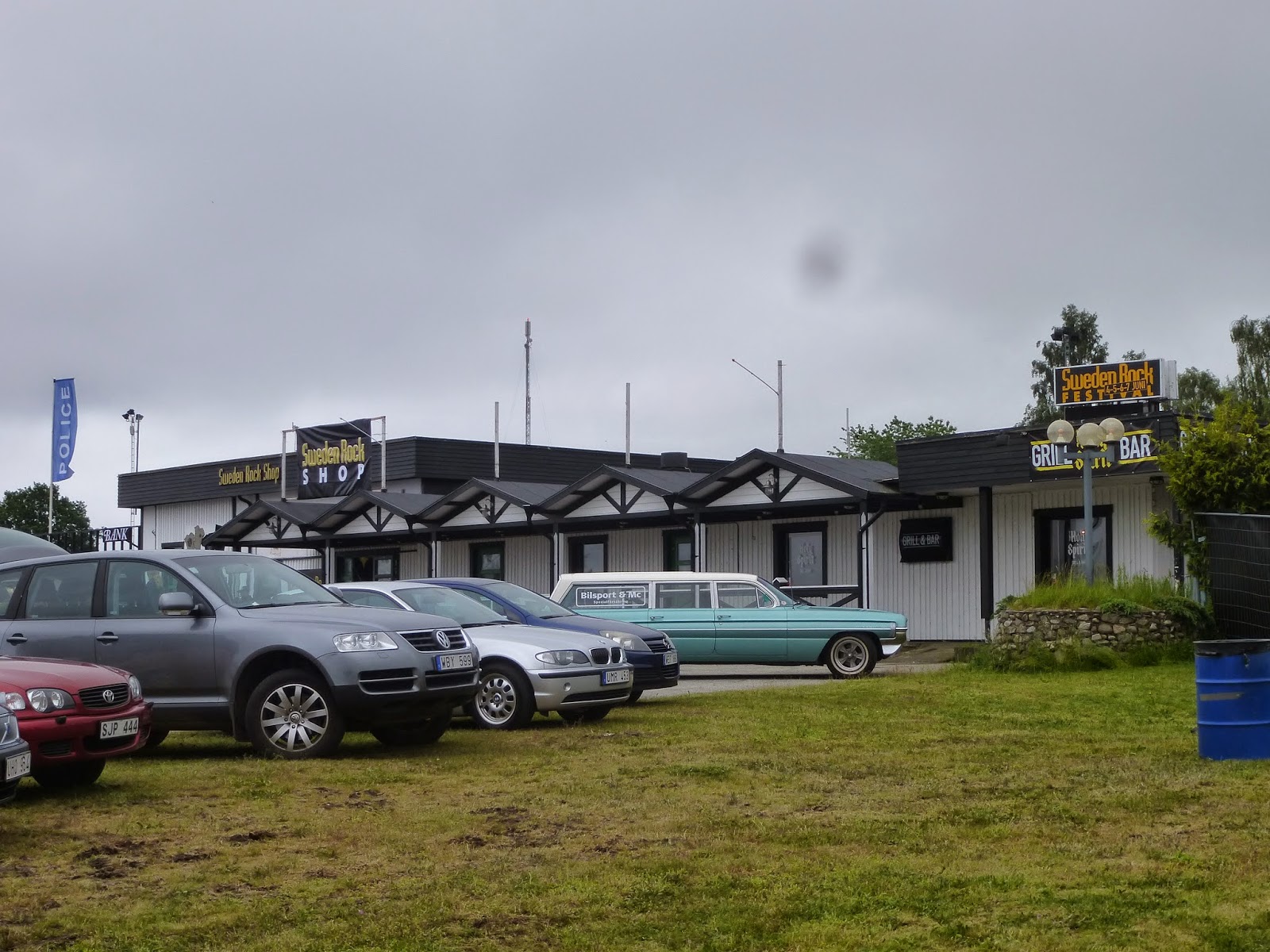 Probably I will have to adjust my plan of going into Solvesborg tomorrow to see the ruined castle as the bus schedule has all been adjusted with no trains stopping there due to the strike, but we’ll see how it goes, not much else to do until the first band at 3:30pm methinks.
Returning to DBHQ to get some sleep, still tired after the lengthy travel day and it occurs to me that I need maybe a bigger statement next year (oh that’s right I’ll be back again!) in the form of a Canadian flag outside my tent, just an idea.  Hope I don’t freeze tonight, the blanket that I nicked from the airplane should help, that and layering my clothes, if not there’ll be a Meistersicle in the morning.

Cheers from Sweden,
The Meister