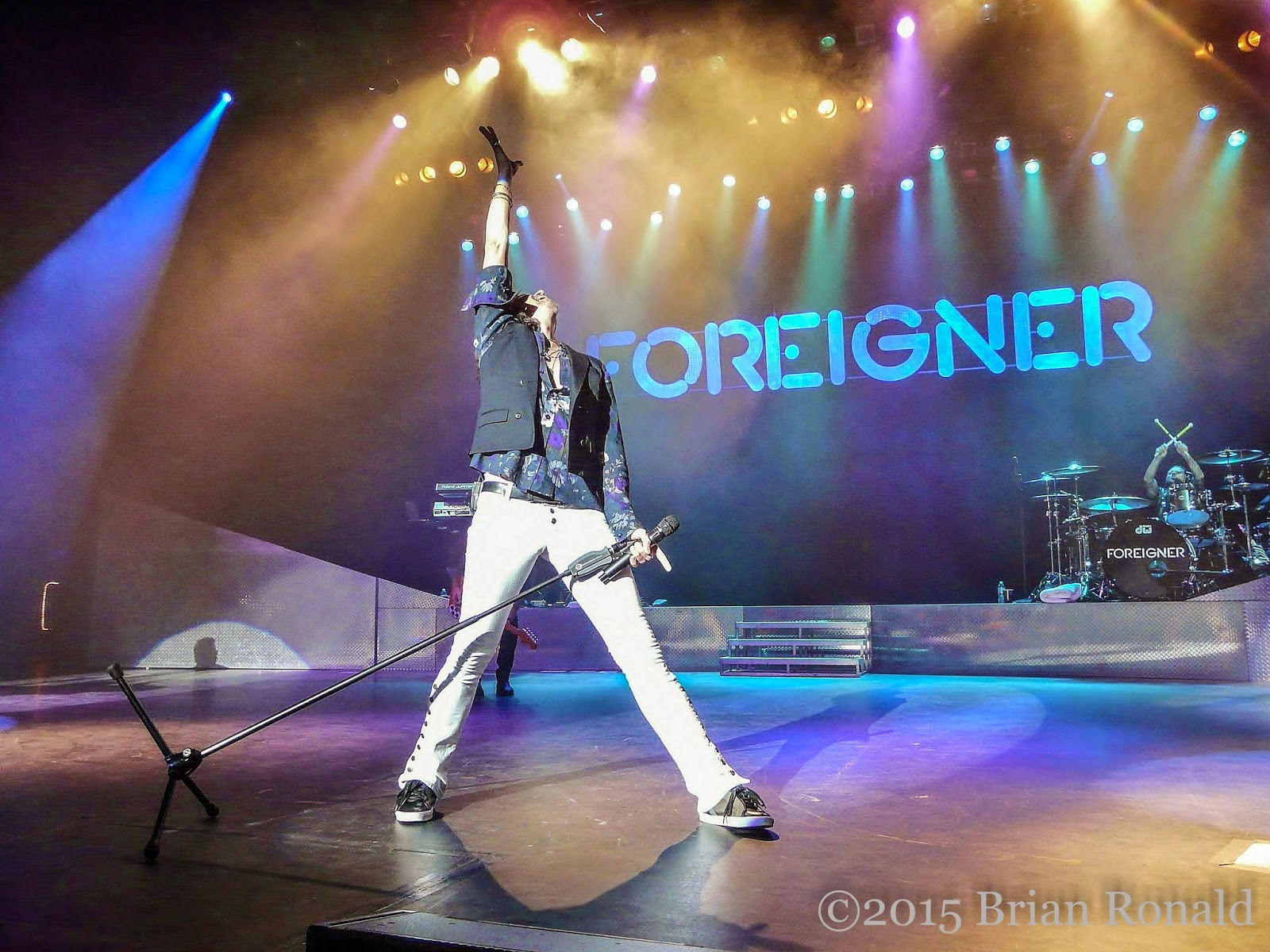 If someone had told the ten-year-old (or thereabouts) me that years later I would be going to see the band live that did that song for a beer commercial I’d have thought you were nuts! Yes, that’s right way back in the 80’s the Foreigner song “Cold As Ice” appeared in a beer commercial. I don’t remember what the beer was, but I’m told that I quite enjoyed the tune when it came on, dancing around the family living room. I guess I was a rocker at an early age. Some years later Foreigner became the classic rock/dock rock soundtrack of the summer as friends and I hung out at someone’s cottage which included sitting on the dock (“Dock Rock”) and also some “Cold As Ice” beverages. Foreigner has been with me for a good portion of my life and even though they’re not something that I gravitate to for regular listening enjoyment, hearing the tunes in a live setting just makes sense.

Now some may say why would I bother to go to see Foreigner since there’s no original members left in the band? Well, that’s technically not wholly true as, to my understanding, Mick Jones, founding guitarist is still an official member of Foreigner but is hampered from playing and touring due to illness. That aside what you do get with a Foreigner show are professional musicians playing some of the best classic rock for that nostalgia of my youth. Among those professional musicians are vocalist Kelly Hansen in the position originally held down by Lou Gramm. Hansen has 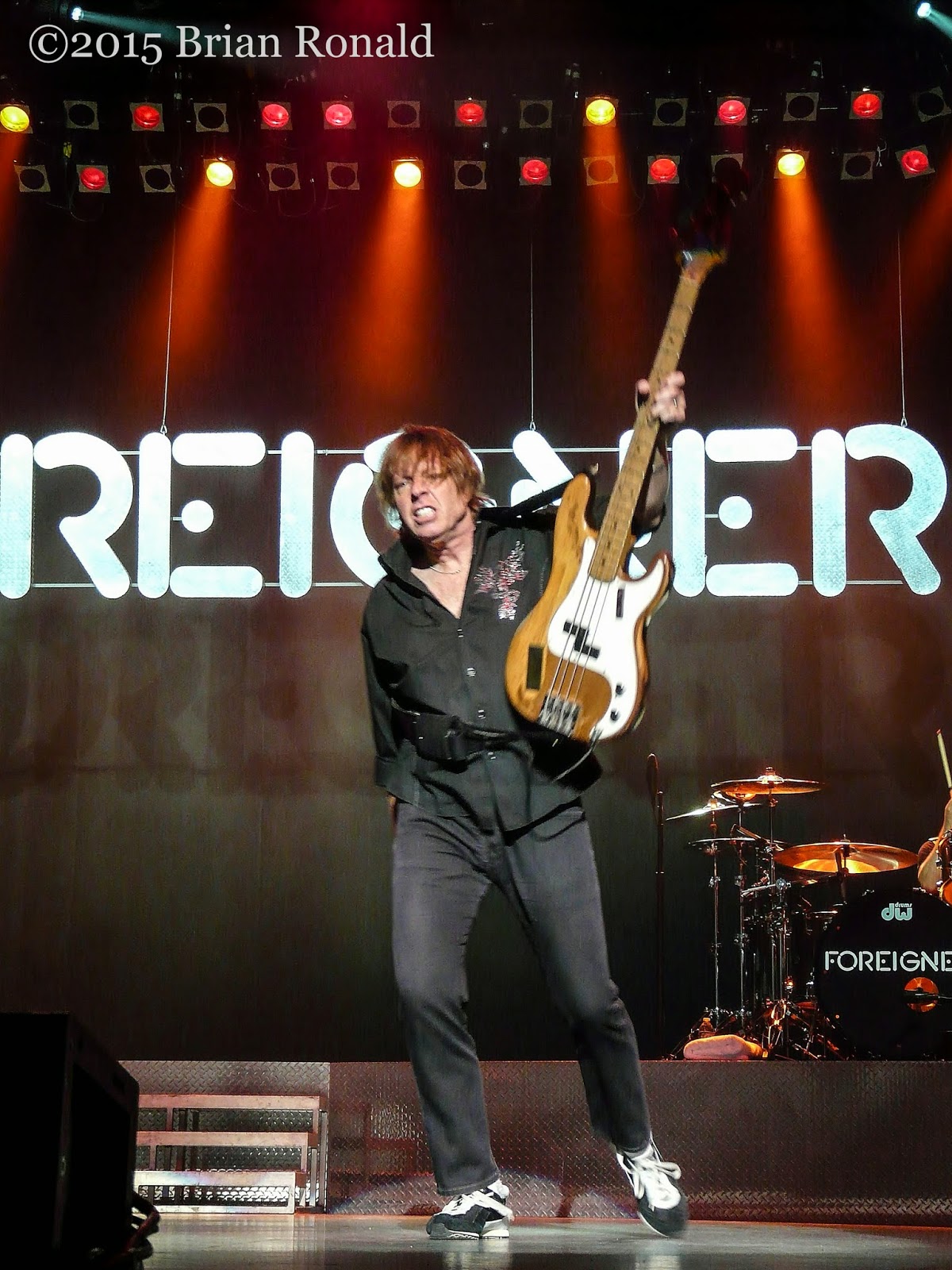 been at the helm of Foreigner since about 2005, but some may know him from the incredible late 80’s band Hurricane who issued four stellar records. But even better than that is bassist Jeff Pilson. Name not familiar? Well, try this on for size, Jeff Pilson was the longtime bassist and member of 80’s sensation Dokken featuring the vocals of Don Dokken and guitar wizardry of George Lynch who sold over 10 million records worldwide. So my question is why wouldn’t you go and see Foreigner? And I wasn’t the only one as two back to back nights at Casino Rama in Orillia, Ontario were both sold out, not to mention that two weeks before that the band was in Kitchener, Ontario to another sold out crowd. That’s three shows circling the Toronto area, all sold out!

Looking around the casino auditorium this was a little different style of crowd than The Meister’s usual concert forays…I felt young again! Things began on time with a recorded into and an announcer requesting the audience to “Please welcome …Foreigner!” As the band filled out the stage, “Double Vision” from their 1978 Double Vision album led the charge. Whether Pilson was aware of it or not his bass was horribly loud, like in a bad way, at least from our seats way up on the mezzanine at the back of the auditorium anyway. The bass was thundering over the guitars which seemed a little dull in the mix, something that I think they should have sorted by now as this was the second of the two shows. The bass seemed to calm down a little during the second number of “Head Games” as the band had lot 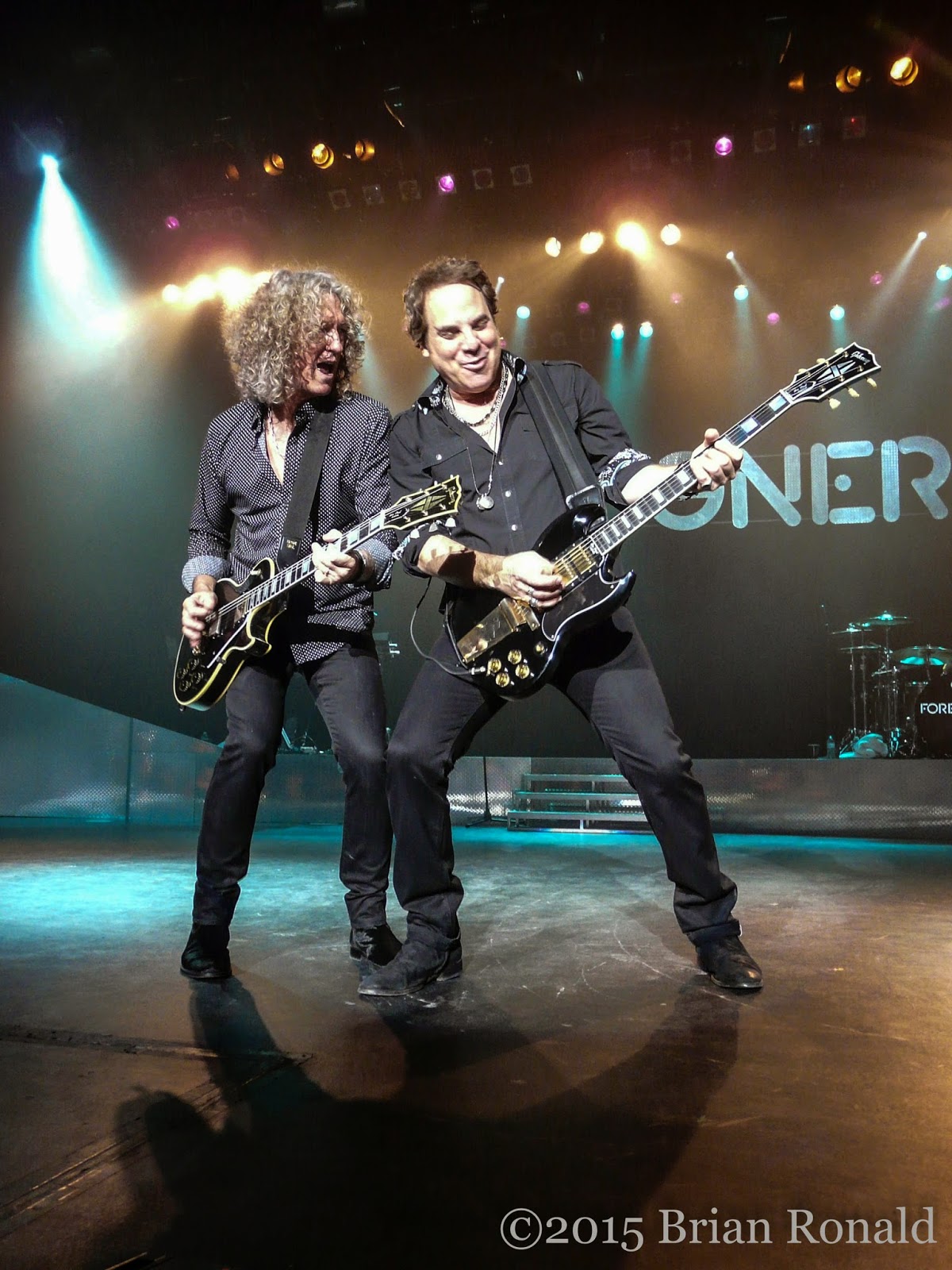 s of space to roam around on the good sized stage. Hansen took a moment to address the crowd and when I say “address” I mean he heckled some latecomers and was actually quite funny about it. He said that we were “already a better crowd than last night” whom he couldn’t get out of their seats he added hintingly. Yes, that’s right, this was the first concert I’ve attended in forever where the whole audience (aside from a few at stage front) were remaining seated! The beer commercial soundtrack “Cold As Ice” was next on the roster, making me crave another ice cold beverage, unfortunately, such things were banned from this auditorium. With his voice sounding amazing, Hansen vacated the stage, running up the aisle through the audience and climbing onto the mezzanine before regaining the stage to wrap up “Cold As Ice” before taking a moment to catch his breath and more humorous monolog about being out of breath. The bass had seemed to have settled down a little and the band really started sounding great. After announcing that they would be looking for the most romantic couple slow dancing for this next one, he said that there may even be a prize for that couple. A few couples began dancing in the aisles as “Waiting For A Girl Like You” started, but before long the floor aisles and even the mezzanine were packed with dancers. “Dirty White Boy” followed before Hansen informed us that the next song used to be full electric, but Jeff Pilson had concocted a new arrangement as they performed a great acoustic rendition of “Say You Will”. Now it was time for the band introductions as Hansen told some jokes about each band member while introducing them to the audience. Quite a humorous bit, but a little too lengthy for my tastes and serving to n 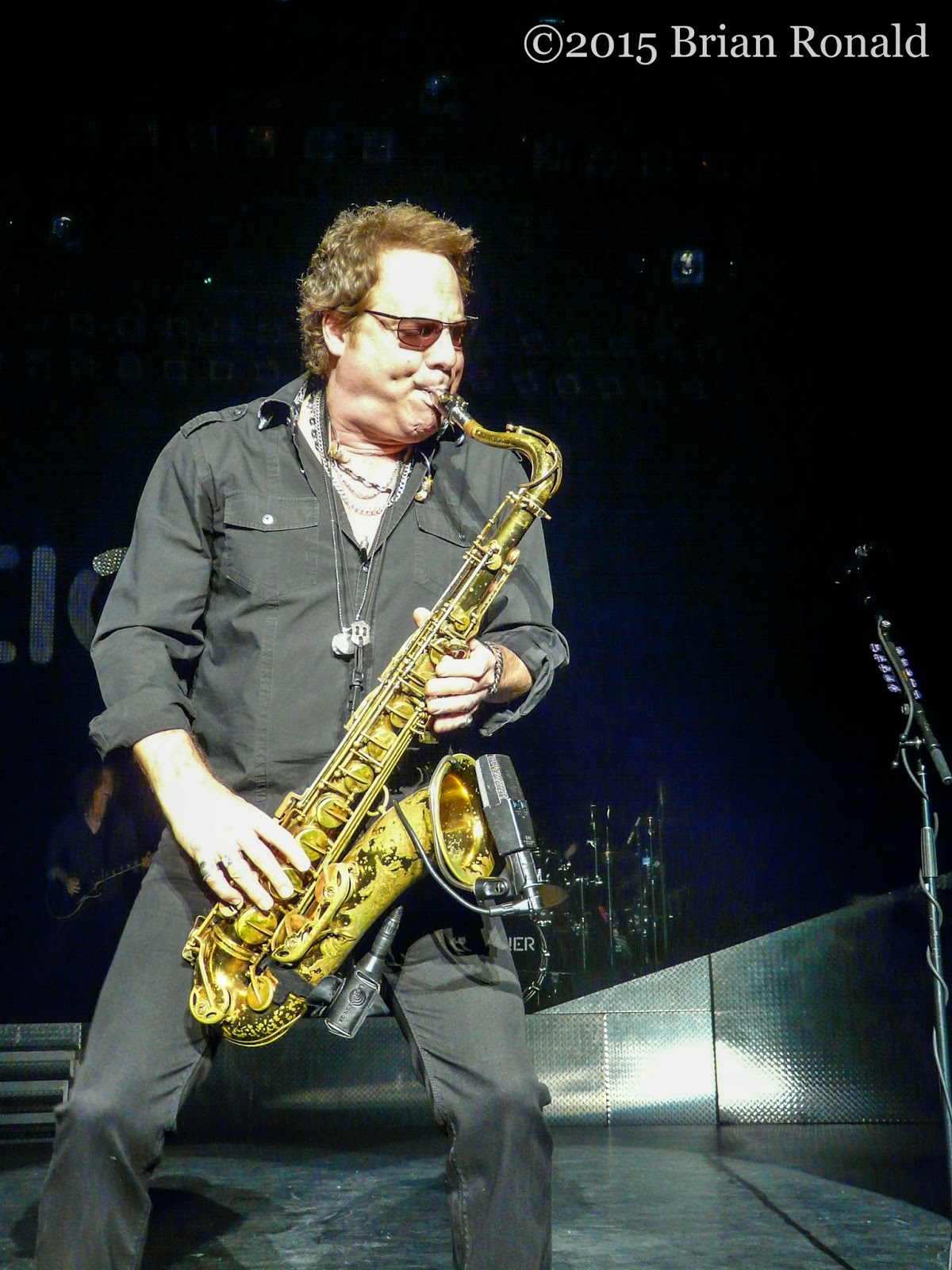 otch down the energy a little. Kelley then began to virtually beg people to get out of their seats and by the first chorus of  “Feels Like The First Time” almost everyone in the whole place was on their feet. Finally! You can’t see a rock concert sitting down, it’s just wrong! Alas, I was obviously outnumbered as at the completion of the song everyone was again seated. The beginning of “Urgent” saw a few return to the standing position, but for me I felt a little awkward as the only one standing in my balcony seating area and blocking those behind me. The following keyboard/drum (timewaster) solo lost any momentum gained as everyone again took their seats. The lengthy version of “Jukebox Hero” got people up again though without too much trouble. The whole band sounded absolutely incredible on this track and Hansen can sure hold a note. After a brief respite of stage silence, the cheering audience quelled down once Foreigner again took the stage with “Long, Long Way From Home”. Unfortunately, a good portion of the crowd was once again seated and it appeared that there were even more than a few vacant seats as people had left the event early, something that wasn’t lost on Hansen as he again quipped about the seating. He’s quite the comedian with a good presence and fabulous crowd interaction, man I wish I’d been able to see Hurricane! The Orillia Vocal Ensemble choir all dressed in black filled the stage around the band for “I Want To Know What Love Is” before a little guitar solo led off “Hot Blooded” which saw Pilson and keyboardist Michael Bluestein switch instruments half way through. 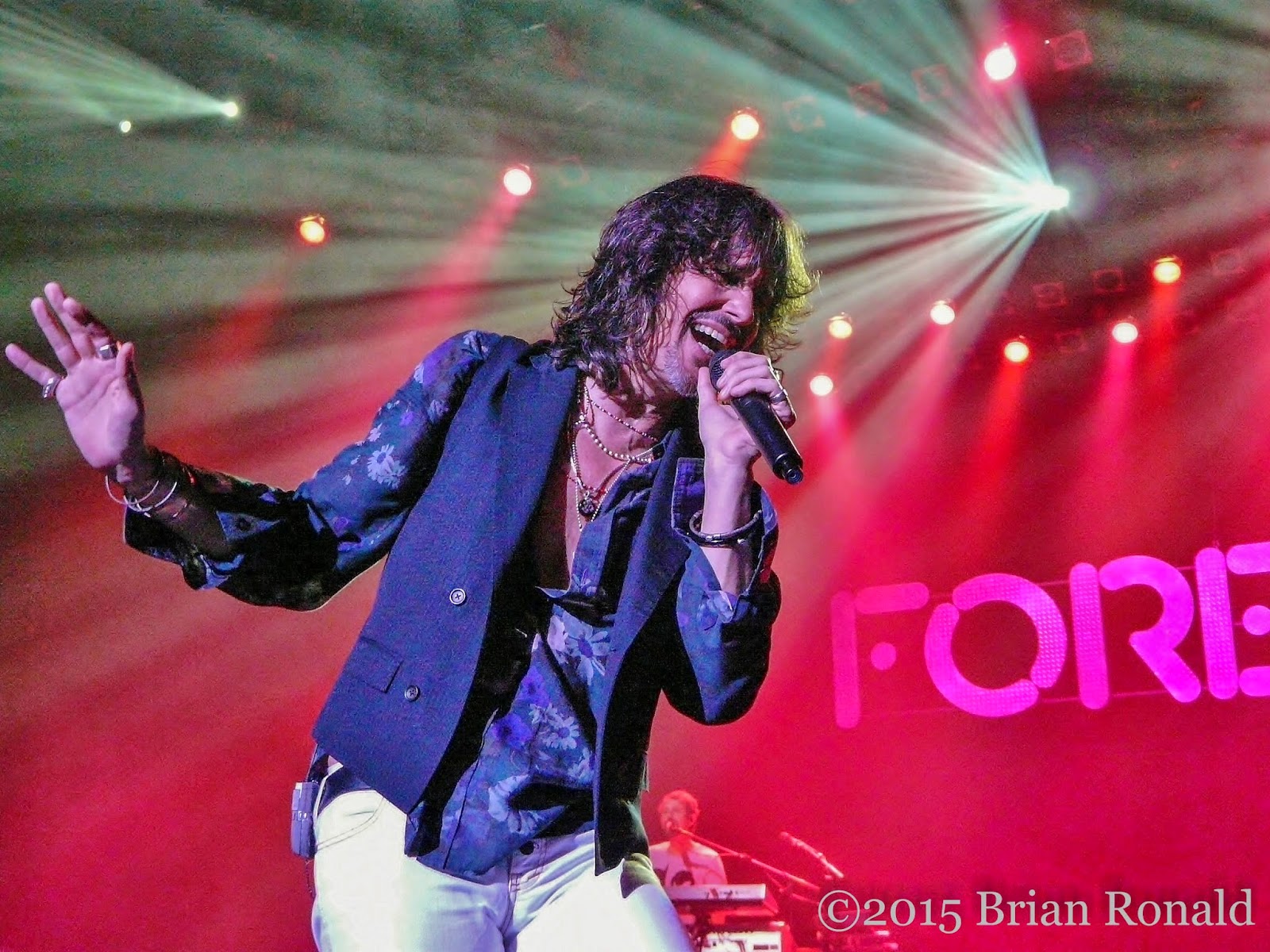 Foreigner did what they could to rock this rather dull (well maybe different people just enjoy live music in different ways) crowd in what was overall a great performance. If I had one complaint, it would be the shortness of the setlist with only 12 songs performed. Yes, the show lasted for almost two hours but I would rather have heard another tune or two such as my favorite “That Was Yesterday” instead of so much talking/crowd banter and the solo portion. That aside, get out and see this band as they roll through your town….who knows maybe Mick Jones will feel up to it that night and be on stage for you!