THE METAL HEART BEATS ONCE AGAIN
For anyone that has not yet discovered the “new” Accept you are seriously missing out!!  Maybe you were unaware that they were back or you by-passed the disc thinking it was just another lacklustre offering from a band struggling to regain their days of glory.  Pay attention!!
. 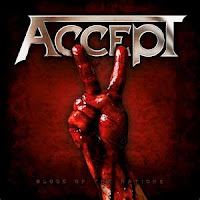 Long time band members, Wolf Hoffmann and Peter Baltes along with Herman Frank and Stefan Schwarzmann have recruited the talents of Mark Tornillo (formerly of T.T. Quick) to step into vocal duties left vacant by Udo Dirkschneider.  They unleashed Blood of the Nations in 2010, their first recording of new material in fourteen years, to an incredibly positive reception from critics and fans the world over.  Andy Sneap (having worked previously with bands like Megadeth, Arch Enemy, Testament and Onslaught) was at the helm for this reformed incarnation’s premiere work of art, steering them to their highest charting album to date.  In Canada Blood of the Nations debuted at #53 on the Nielsen Soundscan Top Hard Albums chart.
. 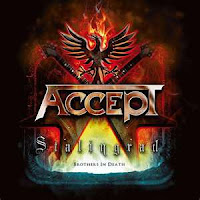 Stalingrad, again with Andy Sneap, dropped in April 2012 and is not so much of a new album, but more of a direct continuation of Blood of the Nations and certainly a worthy follow-up. Stalingrad debuted at #81 on the US Billboard Top 200.  The much anticipated North American Teutonic Terror Attack Tour with fellow German metalheads, Kreator sees the iconic Germans on the continent for 23 dates between September 5th and October 4th!!  And then two weeks later they return to Europe for another 18 shows in 27 days and then to Japan for three straight nights!
.

I was able to catch their performance at The Phoenix Concert Theatre in Toronto (one of only three Canadian dates on the roster) on September 12th, 2012.  As the tour is entitled “Teutonic Terror Attack 2012” and Accept has a tune from the Blood of the Nations CD called “Teutonic Terror” anyone would think and expect that they would be the headliner on this show.  As a rabid Accept fan, mere words cannot begin to express my disappointment when I strolled into the club and as I surrendered my ticket I could hear Accept‘s “Hellfire” playing.  “Don’t worry,” I said to my buddies, “it must be a recording of pre-show tunes.  There’s no way they’d be on stage at 8:30pm!”  How wrong I was!  It was indeed my German heroes on stage so early!  Holy crap, as the headliner they shouldn’t be on stage until at least 10pm, are they on German time here?  I left my buddies in the crowd, forewent 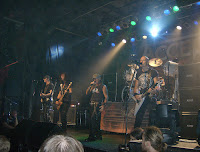 the beer purchase and wormed my way to within one person away from Wolf Hoffman‘s side of the stage.  In talking to the guy next to me I was able to determine that I had not missed much as “Hellfire” from the Stalingrad CD was the second tune.  We had only missed “Hung, Drawn & Quartered”!  The classic “Restless and Wild” was next up to the delight of the crowd, the sweat already beginning to roll off Hoffman‘s shaven head.  “Write a letter, you’ll feel better” claims “Losers and Winners” from the iconic Balls to the Wall record.  Mark announced that they’d like to do a couple from the latest CD as the opening notes of “Stalingrad” rang out, followed by “Shadow Soldiers”.   They sounded tight and you could tell that Peter (Baltes), Mark (Tornillo) and Wolf were having a great time as they pounded through my personal favourite track off of the Blood of the Nations CD in “Pandemic”.  A deep cut from 1981’s Breaker found them launching into the title track from that record and then into another newer song with “Bucket Full of Hate”. The boys looked happy to be on stage, especially guitarist Wolf Hoffman.  His broad smiles and facial expressions enticed everyone in the crowd into loud cheers as he started the familiar opening riff to “Princess of the Dawn”.  From some angles, he even resembled Bruce Willis as the familiar blue glow from dozens of cameras and cell phones spotted the audience.  “Up To the Limit” off the Metal Heart CD was a bit of a pleasant surprise.  “Teutonic Terror” brought a surge from the crowd as they chanted along, making axe chopping motions to coincide with the line from the chorus.  The “Metal Heart” pounded in next and during the guitar solo, in the bask of the greenish stage lighting, Wolf almost looked a little like Gollum from Lord of the Rings as he bent low to the stage, staring out into the audience. 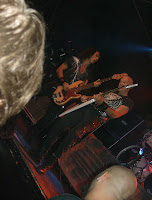 The “Hidey-hi-ho” intro warned that the almost thrash number “Fast as a Shark” would be next.  Perhaps their best-known song, “Balls to the Wall” brought cheers and a sing-along from the Phoenix Concert Theatre attendees, but alas it would signify the end of Accept‘s set as they thanked the crowd and moved off the stage without returning for an encore.

Although new singer Mark Tornillo‘s raspy tones easily handle the classic Accept compositions and he does not sound all that far removed from Udo Dirkschneider, I was extremely disappointed in the misleading tour name and still long to see my German heroes in the full on headlining concert that they deserve.

Accept has managed to stay true to their roots while at the same time re-inventing themselves with these two newest releases and I highly recommend you give them a listen, especially Blood of the Nations!
. 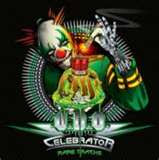 While Accept is rejuvenated and soldiering forward, having some of the best success of their career, former frontman Udo Dirkschneider, coincidentally born on the same day as the release of Stalingrad, April 6th, is continuing to enjoy a productive solo career.

Udo is fresh off a headlining performance at Wacken Music Fest in Germany (which was broadcast as a live stream on Thursday, August 2nd) and has recently released his fourteenth CD entitled Celebrator on May 4th, 2012 with DVD/CD package Live in Sofia due out September 28th, 2012.
.