The Wild! _ Sweden Rock 2019. Canada’s THE WILD! truly are a force to reckon with. They’ve grown a lot in popularity and recognition with good reason, but there’s still so very many not in the know. The band, based out of Kelowna, B.C. launched in 2012. Releasing their first video in 2014 for the song “Roadhouse” brought them airplay on Canadian rock radio. That video going viral brought tours with the likes of Korn, Rise Against, Monster Truck, The Glorious Sons and One Bad Son. So much was the hype and The Wild!‘s reputation precede them did eOne Music Canada sign them to a deal. Without ever even seeing them play live yet! Not too bad for an independent band! The Wild! – Sweden Rock 2019! at Sweden Rock 2019, The Wild!

Musically the band is a melting pot of Hard Rock, Southern Rock, Punk, and Blues ground up and spit out with a flamin’ “take no shit” attitude. It’s brash and in your face, making you want a shower after listening! The debut 7-song EP, GxDxWxB, which stands for God Damn Wild Boys arrived in 2015. Produced by none other than Mike Fraser (AC/DC, Aerosmith, Jimmy Page, Van Halen). Two years later, 2017 brought us the 10-tracker Wild at Heart with Mike Fraser again at the helm. Ladies and gentlemen…I present The Wild! – Sweden Rock 2019! 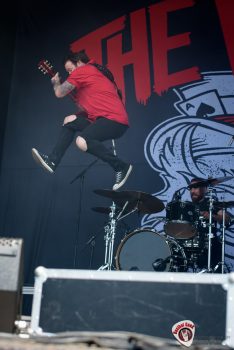 Having been introduced to The Wild! a few years back thanks to my trickery at weaseling my way into a Juno Awards pre-party extravaganza. The band came on stage at something like 2 am or 3 am for a three-song set. And I was hooked (link). Here at Sweden Rock 2019, The Wild! opened festivities as the first band on Thursday, June 6. This is the correct way to open a huge festival. The Wild! came out and basically, dick slapped the crowd into wakefulness. Their energy and passion on stage is unbridled. They basically beat the shit out of the early morning crowd…and I was exhausted after, myself. With a punch that never let up The Wild! delivered their hard-hitting blues infested tunes with a little stage choreography to boot. And chugging beers and smoking cigarettes…which vocalist Dylan Villain somehow manages to make cool again.

The set included all the usual suspects and some of my favourite The Wild! tracks like “Slowburn”, “Best in the West”, and “Ready to Roll”. To get a better idea of The Wild! on stage reference the video taken from the band’s Facebook page below. It was filmed at Sweden Rock and if you look carefully you may just see The Meister and ole Uncle Irwin (Shawn Irwin – photographer) in the action! Also a fan-made live video for “Ready to Roll” that I found on YouTube. Their latest single, “Helluva Ride” can be heard now through all the usual suspects.

They are The Wild! & they are fucking crazy. 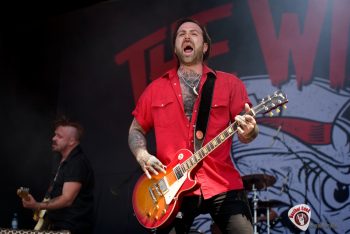