To Hell And Back: Hellion in Toronto 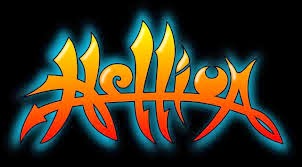 “Queen of Scream”, Ann Boleyn brought her 2014 version of Sunset strip icons Hellion into Toronto on October 17, 2014.  The Rockpile West was the scene of the crime so to speak and 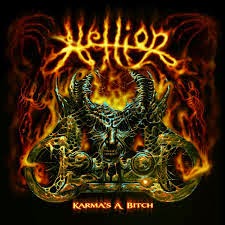 Hellion blew the roof off the place despite the weaker attendance.  Hellion dates back to Los Angeles, California in 1982 when they formed with the original line-up of vocalist Ann Boleyn, guitarist Ray Schenck, drummer Sean Kelley, and bassist Peyton Tuthill.  After years of struggles with line-up changes, record companies basically ignoring Hellion, Ronnie James Dio taking them under his wing, internal disputes and Ann Boleyn receiving threats from stalkers, among other woes, Boleyn has reformed Hellion once again.  This 2014 version consists of a veritable roster of “A-list musicians” with drummer Simon Wright (AC/DC, Dio, UFO), keyboardist Scott Warren (Dio/Dio Disciples), Bjorn Englen (Dio Disciples) and guitarist Maxxxwell Carlisle.  A new EP was recorded, titled Karma’s A Bitch and released on October 7, 2014.

The tour, which saw Hellion stopping in many cities in the US and also her first ever appearance in Canada with the October 17 performance in Toronto, featured Greg Smith (Ted Nugent/Ted Poley/Alice Cooper) stepping in for Bjorn Englen and the addition of rhythm guitarist Georg Dolivo (Rhino Bucket).  Fireball Whiskey was on hand issuing samples in conjunction with their backing of the Hellion tour, but I was disappointed with the support that Toronto was giving Hellion as I looked around at the weaker attendance and saw only one person sporting a Hellion shirt (me).  There were, however, several other shows going on in the area as well on this same night, the curse of a growing metal community and Hellion is not as well known as some.

Hellion took to The Rockpile stage beginning with the “Resurrection” intro and straight through into “Will Not Go Quietly”.  They sounded extremely tight as should be with the quality behind Boleyn and she herself had a voice that obviously had not aged one iota. “Hell Has No Fury” off the new Karma’s a Bitch EP was next followed by “Betrayer” and “Karma’s A Bitch” both off the same EP.

During Simon Wright‘s drum solo I realized that Boleyn was standing on a circle carpet that had been placed on the Rockpile stage and adorned with white duct tape to look like a pentagram.  Throughout the set, dry ice billowed from side stage adding to the eerie setting created along with the cobwebs draped over the drums, keys, and amps, not to mention the pentagram mat.  The Black Book release was represented next with a double shot consisting of “Storm Rider” and “Living In Hell”.  Preceding Maxxxwell Carlisle‘s guitar solo was “Run For Your Life” and although the band was awesome and talented, I personally am not a fan of solos (unless incorporated into a song).  Not being a musician myself I just find them to be basically noise that I don’t understand, especially in a set that only has twelve songs listed.  “Bad Attitude” (probably my favorite Hellion song) was followed by “Watch the City Burn” and “Rockin’ ‘Til the End” to completely cover everything from Karma’s A Bitch.  After a brief respite, the band returned for the encore.  Sadly they chose to skip “Break the Spell”, which I could see on the setlist and only play a cover of “The Green Manalishi (With the Two-Pronged Crown)”, which went off extremely well.

The entire band hung out after the set, signing autographs, taking photos and having beverages.  I had a couple of brief moments to get them all to sign the setlist that I had pilfered from the stage and even a photo with Ann Boleyn.  It was great to finally see Hellion live, especially after Ann‘s cameo on MORC singing “East Meets West” with Doro.  I do hope that this is not the end of Hellion in Toronto.