Anyone having read many of my previous concert reviews will know that a good portion of the awesome concerts that I have been able to catch are thanks to a club in Toronto called the Rockpile.  Actually there’s now two of them, one at each end of the east/west subway line and I’ve received comments from all around the world saying how they wish they had a Rockpile in their hometown.  Dom and Steve (Owner and promoter respectively) have done an incredible job of luring some high quality rock groups from Canada and around the world into one or both of their Rockpile Clubs.  Just to name drop a few of the acts hitting the stages in these two awesome venues over the last little while ….UFO, Michael Schenker, Autograph, Helix, Brighton Rock, KiLLeR DWaRfS, Slaughter, Red Dragon Cartel, Y&T, Stryper, Jack Russell’s Great White, and coming soon London Quireboys, Vixen and Hellion.

On Saturday July 26, 2014 they added another name to the long list in that of Cinderella frontman Tom Keifer.  Tom Keifer issued his first solo album, The Way Life Goes, in April of 2013 and while the album received favorable reviews from friends and on line sources it did not particularly appeal to me.  The album showed the bluesy acoustic side of Tom Keifer’s musical journey and while a few of the songs were catchy I feel they could have benefited from a full on metal band.  Bearing this in mind I headed out to his show at Rockpile East that night expecting to hear the odd Cinderella tune, but thinking it would mainly be comprised from The Way Life Goes.  Holy Crap was I wrong!  Keifer and his band put on what I’m going on record right now as saying was the best concert so far this year and I’ve seen a lot of shows!

After three opening acts warmed up the crowd Keifer’s band hit the stage with Keifer trailing them out to take the mic.  The setlist was sort of split up into three sections, the first containing five songs leading off with Cinderella’s “Night Songs”.  I forgot just how great that song really is, especially live with a band like this that was spot on.  Keifer displayed no loss of vocal prowess in any way and before long had me wondering if he’d discovered some fountain of youth.  Two songs from The Way Life Goes solo album followed with “It’s Not Enough” and “A Different Light”.  I was certainly getting a different light on these songs as while I didn’t take to them particularly on the album, they were absolutely incredible and of course way

heavier live.  Tom was even sporting a thin leather jacket saying “It’s Not Enough” constructed with duct tape across the back of the jacket.  One thing was strikingly evident already (aside from this band was about to level The Rockpile East before this night was over!) and that was that Tom Keifer seemed like a rejuvenated and different man on this stage.  I have never seen him so engaging with the audience, so energetic, so interactive with his audience as he was this night.  Two more debut album Cinderella tunes, “Somebody Save Me” and “Shake Me” brought this first “section” to a close with me singing away at the top of my lungs, fist in the air.  Not bad for a guy who didn’t even feel like coming out tonight!  I was not the only one caught up in the engaging performance, but in particular I noticed the woman stage right who had been putting on a truly embarrassing display, hurling herself on her back on stage, pulling and grabbing at Tom’s pant legs and so forth, but I suspect she was more enamored with Keifer himself than the music.

As Tom and the band all took seats on some wooden bar stools they treated us to the first verse of “Heartbreak Station”, Tom encouraging us all to sing along, before continuing into “The Flower Song”.  Tom introduced his wife Savannah to us as she took up a stool next to him, singing duet for “Ask Me Yesterday” and “Don’t Know What You Got (Till It’s Gone)”, the latter of which awesomely finished full electric.  “Nobody’s Fool” was the end of this sort of section and for those keeping score that’s a fair amount of Cinderella compositions so far.

Tom Keifer gave us a short little guitar solo before “Solid Ground” which saw Savannah and another young lady taking up mics to the rear of the stage and providing background vocals.  The harmonica

came out for “Cold Day In Hell” before it was back to Cinderella with “Coming Home” and “Shelter Me”.  Tom was all over the stage, escalating the intensity and emotion in his performance, singing in crowd member’s faces as the show came to an end and the band left the stage.  The Rockpile would have none of that nonsense and I personally felt my voice “go” as I screamed, applauded and cheered along with everyone else for the encore.

An encore indeed we did get that was absolutely mind blowing.  They ripped through a truly awesome version of The Beatles track also made famous by Joe Cocker, “With a Little Help From My Friends”.  Tom enticed us (which wasn’t hard at all) to sing along with “Gypsy Road”, which sadly would be the final song for the night.  Tom Keifer took the time to slap and shake hands with as many of the crowd near the stage as he could reach and you could see the intensity of his performance tired had him out as he took the mic to deliver a truly heartfelt thanks to us all for helping keep these songs alive. 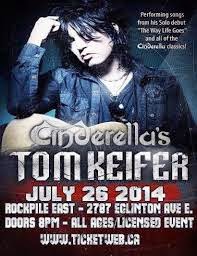 That my friends was a wrap on what is quite possibly the best show I’ve seen so far this year (no disrespect intended to any bands I’ve previously seen this year) and many around me were echoing the same sentiment.  As we milled around, finishing beers, chatting and meandering towards the door I noticed two awesome vocalists had also been in attendance as I saw Priya Panda (Diemonds) and Nick Walsh (Slik Toxik/Famous Underground) in the club.  Nick Walsh even posted a comment under a Facebook photo from the evening commenting something to the effect of “best show I’ve seen at Rockpile East!”.  If you get the chance make sure you get to Tom Keifer’s next show in your town, trust me you won’t regret it!

Decibel Geek Photographer Brian Ronald was in London, Ontario the night before where Tom Keifer and others performed at Rock The Park 2014.  Here’s a link to his photos from that event including Tom Keifer’s set: Rock The Park July 25, 2014