THE WARLOCK FIGHTS FOR ROCK
In 1986 Germany’s Warlock issued their third album called True As Steel.  This record brought some interest from North America for the band on the strength of the Fight For Rock single.  My personal journey with Warlock started with the big hit All We Are from the next and last album, Triumph & Agony.  In those days the only way we would get new music was through rifling through my friend’s older brother’s collections.  One day I was over at his house and his brother had left Triumph & Agony lying around in the living room.  Attracted by the fantasy images of the cover we spun the record and fell in love with the anthem song All We Are.  From there we went back in time (or back through his brother’s collection as it were) and were excited when we came across another Warlock album in True As Steel.
Hailing from Dusseldorf, Germany, the band Warlock was fronted by former model Dorothee Pesch, better known under the moniker of Doro.  Unlike much of the other female fronted rock at the time, this band was loud and harsh with lyrics concerning sorcery, witches and demons rather than love, romance and sex. 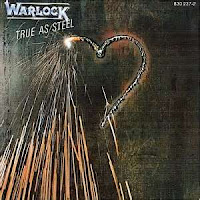 True As Steel opens up with the dungeon like sounds of clinking chains and the decree of “No Mercy” as an intro into Mr. Gold which is a song that made it onto many a mix tape of my youth.  But it was the single and video for Fight For Rock that would reach the airwaves of MTV.  Former model and front woman of Warlock, Doro Pesch won her way into the hearts and onto the walls via posters of the male audience.  The fast paced assault of Speed of Sound is one of the stand out tracks on this record.  The title track is an anthem and should get you singing along with it.  Lady in a Rock & Roll Hell is another great cut from the latter half of this recording, mixed by Michael Wagener.
Forming in 1983 and citing influences such as Iron Maiden, Judas Priest and fellow Germans Accept, Warlock released four albums.  One each year starting with Burning The Witches in 1984, Hellbound in 1985, True As Steel in 1986, and ending in 1987 with their most commercially successful offering of Triumph & Agony.
Having played the Monsters of Rock festival at Castle Donnington in 1986, the first female fronted act to do so and with the success of the Triumph & Agony record on both sides of the water, Warlock should have been a household name.  Sadly the constantly revolving door of the band saw Pesch being the only original band member and the only German left in the band by 1988.  The next album was released under the Doro moniker to avoid any legal complications and Warlock was left behind.
Basing herself in New York, the German Metal Queen from Dusseldorf toned down the Gothic fantasy metal as a solo arrtist for a more mainstream approach.  Her second solo offering was produced by none other than the legendary Gene Simmons of KISS, but still failed to receive the desired reception and was the last release available domestically in North America until 2000’s Call of the Wild, even though she had recorded five albums in between.  When the grunge explosion caused the 80’s style of metal to fall from favour, Doro soldiered on continuing to record and kept a small but loyal following (that’s me….lol).  She has often recorded cover songs including Billy Idol’s White Wedding, Metallica’s Nothing Else Matters, Heart’s 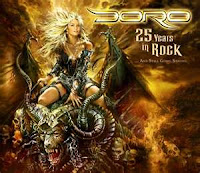 Barracuda, Procol Harum’s A Whiter Shade of Pale and duets with U.D.O., Motorhead, Tarja Turunen of Nightwish, Saxon and the Scorpions.  With a back catalogue of eleven studio albums and many live or compilation CD’s along with at least six DVD releases, the three and a half hour epic 25th anniversary concert from 2008 was finally issued in 2010.  The aptly titled 25 Years In Rock…and Still Going Strong features many special guests celebrating her career at a concert event in Doro’s home town of Dusseldorf.  I have just recently acquired this package myself and eagerly await the time when I can clear the days schedule and sit down to watch it from start to finish!
After almost thirty years in the music business Doro shows no signs of slowing down with a tour of Europe, rocking on both the 70,000 Tons of Metal Cruise in January and the Full Metal Cruise in May, already booked for Wacken Open-Air Festival and Sweden Rock Festival for 2013 and a North American tour supporting the latest Raise Your Fist album.  The album is available from Amazon, I-tunes and the record label Nuclear Blast: www.nuclearblast.com 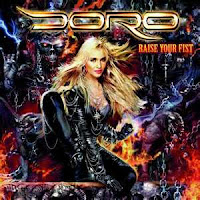 Next week Doro will be rolling into Toronto and The Meister WILL NOT MISS THIS SHOW!!  I have never seen Doro live, but have been a fan since way back as I said earlier, but it gets even better than that for me……the awesome Toronto band Diemonds is slated to open (https://steeletech.us/decibelgeek/?p=651 for a review of Diemonds), Then Sister Si
n turns up the heat for a very anticipated (by me) show (https://steeletech.us/decibelgeek/?p=722 for my previous interview with Liv Jagrell) followed by the highlight of the evening with headliner Doro.  But better still is that Liv Jagrell (vocalist for Sister Sin) has set aside some time to chat with me and Decibel Geek cohort Wally.  I know you’re thinking how cool that is, but wait, there’s more……Doro’s long time drummer Johnny Dee (formerly of Britny Fox) has graciously agreed to a quick interview/chat as well!  Well if you have that much of a thrill not only seeing some of your favorite bands on one bill and been waiting a long time to see Doro, you might as well go for the gusto and arrange for an interview with the German Metal Queen herself!!!  Hope I don’t get starstruck and mumble incoherently…..lol!
Visit Doro’s official websites: www.doro.de and www.doropesch.com and watch for mine and Wally’s Doro interviews and concert reviews coming next week to Decibel Geek!