U.D.O. Gets Decadent: A Review of The Forthcoming U.D.O. Album

62-year-old, Udo Dirkschneider, departed German metal legends Accept back in 1987 beginning a successful solo career and has issued an immense catalog of music under the U.D.O. banner.  The 15th such effort, the forthcoming Decadent, features Andrey Smirnov (guitar), Fitty Weinhold 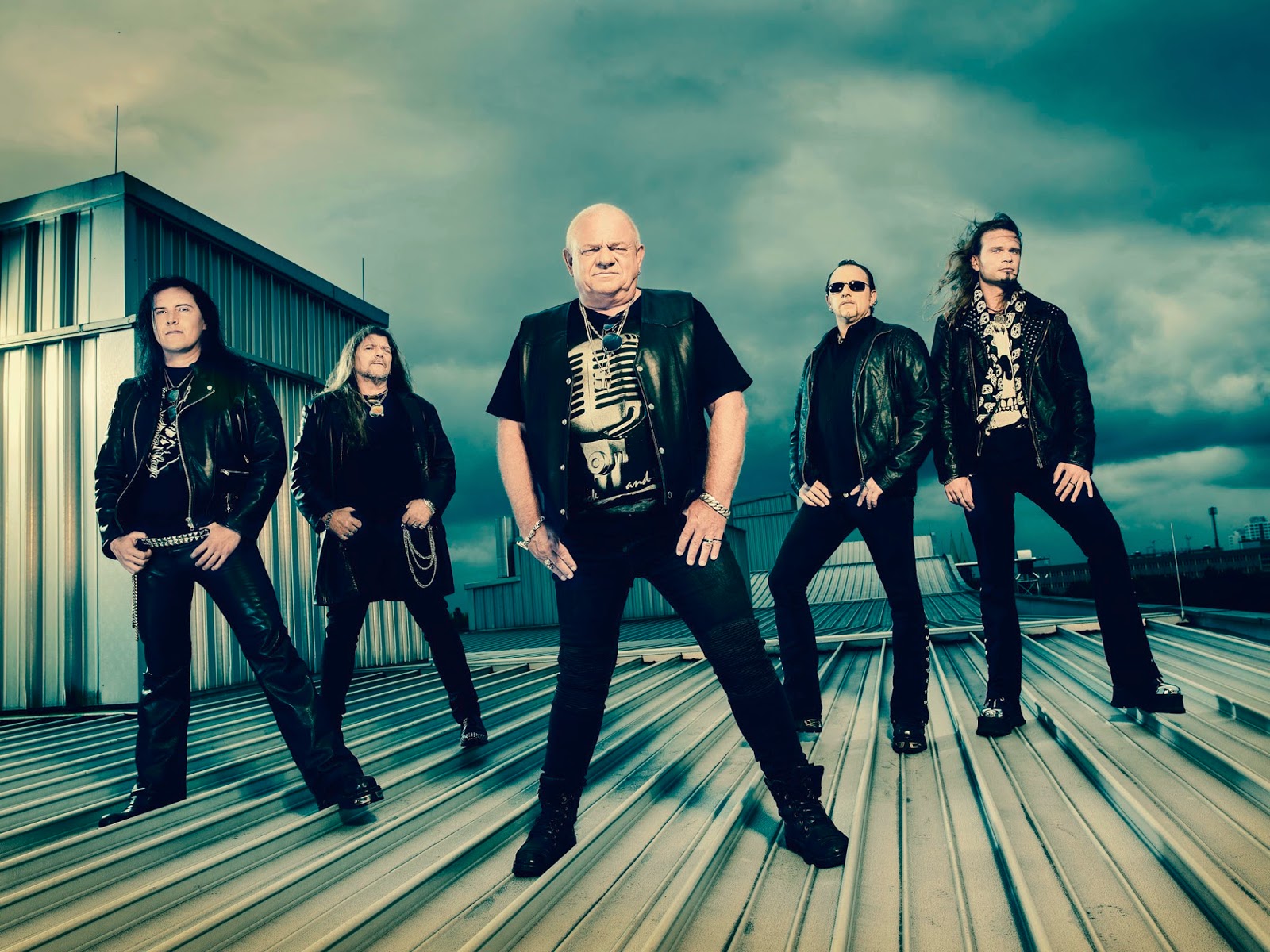 (bass and sharing production with Udo), Kasperi Heikkinen (guitar) and Francesco Jovino (drums).  It was announced, however, on December 23, 2014 via the U.D.O. Website and Facebook page that Jovino would be departing the band for personal reasons.  Perhaps Udo‘s son, Sven Dirkschneider, currently assisting Saxon on tour while drummer Nigel Glockler recuperates from surgery, will be chosen to fill the void?  Or perhaps even you could be the new U.D.O. drummer with this post on the official website: “Drummer Francesco Jovino left U.D.O. due to a personal reason.  The band is searching for a new drummer now since a complete world tour is scheduled for 2015 starting early March 2015.  If you feel ready to become the new U.D.O. drummer feel free to mail your application to fsuepfle@itm-agency.com (please NO big attachments with soundfiles or similar, if we’re interested we gonna contact you and ask for further information).”  Only time will tell, but no matter who it is U.D.O. is high on my list to see live again and I hope Decadent affords me the opportunities to do so!

With the main theme of his fifteenth solo studio album, Decadent, being that of social criticism, the album deals mostly with the decadent behavior of the rich upper classes according to the press release.  The release also states that during his time performing all over the world, Udo has experienced and witnessed a lot of things, including the devastating gap between rich and poor and the ruthless behavior of those in power.  “Decadent behavior by privileged society exists in the whole world in completely different shades,” says Udo. “Decadence is almost like a universal language. What bothers me the most is the ego-centrism that goes along with that. People who have everything seem not to really care about the world around them anymore; it’s like they use their own privileged status as an absolution for that. Also they do not seem to see that there’s a correlation between their own luxury and the poverty of others.”  Decadent is produced by the same successful team that delivered Steelhammer in 2012, Udo Dirkschneider, Mattes and Fitty Weinhold with Jacob Hansen (Volbeat) mastering. 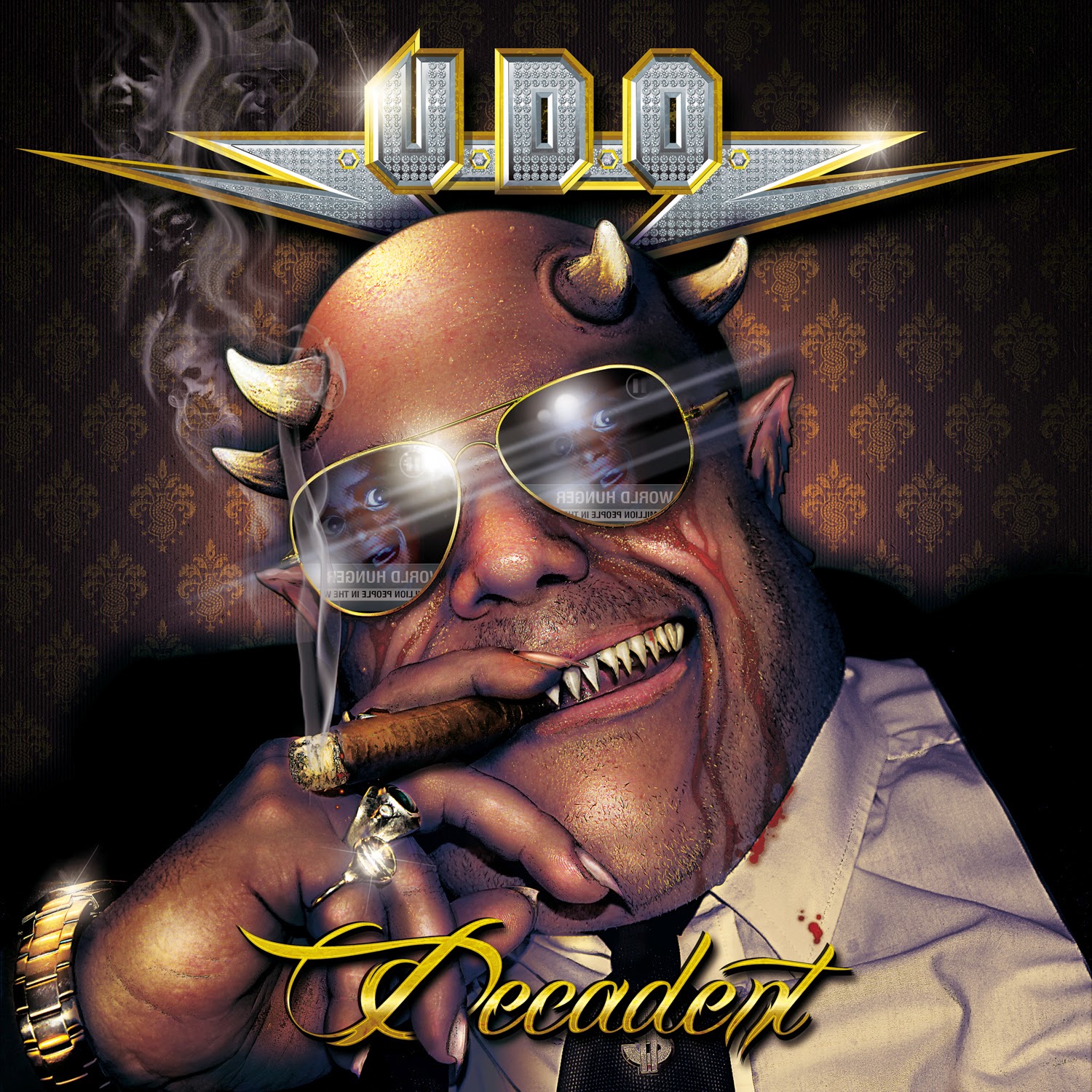 Decadent hits the ears with “Speeder”, a track that exhibits a little difference in sound to Steelhammer‘s fare but nothing overly experimental…not a bad thing by any means. The cat scratched, gravel-raked trademark vocals of Mr. Dirkschneider are once again in the forefront.  The title track and lead single, “Decadent”, has a hook that will quickly implant itself in your brain and remain there for some time to come, not to mention the message of the composition.  A song that immediately made The Meister‘s MP3 playlist, perhaps even one of U.D.O.‘s finest, has also been given the video treatment.  “House of Fake” appears next, loaded with trademark chords, guitar solos and gruff vocals showing that Udo has no intentions of slowing down, awesome!  “Mystery” chugs along in this slower paced composition that features some different vocals and a catchy chorus.  “Pain” is another blatant standout with an incredibly memorable hook to the chorus and again makes a statement about the rich that is said to be the theme of Decadent as shown by the lyric “Try eating some of your own shit for once”.  I’m not a fan of the power ballad “Secrets in Paradise” finding it slow, boring and generally painful so it gets skipped in every listen, but it’s just not a style that I particularly enjoy in general, so no reflection on U.D.O.  “Meaning of Life” rebounds in the fine U.D.O. power metal formula that I’ve come to expect and the crushing riffs of “Breathless” beg to have the volume level raised.  “Under Your Skin” has a thrash/speed feel to it at times as it crashes through the speakers at a breakneck pace, but “Untouchable” raises the bar again with it’s chanting group vocal chorus guaranteed to have your fist in the air and the volume inching up yet again.  The assault of “Rebels of the Night” attacks instantly with a pounding riff quickly beating you into submission and the softer beginnings of the longest track “Words in Flame” give way to a plodding composition to draw Decadent to a close.

Overall, consistency is a strong part of what U.D.O. does, but still manages to keep it fresh and once again the hard working German has outdone himself here.  Twelve blistering songs from one of Metal’s biggest legends and unmistakable voices.  With a Meister score of 9/10, Decadent is one absolute “must have” album and an early contender for the top of 2015!  Well done U.D.O., see you on tour in Toronto in 2015?