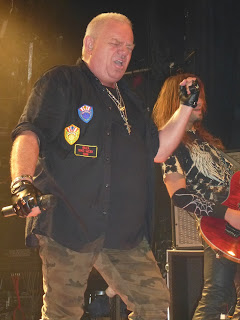 I’VE BEEN HIT WITH A STEELHAMMER!

German Metal King, Udo Dirkschneider is back to wage war on your ear drums and his weapon is the Steelhammer. The former Accept lead singer is back with a new record called Steelhammer due out May 24th, 2013. But The Meister has it early and has already been spinning it for a few days now.

Udo formed Accept in Solingen, Germany with Wolf Hoffman and Peter Baltes in the late 1960’s. They rose to fame in the 80’s with such hits as “Princess Of The Dawn”, “Fast As A Shark” (one of the first speed metal songs), “Metal Heart” and of course the smash hit “Balls To The Wall”. In 1987, after seven studio albums, Udo left Accept to pursue a solo career. While he did briefly re-unite with his Accept band mates from 1993-1996 to produce three more Accept records, his solo career has been in full force since his original departure.  Mr. Dirkschneider has released thirteen albums under the U.D.O. moniker to date with the fourteenth, Steelhammer due to drop on May 24th, 2013.

I’ve long been an Accept and U.D.O. fan, since hearing “Balls To The Wall” as one of my earliest forays into metal music and I have all of the CDs.  A longtime dream came true for me last month as I finally got to see U.D.O. perform when the Steelhammer tour made a stop in Toronto. Right around my birthday I might add! The show was everything that I expected. I easily put it up there with one of the best shows of the year so far.  Please check out my review of the night here: U.D.O. IN TORONTO

In studying the album artwork, I once again reflected on the art form of the inner sleeves of a record, something that has lost its importance in this day and age of downloading.  The cover, matching my tour t-shirt from the show, depicts the power of what one might imagine of a “steelhammer”. Set to inflict destruction with a metalized fist poised to strike. As opposed to the general flaccidity of most of today’s efforts towards album artwork.

I had already heard one of the tracks during the show in Toronto about a month ago. Now as I received the much anticipated (by me, among others) newest U.D.O. effort, I sat down in my lazy-boy armchair in the dark with my eyes closed to listen to it.  The title track, “Steelhammer”, leads off the latest assault from the German Power Metal King. Containing everything that I would expect from an U.D.O. track.  U.D.O.‘s growling vocals are in fine form here as we roll into “A Cry Of A Nation” next with a grinding riff.

“Metal Machine” sits in the third position. This was the cut that I’d been treated to at the show in Toronto. The song came off well in a live set. The CD version does justice to the live version that’s rolling around in my memory.  The foreign language of the verse and chorus doesn’t take away from the enjoyment of the next track, “Basta Ya”. Even though I don’t understand it.  I think it’s not German, but perhaps Spanish. I found online that in Spanish basta ya means enough is enough.

Next comes 2:25 minutes of what I can only describe as an oddity and a deplorable tragedy!  I love U.D.O. and mean no disrespect, but singing a ballad is not something that he should do in my opinion.  “Heavy Rain” is shockingly just that as the piano is basically the only instrument to accompany Udo‘s guttural growl through this track. Although the more I hear it, the more I become accustomed to it.  After the synthesized intro, “Devil’s Bite” picks up the pace again. Feeling, as the title suggests, just like a bite from the devil as the riff chews through your speakers.

“Death Ride” follows and riffs hard straight off the top as Udo‘s gravelly, throaty vocals remind me of Accept classics on this track.  The barrage continues with “King Of Mean” powering through and getting my hands air drumming with a couple of pencils. I chuckled a bit at the line “I’m a chainsaw”.  The grinding, pumping riffs of “Timekeeper” surge the album forward. Keeping the pencils twirling and reminding me of how Udo stepped away from the stage front during the show. He held his eyes tightly closed as his head bobbed along as he felt rather than heard the music.

The chorus of “Never Cross My Way” echoes in my head long after the song dies away. I found myself singing it on more than one occasion at work as I flipped ribs on the grill.  I could definitely see this track played on rock radio as it has a bit of a commercial tinge to it. But don’t get me wrong it doesn’t detract from the song in any way shape or form!

The next track ramps up the energy again and is a fist pumping rocker called “Take My Medicine”. Although with U.D.O.‘s accent it sounds as if he’s saying “meda-seen”….lol.  “Stay True” just re-affirms that Udo‘s voice is just as good if not even stronger than the old Accept days as he snarls out the lyrics.  “When Love Becomes A Lie” also broaches the commercial sound with its pulsing rhythm beat, but maybe that’s just my wishful thinking that a radio station would actually play an U.D.O. cut!

Light bongo drums lead into “Book Of Faith”, conjuring up the image of a belly dancer dancing for the tribe before it twangs in evoking mental pictures for a second of the wild west and the deserted street with tumble weeds as the hero enters the town.  But then it opens up and pumps or throbs along as the second longest offering on the disc. And is just quirky enough to be my favourite on the whole record.  “Book Of Faith”‘s symphonic finish is a great closer to the song and the barrage that can only be called Steelhammer! 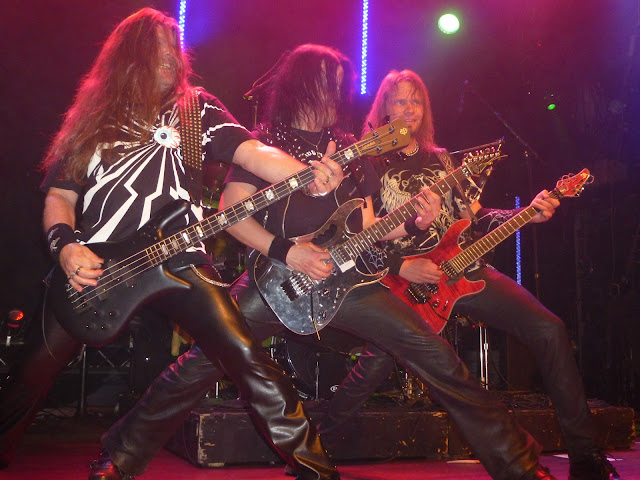 U.D.O.‘s latest effort from him and his band consisting of ten year band mate Fitty Weinhold on bass, relative newcomer guitarists, Kasperi Heikkinen and Andrey Smirnov and Francesco Jovino on drums is a true metal blitzkrieg. With the exception of the 2:25 minute ballad, “Heavy Rain” (which could be omitted).  That still makes thirteen solid rocking chants with the only other track clocking in under four minutes being the title track of “Steelhammer”, making the total album runtime of about sixty-one minutes.  Quite impressive again where many albums these days stretch to meet the standard ten song quota and many of those under the four-minute mark!

Udo‘s still rocking hard and giving solid efforts on his records and out on the road, so really can I blame him for trying something like “Heavy Rain”….no, certainly not and I have to admit, now that I’m over the shock of it and I’m on my tenth or so listening, it’s even growing on me.  A solid album here from The German Power Metal King and many of today’s artists could learn a thing or two or take a page from U.D.O.‘s book, I wish they would! 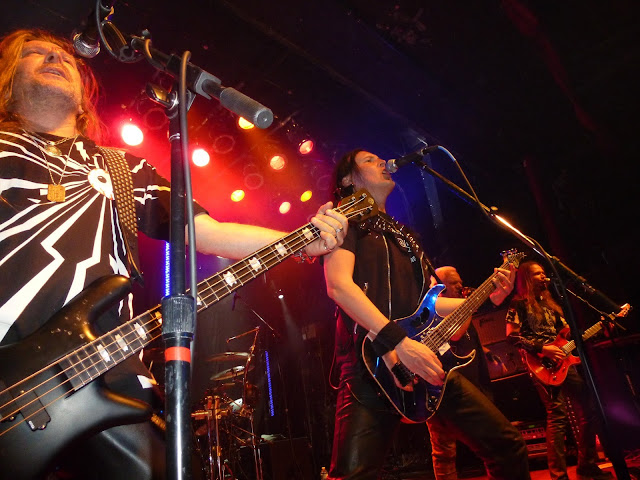 All concert photographs by: The Meister