VOLTURE – On The Edge (Album Review)

Not too long ago CGCM Podcast regular listener and past podcast guest Jason Kearney posted on the CGCM Facebook page. Recently visiting a record shop near his home, Jason picked up a vinyl release from a band called VOLTURE. He posted photos of the cover in the CGCM Group Page and suggested that it was something right up my (The Meister‘s) alley of listening choices. Trusting Jason‘s judgment and of course always looking for new musical discoveries, I searched it out and gave VOLTURE – On The Edge a shot.

Coming out of Richmond Virginia, this Heavy Metal band has been active since 2008. This album, On The Edge, is the sole full-length from the crew and saw the light of day in 2013. Previous to this there was a split, an EP, and a single all released.

VOLTURE – On The Edge (Album Review)

Nine tracks for about forty minutes of competent Traditional Metal awaits here in Volture – On The Edge. The majority of the tracks come in below four minutes in length for a speedy and attention-holding assault. Apparently, the vocalist Jack Bauer is new to Volture for this first foot forward. To me, he simply shines. Yes, he’s a little over the top with the high pitched screaming at points like on “Rock You Hard”. But that’s half of the fun to this style of Metal if you ask me, and Bauer delivers solidly in spades. Making up the band we find Twisted Tower Dire‘s Dave Boyd and Nick Poulos (guitars), Ryan Waste (bass) and Barry Cover (drums). 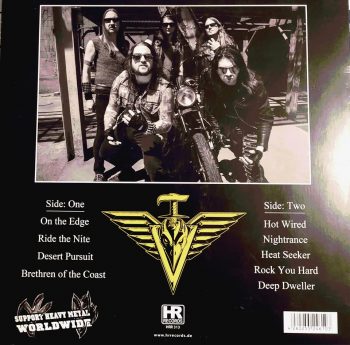 From the straight-up metal assault of the album’s lead-off track, “On The Edge”, to the closer, “Deep Dweller”, Volture takes the listener on a ride. That ride encompasses those aforementioned vocals with thunderingly audible bass thumps, impressive guitar riffage, song-fitting solos, and solid drumming. IMO, the best of the collection is the simply volcanic “Heat Seeker”. The driving riff and steady drums force the track forward at a high energy pace. The track builds into a real crescendo towards the end. Just the kind of fist-pumper ole Meister likes! I’ve placed a video sample below so you can listen for yourself.

But where have Volture gone? This is their first and last full-length? Six years of silence is a long span, so I must sadly conclude that Volture is either on an extended hiatus or finished. And that’s a tragedy for the Traditional Metal scene to lose a promising band such as this one. Thanks, Jason for pointing it out!