Why Boy Bands Aren’t Really So Bad After All 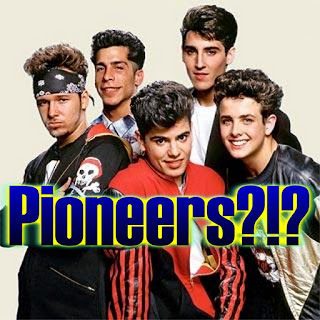 OK first off, don’t start setting up a fire to burn me in effigy. I’m not going to advocate the illicit use or distribution of metro-sexual, dance groups belting out rank pop to preteens. Nor will I even defend the profitability of these groups for the record company’s stockholders. What I will do is tell you why we should be appreciative of their existence, if not their cultural influence.

First, we must go back to the beginning. Most people automatically think of New Kids on the Block, or NKOTB as they were known when they tried to be “hard”, as the genesis of boy bands. They were, after all, probably the biggest money making example of crap marketability in the history of music to that point. In fact, even at this point, New Kids still have more lifetime album sales than Green Day, Pearl Jam, Red Hot Chili Peppers, Nirvana and Johnny Cash. Of course, when you look at the historic album sales rankings, you realize there are alot of people with crappy taste in music. How else can you explain that Kenny G has far outsold Motley Crue? You can’t, and that’s why I’m here.

But I digress. Even though the dancey-dance boys did manage to sell alot of albums to prepubescent girls squealing their way to the local Sam Goody at the mall, they did something far more important for the rest of us…they pissed us off.

For every evil, there is a good, every ying a yang. For every up there is a down. And, in this case, for every Donnie Wahlberg there is a Layne Staley. 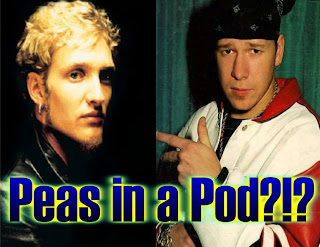 Yes, I did just invoke the hallowed name of Staley in the same sentence as Donnie Wahlberg. And just to be clear, that’s Donnie Wahlberg pre-Saw days. Long before he was in some, admittedly, pretty decent movies. Way back when he was the “bad boy” of boy bands.

You see, it can be traced back to a dark basement somewhere in the rainy city of Seattle. A guy named Layne was just chillin with his friends, probably throwing back some brews and listening to some Sabbath when all of the sudden, like a needle across an album, the radio breaks in with “Hangin Tough”. Well this could just not stand. This was crap and our friend Layne knew it right away. He got mad. He got pissed. He got Jerry Cantrell and they had a talk. At that moment, ole Layne loaded up his buddies, plugged in and proceeded to write some of the most kick ass music ever to escape the bowels of Hades. Thank you Donnie Wahlberg.

But even that isn’t all. You know, I know alot of KISS fans. And while I’ve never been mistaken for a marcher in the KISS Army, I do appreciate their music. They were, and are, important to the culture of Rock in the world. But I also know a secret. Even with the pyro effects, The platform boots and that dump truck Gene Simmons must have to use to transport his tongue, ego and continent sized balls in, they owe their success even their very existence to a boy band. Well, sort of. 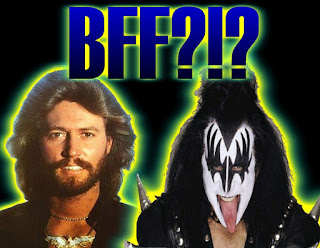 For all you KISS fanatics, the story of how Wicked Lester became KISS is probably as ingrained into your psyche as the sad little story of Twilight is to frustrated middle aged women everywhere. But what you may have not considered is the world into which KISS was born.

In 1971, dirty hippies still roamed the street complaining about how “big brother” was trying to keep them down. Love-ins and flower power was running amuck. In a natural defense to this, a misguided society created one of the most destructive forces ever to be unleashed onto the world, The Bee Gees.

Yes, The Bee Gees. Bell bottoms, butterfly collars and enough High Karate cologne to peel paint. In the defense of the people of 1971, even the nostril hair singing stench of High Karate was preferable to dirty hippy smell. Unfortunately, they went overboard and disco was unleashed.

But back to KISS.
The great musicians of the 60’s and early 70’s were dying off, nodding off or just simply failing to perform anything up to their previous standards. It appeared as if Disco was going to be the king of the 70’s. But Gene said “Hell no”, then stuck out his tongue, spit some stage blood and probably did your mom.
Throughout the decade there was a long, hard fought war between the Metal Mimes and the forces of polyester evil. The people had begged for an alternative to the skin crawling effect of the proto-Jersey Shore culture and KISS came to deliver.

If that’s not enough for you, check out these interesting reactions of how crap begat genius:
1975- Captain and Tenille gives us Motorhead
1981- Air Supply gives us Metallica
1986-Echo and the Bunnymen gives us Guns N Roses
1991-Marky Mark and the Funky Bunch gave us Rage against the Machine
1996- Hanson gives us Disturbed

So the next time you hear Justin Beiber any of the other interchangeable Disney friendly garbage spewers, be sure to thank them, because they just guaranteed that something great is coming.